Interviewer: the new version of Redis begins to introduce multithreading. What's your opinion?

To solve the above problems, Redis introduced Lazy Free and multithreaded IO in versions 4.0 and 6.0, respectively, and gradually transitioned to multithreading, which will be described in detail below.

To understand these problems, let's first understand how Redis works.

Redis server is an event driver. The server needs to handle the following two types of events: 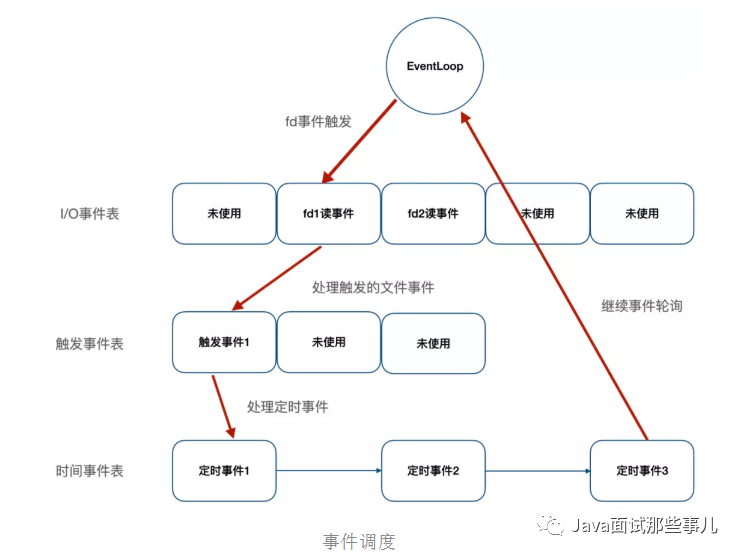 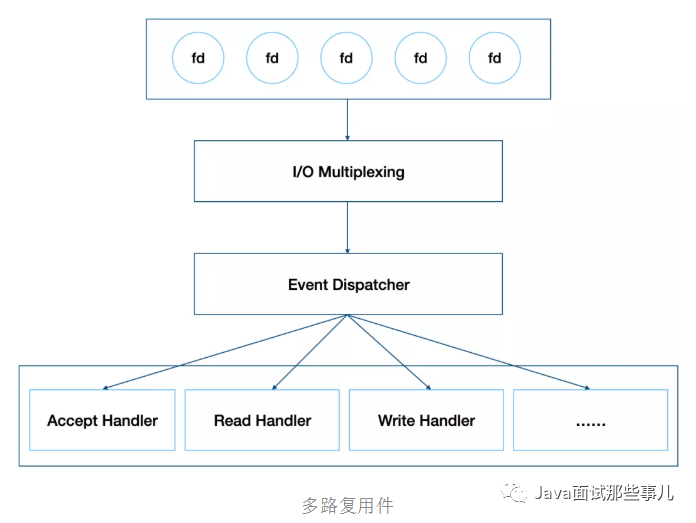 Because of this design, locking operation is avoided in data processing, which not only makes the implementation simple enough, but also ensures its high performance. Of course, Redis single thread only refers to its event processing. In fact, Redis is not single thread. For example, when generating RDB files, it will fork a sub process. Of course, this is not the content to be discussed in this article.

As we know above, Redis runs in the form of single thread when processing client commands, and the processing speed is very fast. During this period, it will not respond to other client requests. However, if the client sends a long-time command to Redis, such as deleting a Set key containing millions of objects, or executing flushdb and flushall operations, Redis server needs to reclaim a lot of memory space, It will cause the server to jam for several seconds, which will be a disaster for the cache system with high load. In order to solve this problem, Lazy Free is introduced in Redis version 4.0 to asynchronize slow operations, which is also a step towards multithreading in event processing.

As the author said in his blog, to solve the problem of slow operation, we can adopt progressive processing, that is, add a time event. For example, when deleting a Set key with millions of objects, only part of the data in the big key is deleted each time, and finally the big key is deleted. However, this scheme may cause the recovery speed to catch up with the creation speed, and eventually lead to memory depletion. Therefore, the final implementation of Redis is to asynchronize the deletion of large keys and adopt non blocking deletion (corresponding command UNLINK). The space recovery of large keys is implemented by a separate thread. The main thread only cancels the relationship, can return quickly and continue to process other events to avoid long-term blocking of the server.

Take delete (DEL command) as an example to see how Redis is implemented. The following is the entry of the delete function. lazyfree_lazy_user_del is whether to modify the default behavior of the DEL command. Once enabled, DEL will be executed in the form of UNLINK.

Synchronous deletion is very simple. Just delete the key and value. If there is an inner reference, it will be deleted recursively. It will not be introduced here. Let's take a look at asynchronous deletion. When Redis recycles objects, it will first calculate the recycling revenue. Only when the recycling revenue exceeds a certain value, it will be encapsulated into a Job and added to the asynchronous processing queue. Otherwise, it will be recycled directly synchronously, which is more efficient. The calculation of recovery income is also very simple. For example, for String type, the recovery income value is 1, while for Set type, the recovery income is the number of elements in the Set.

By introducing a threaded lazy free, redis realizes Lazy operation for Slow Operation, avoiding server blocking caused by large key deletion, FLUSHALL and FLUSHDB. Of course, when implementing this function, not only the lazy free thread is introduced, but also the redis aggregation type is improved in the storage structure. Redis uses many shared objects internally, such as client output cache. Of course, redis does not use locking to avoid thread conflict. Lock competition will lead to performance degradation. Instead, redis removes the shared object and directly adopts data copy, as shown in 3.3 X and 6 Different implementations of ZSet node value in X.

Removing the shared object not only realizes the lazy free function, but also makes it possible for Redis to stride into multithreading. As the author said:

Now that values of aggregated data types are fully unshared, and client output buffers don't contain shared objects as well, there is a lot to exploit. For example it is finally possible to implement threaded I/O in Redis, so that different clients are served by different threads. This means that we'll have a global lock only when accessing the database, but the clients read/write syscalls and even the parsing of the command the client is sending, can happen in different threads.

Multithreaded I/O and its limitations

Redis introduced Lazy Free in version 4.0. Since then, redis has a Lazy Free thread dedicated to the recovery of large keys. At the same time, it also removes the shared objects of aggregation type, which makes multithreading possible. Redis also lives up to expectations and implements multithreaded I/O in version 6.0.

As the official reply before, Redis's performance bottleneck is not on the CPU, but on the memory and network. Therefore, the multithreading released in 6.0 does not change the event processing to multithreading, but on I/O. in addition, if the event processing is changed to multithreading, it will not only lead to lock competition, but also frequent context switching, that is, using segmented locks to reduce competition will also make great changes to the Redis kernel, and the performance may not be significantly improved.

As shown in the figure above, the red part is the multi-threaded part implemented by Redis. Multi cores are used to share the I/O read and write load. Each time the event processing thread obtains a readable event, it will allocate all ready read events to the I/O thread and wait. After all I/O threads complete the read operation, the event processing thread starts to execute task processing. After processing, it will also allocate write events to the I/O thread and wait for all I/O threads to complete the write operation.

From the above implementation, multithreading in version 6.0 is not complete multithreading. I/O threads can only perform read or write operations at the same time. During this period, the event processing thread has been in a waiting state, not a pipeline model, and there are a lot of rotation waiting overhead.

Compared with the 6.0 version of multithreading, Tair's multithreading implementation is more elegant. As shown in the figure below, Tair's Main Thread is responsible for client connection establishment, IO Thread is responsible for request reading, response sending, command parsing, etc., and Worker Thread is specially used for event processing. The IO Thread reads and parses the user's request, and then puts the parsing result in the queue in the form of command and sends it to the Worker Thread for processing. Worker Thread generates a response after processing the command and sends it to IO Thread through another queue. In order to improve the parallelism of threads, lockless queues and pipes are used for data exchange between IO threads and worker threads, and the overall performance will be better. 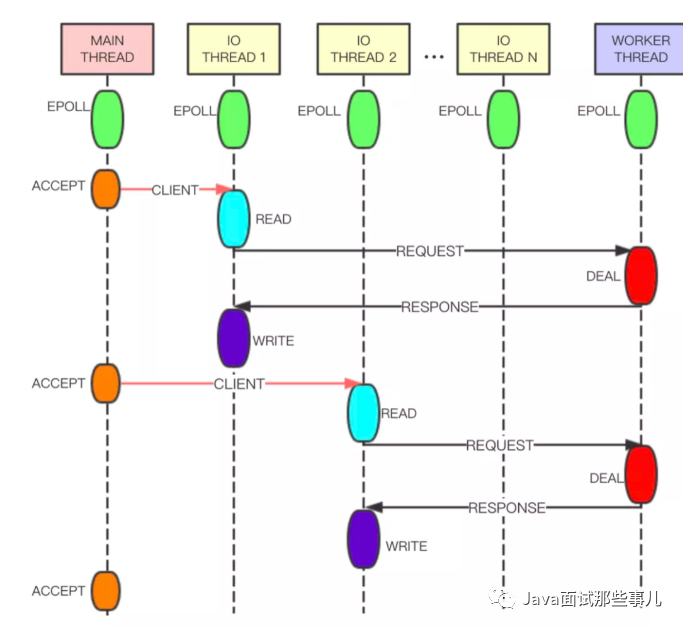 I/O threading is not going to happen in Redis AFAIK, because after much consideration I think it's a lot of complexity without a good reason. Many Redis setups are network or memory bound actually. Additionally I really believe in a share-nothing setup, so the way I want to scale Redis is by improving the support for multiple Redis instances to be executed in the same host, especially via Redis Cluster.

What instead I really want a lot is slow operations threading, and with the Redis modules system we already are in the right direction. However in the future (not sure if in Redis 6 or 7) we'll get key-level locking in the module system so that threads can completely acquire control of a key to process slow operations. Now modules can implement commands and can create a reply for the client in a completely separated way, but still to access the shared data set a global lock is needed: this will go away.

Redis authors prefer to use clustering to solve I/O threading, especially in the context of the native Redis Cluster Proxy released in version 6.0, which makes the cluster easier to use. In addition, the author prefers slow operations threading (such as Lazy Free released in version 4.0) to solve the multithreading problem. It is really worth looking forward to whether the subsequent versions will improve the implementation of IO Thread and adopt Module to optimize slow operation.