I haven't updated it for a long time, not because I didn't learn, but because I didn't know how to write it. At the same time, there was a voice telling me that public numbers are flying all over the world. There are more people writing public numbers than reading public numbers, and there are too many articles with topic....But I think later on, although there are many similar articles, they are not written by me. Writing by myself will help to sort out the relevant knowledge. If it just helps you, it will be better. So white teeth still encourage you to output more, forcing input backwards through output, and the gains only know when you have done so. 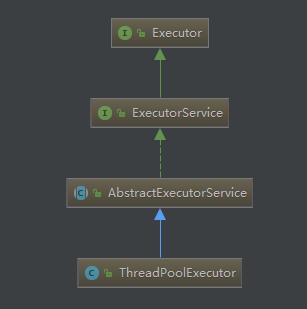 From the class diagram, ThreadPoolExecutor is an ExecutorService that can perform tasks through threads in the pool

You have to admire the big guys who write JDK source code and use a variable so well that the ctl variable expresses both the state of the thread pool and the number of threads through bitwise operations. Here's how

Is it clever to see these methods often in the source code?

If you want to see the binary representation of the above variable, you can view it by the method Integer.toBinaryString(int i)

Creating a thread pool is as common as the above parameters, which are briefly described below

When using a thread pool, we typically call the ThreadPoolExecutor.submit(task) method, hand the task directly to the thread pool to process, and then return to us a Future where we can get the task results later through the Future.get() method

The newTaskFor method encapsulates the task into a RunnableFuture class, and the result is obtained by the get method

When a task is committed to the thread pool, determine if the number of threads running is less than corePoolSize, and if it is less than, create a new thread to process the task even if other threads are idle.

If the task queue is full and the number of threads running is greater than corePoolSize and less than maximumPoolSize, a new thread is created to execute the task.

First, it checks whether a new worker thread can be created based on the current state of the thread pool and the boundary between the number of threads (core or maximum).If you can, create a new worker thread, start it, and then perform the tasks passed in

When introducing the addWorker method, there is a logic that if a newly created woker thread is successfully added to the woker thread set, the thread's start method is invoked, and the Worker's run method is actually executed at the end.Because Woker's constructor is a thread created through a thread factory, the analysis follows

Create threads through the thread factory, and finally call Thread's constructor, Thread(... Runnable target...), to execute a task to create a thread as a target parameter, then call the Thread.start method to execute the run method, then execute the target.run, similar to a proxy

Then you can execute our worker's run method, which calls the runWorker method again. Let's look at this method

Continuously take tasks from the task queue and execute them

In the runWorker method, there is a getTask method, which is briefly described below

2. Return null, in which case the worker thread needs to exit because the number of threads has decreased. There are four possible reasons for this

There is also a processWorkerExit method in the runWorker method that performs cleanup, which is described briefly below

If you read this article here carefully in combination with the source code, you should have a little bit of a feeling about how thread pools work?The last thing left is the thread pool shutdown method

This article was written on vacation and is a little comb of thread pool knowledge. Of course, there may be some problems in it. White Teeth wants you to criticize the inheritance. If you find problems, you can go to Public Number (White Teeth every Day) message and point out that you can also add my WeChat (dingaiminIT) to exchange discussions.

Triple-sided Ali was hung up, thanks to the number of introductory quotas, after five-sided access to word-of-mouth offer

The real culprit of frequent FGC s was it

The older generation accounts for 100% more, and vertx-redis-client bug s are found by the way

How is Redis's expiration strategy implemented?

Origin | If you understand both of HashMap, the interview will be OK

Origin|Interviewer: Do Java objects have to be allocated on the heap?