What is topological sorting? 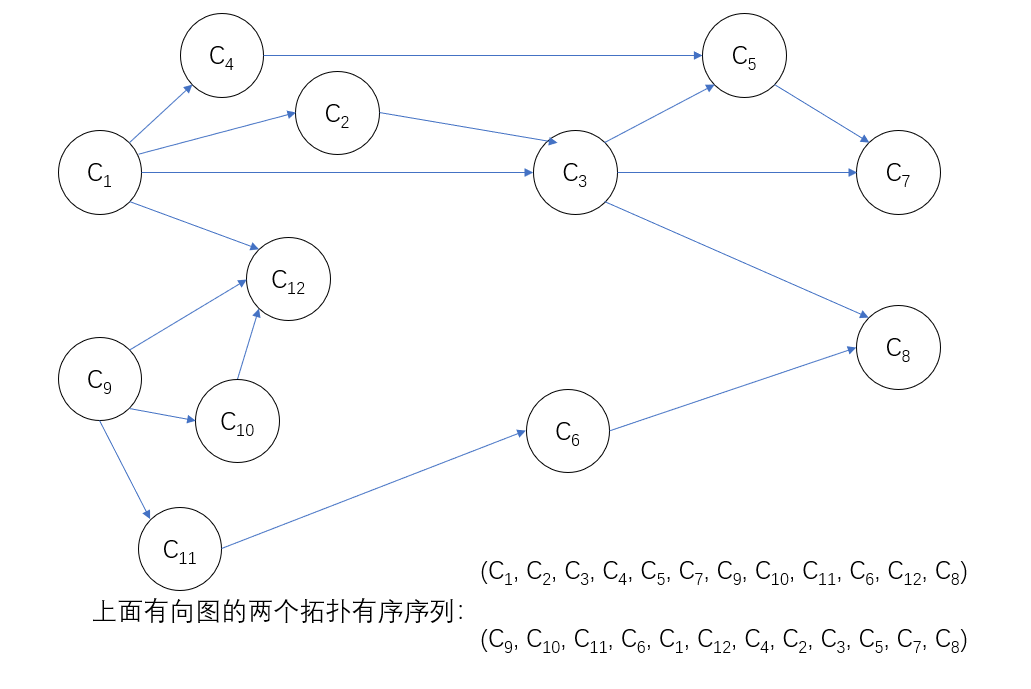 How to sort topology?

repeat the above two steps until all vertices have been output, or there are no vertices without precursors in the current graph. The latter case shows that there are rings in a directed graph.

we use the adjacency table as the storage structure of the directed graph, and add an array of vertex entry degrees in the head node. The vertex with zero penetration is the vertex without precursor. The operation of deleting the vertex and the arc with its tail can be realized by subtracting 1 from the penetration of the vertex at the arc head.

for a digraph with n vertices and e arcs, the time complexity O(e) for finding the penetration of each vertex is established; The time complexity of building zero input vertex stack is O(n); In the process of topological sorting, if the directed graph is acyclic, each vertex enters and exits the stack once. The operation of entering degree minus 1 is executed e times in the WHILE statement. Therefore, the total time complexity is O(n+e).
when there is no ring in the directed graph, the depth first traversal can also be used for topological sorting. Because there is no ring in the graph, when the depth first search traversal starts from a point in the graph, the vertex that exits the DFS function first, that is, the vertex with zero degree, is the last vertex in the topological ordered sequence. Thus, the vertex sequence recorded in the order of exiting the DFS function (like the vertex sequence in the finished array when calculating the strongly connected component) is the reverse topological ordered sequence.

What is the critical path?

in AOE network, all activities can reach the end point only after they are completed. Therefore, the time (i.e. the shortest construction period) required to complete the whole project should be the maximum path length from the source point to the end point. The path with the maximum path length is called critical path. The activities on the critical path are called critical activities.
assuming that the starting point is V1, the longest path length from V1 to Vi is called the earliest event of event Vi. This time determines the earliest start time of all activities represented by arcs with Vi as tail. We use e(i) to represent the earliest start time of activity ai. You can also define the latest start time l(i) of an activity, which is the time when the activity ai must start at the latest without delaying the completion of the whole process. The difference l(i)-e(i) means the time margin to complete the activity ai. We call the activity of l(i)=e(i) key activity.

How to find the critical path? 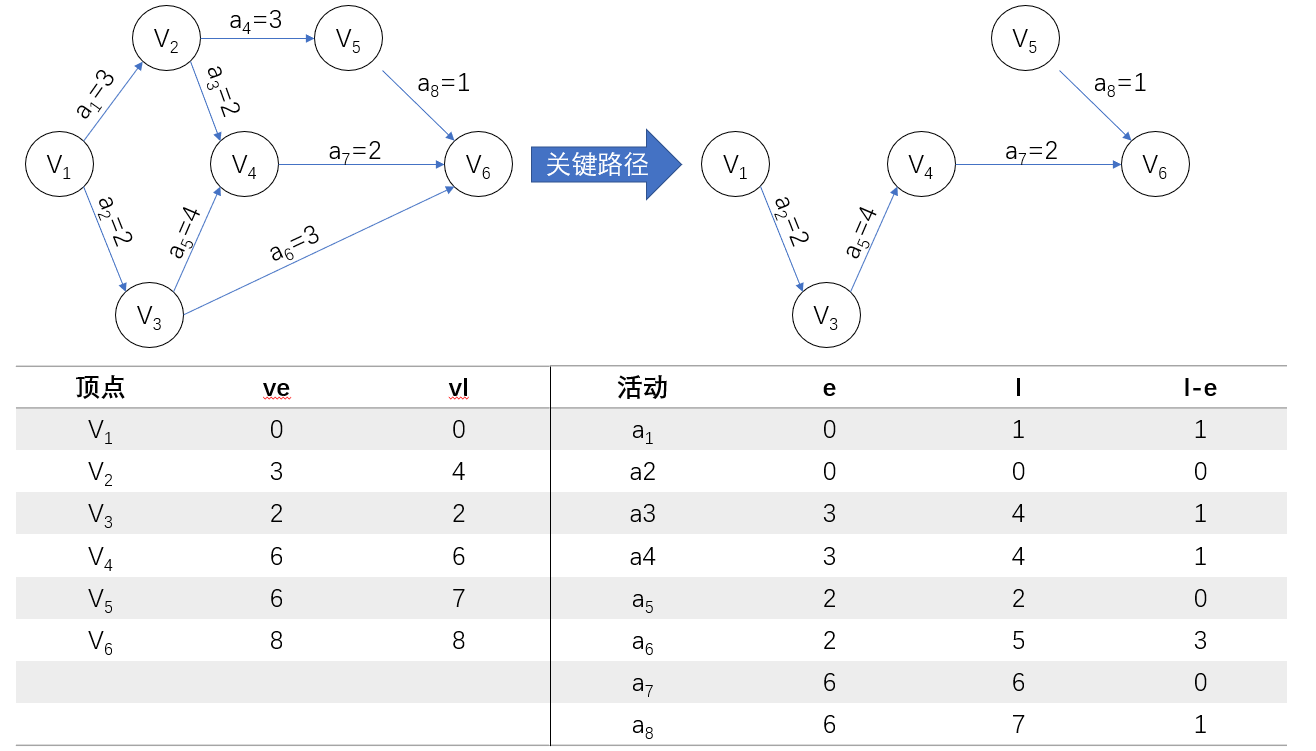 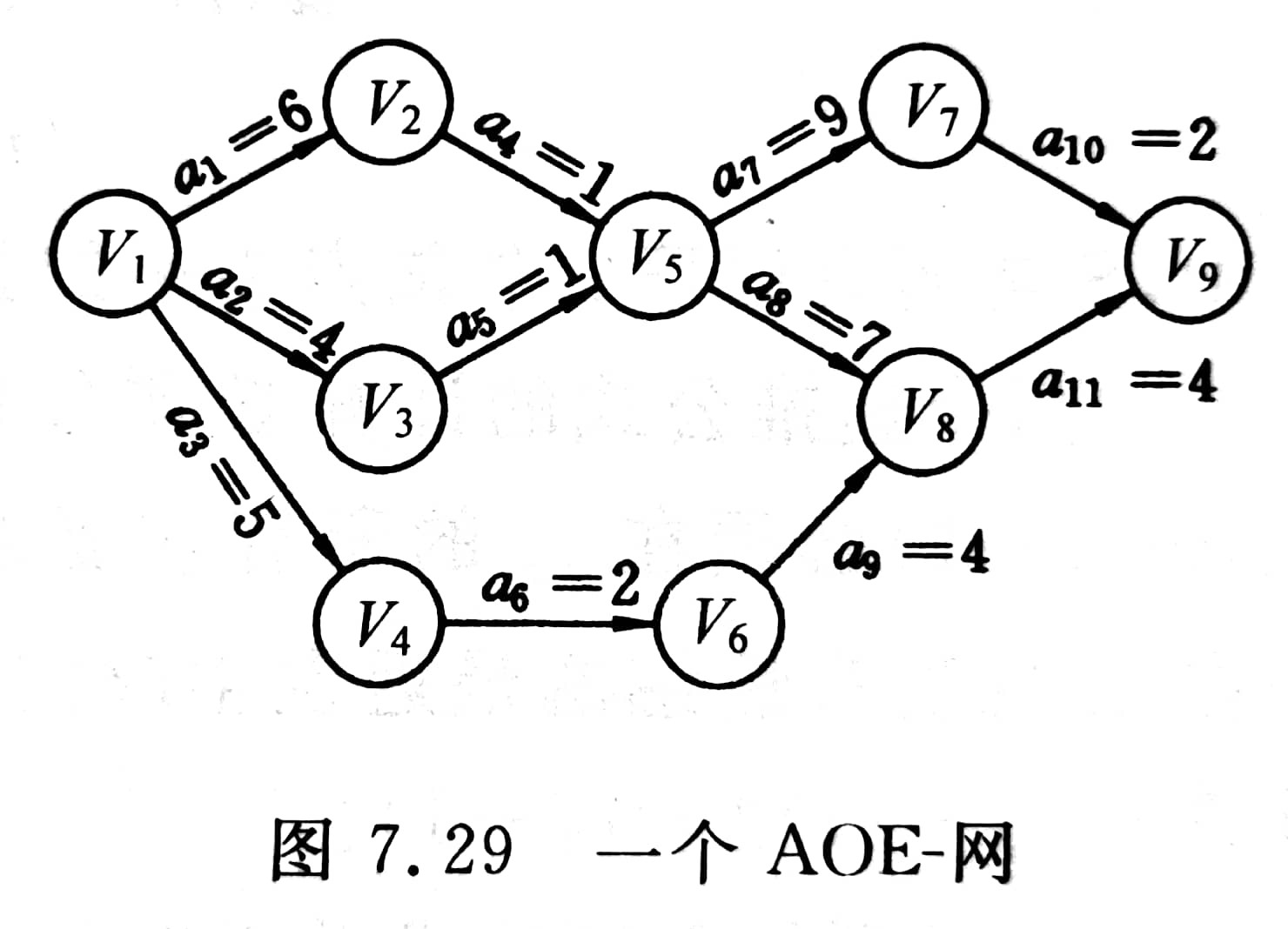