When it comes to object-oriented (OO), your first reaction must think of concepts such as class, object and interface implementation. Why do we talk about object here? Because there is no class in ECMAScript, and because the function in ECMAScript has no signature, there is no interface.

The object in ECMAScript-262 is defined as "a collection of unordered attributes, whose attributes can be basic values, objects or functions". Therefore, from the perspective of data structure, objects can be regarded as hash tables.

From the way of creating objects, objects can be divided into three categories: built-in objects, host objects and custom objects. More about object classification Click here.

It should be emphasized that except for the six basic types of number, string, boolean, null, undefined and symbol, all other types are objects (reference types), including functions. All functions are objects, and vice versa.

Relationship between objects and functions

As mentioned earlier, there are no classes in ECMAScript, so how to create objects?

This method mainly has the following problems:

This method is almost perfect and solves the problem of object recognition, but it still does not solve the problem of shared function polluting the global space; In order to solve this problem, let's show our protagonist prototype.

Finally, let's get to the point. To solve the problems faced in the above method 3, we need to have an object that belongs to the constructor exclusive (not defined to the global pollution global space) and can be shared by all object instances created by the constructor. This object is the prototype (or prototype object).

What is a prototype

How does the above example wangwu find the greeting defined in the Prototype object? The reason is that all objects have an internal pointer to the Prototype object of the instance constructor, which is called [[Prototype]] in ECMAScript-262 version 5. Although the standard does not define how to access this internal pointer, Firefox, Safari and Chrome support an object named__ proto__ Pointer properties.

View the properties of wangwu in the chrome console, as shown in the following figure:
[uploading pictures outside the station... (image-1d07-164413611733)]

When an object instance accesses a property or calls a method, first find it in its own property. If it finds it, it will return the value or initiate the call. If it doesn't, it will follow__ proto__ Look up until you finally find the object If the prototype is still not found, it will terminate and report an error.

The relationship among object instance, constructor and prototype object of constructor is as follows: 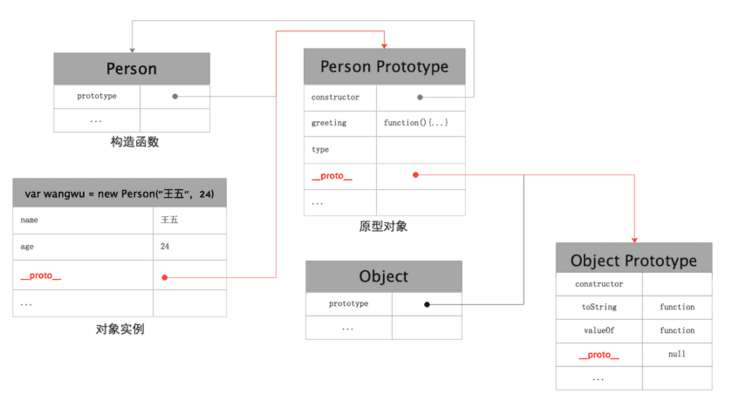 After covering the whole prototype object, the original prototype point in the above figure is cut off and points to the new prototype.

By default (because the prototype object is actually writable, it can be changed):

As we know, for number, string, boolean, undefined and function values, we can simply distinguish them by typeof operator. However, for reference type instances other than function and null, typeof returns "object", but if we distinguish them in detail, if an object instance is an instance of God type, typeof can't help it.

In particular, after assigning a value to the prototype attribute, Men prototype. The constructor points to Person, so you must point it back to Men.