In the previous article, we introduced the basic use of rust in UEFI. In this chapter, we started to write the basic UEFI settings, mainly including File structure and UEFI compilation script to simplify the kernel File reading and qemu startup process

In addition to meeting the basic use of our program, the Result we designed is compatible with the Result of UEFI service. Therefore, we can command two kinds of results again through type. Secondly, we need to be compatible with the error of UEFI service, but we still need to distinguish between UEFI exception and UEFI application exception. Therefore, we need to design an enumeration Repr to distinguish the two kinds of exceptions

According to the Result, we can easily define the following structure

The Error of the second Result is our custom Error, which is divided into two kinds of UEFI execution errors and application custom errors, so we can use an enumeration to complete it

In the Repr, there are two structures, Efi and Custom, which are defined as follows

The main difference between Custom and Efi is that kind is our Custom error type. Status indicates the status code of the execution error of UEFI service (status is actually the mapping between the enumeration of rule and C, but UEFI RS does not simply map to the enumeration of C because it will generate UB (undefined behavior), but adopts the newtype_enum macro for processing)

Next, we provide as? Str() method for the two structures. The implementation of ErrorKind is relatively simple. The following part of the code

But there are some differences in as STR to implement Efi structure. We can't write such code

As mentioned above, if you look at the source Status simply, it's really like enumeration, but it's actually a structure, so we need to judge it as the specific value in Status

All Status results are listed for completeness

ERROR_BIT is defined in uefi-rs/src/result/status.rs, this structure is not pub, so we redefined this structure in our own files (only for reading, not for other purposes)

So we can define the structure of Error

Finally, we provide the matching method of Error

In order to display Error information when an Error occurs, we need to implement Displaytrait for Error

After modification, the old Ok(T) and Err(T) cannot be used (one idea is to combine UefiResult and Result, so that it can be used as usual without testing the feasibility)

So we have finished the Result design

We have defined the basic functions of each trait, and we will enrich our trait functions in the future

The new function here is just an auxiliary operation, because we need to provide the new and try new functions as follows

After the try ﹣ new function, we turn the underlying uefi service error into uefi application error, so we don't need to deal with nested results
Of course, we can also provide functions that can specify the buffer size

First, we complete the first step: read the file information FileInfo in the root directory

Step 2: get the file attribute FileAttribute

Finally, we define the open function

It is worth noting that the contents of the root attribute, open and open functions cannot be written in one function. The compiler will prompt a variable borrowing, an immutable borrowing, and FileInfo not implementation copy trait and other errors
We notice that the return value of open is FileOperator, which is defined as follows

FileOperator will implement Read,Write,Seek and other trait s. The implementation is relatively simple, which will not be explained here

These methods are mainly reused by SimpleFileSystem. Our main focus is to design and provide convenient APIs. Let's design the read API first

Read  transact mainly reads the specified number of bytes and fills them into the given slice. The following is the read  transact flowchart 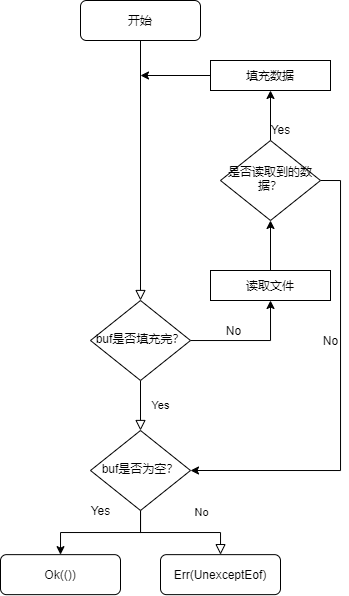 Read ﹣ to ﹣ end reads all bytes until it encounters EOF, and fills the read data into buf. The following is the flow chart of read ﹣ to ﹣ end 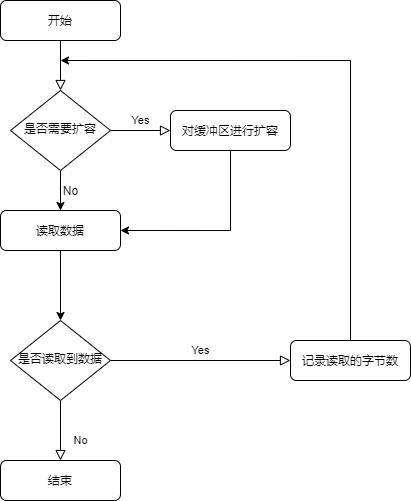 Guard will complete the above two operations. The time to set the buffer size should be at the end of guard's life cycle. Therefore, the buffer size needs to be set before guard is dropped, so we can override the Drop track

Now we have another expansion problem to solve. In the alloc library, we have implemented the function reserve for Vec. After the expansion, we need to reset the buffer capacity
Then initialize the newly applied memory space, so we also need a data structure Initializer for initialization, which is defined as follows

The initialization function is relatively simple, which is not covered here

So our expansion operation can be written in this way. Here is the pseudo code

The judging condition of insufficient buffer capacity is that the length of buffer in Guard is equal to the length of buffer
Accordingly, each time we read, we only need to read the data in the newly added memory, so we can write the read operation as follows

Read ﹣ to ﹣ end ﹣ with ﹣ reservation is the auxiliary function of read ﹣ to ﹣ end. The generic parameter f: fnmut - > use is used to specify the size of the expansion

Corresponding to our Readtrait, we need to add the initialization function (including the previously written read_exact function)

Then we can define the read ﹐ to ﹐ end function

Then add the read ﹐ to ﹐ end function to Read trait

The implementation of the write all function is simple, just loop in

If you have read the code of std::io, you will know that this is the modified version of the official library, which is applicable to our current uefi environment

What is the next step?

In the next article, we need to recognize and analyze elf files, because our kernel is compiled with ELF files. With the convenient api provided in this chapter, it will be more convenient to parse elf files