In this series, I will share the whole process of making my "voice annotation" plug-in, or is that sentence "process" more interesting than "result". 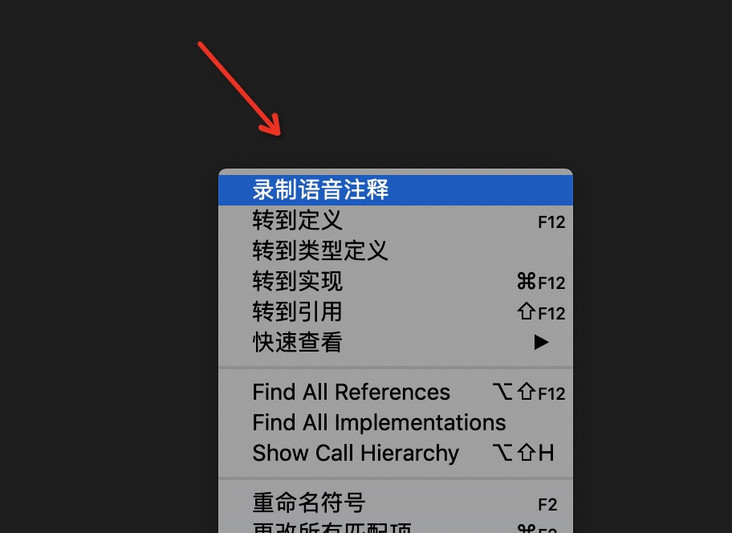 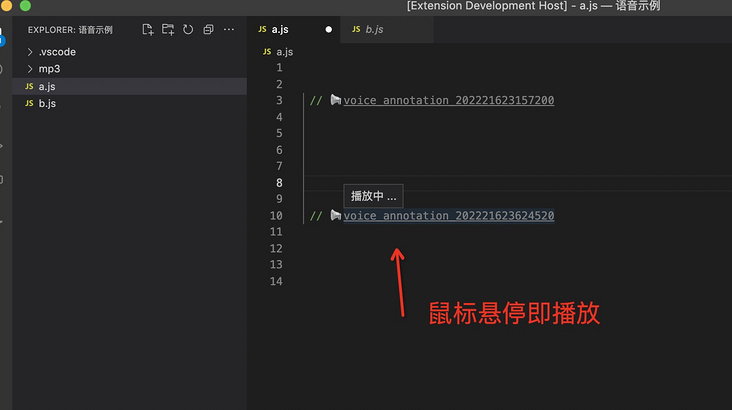 When you start reading an engineering code, you may occasionally read some code that you don't know. If it has comments but is still confused after reading it, or it doesn't write comments at all, the most convenient way to solve this problem is to ask the original developer directly. Why do students write this here?

Not only js language, but also most languages have provided the syntax of "text annotation". Why do we still encounter the above problems? Suppose we write comments in each piece of code, but we still can't understand them. Let's see what problems we can "alleviate" through the voice plug-in:

Students who have not done vscode plug-in are recommended to read the introductory tutorial I wrote first:

We need to agree on a specific writing method. The plug-in recognizes this writing method as "voice annotation" and can broadcast correctly when the mouse hovers over it. At present, I use / / voice_annotation + _ Numbers are in this form.

Since it is written in vscode, in fact, the first choice is to use node to control the audio output device. If you play sound by opening a new web page, it will increase the user's operation link. We investigated the existing audio plug-ins in the market, mainly music playback plug-ins or by opening a web page, However, there are no other operations for playback here, such as fast forward loop playback and other slightly more complex requirements, so we choose to use node playback.

If you want eggs, of course 🐔 For egg laying, the recording function must be able to put the user's recording into the corresponding project and return to the writing method of the user's' specific comment ', assuming that voice is returned_ annotation_ In 20201, users can use it normally by pasting it directly into the project. There should be few usage scenarios for this function, so performance related issues should be considered.

2, In the initial project, this time we use ts

Install the vscode development tool globally and initialize the project: 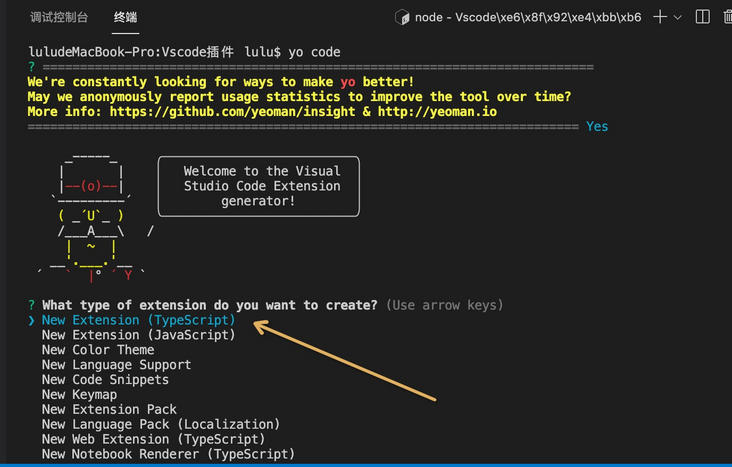 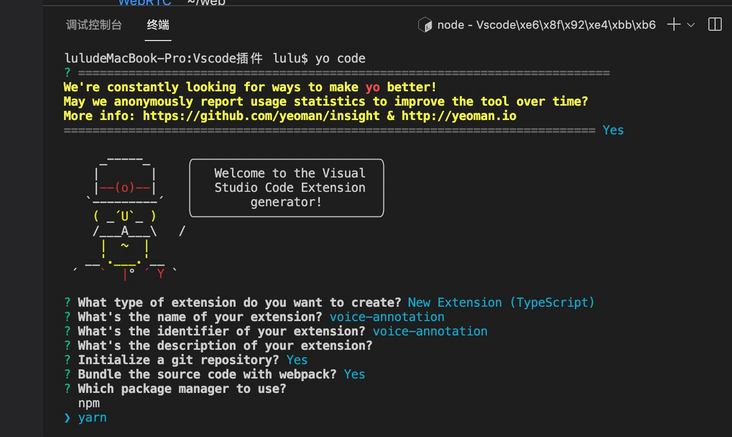 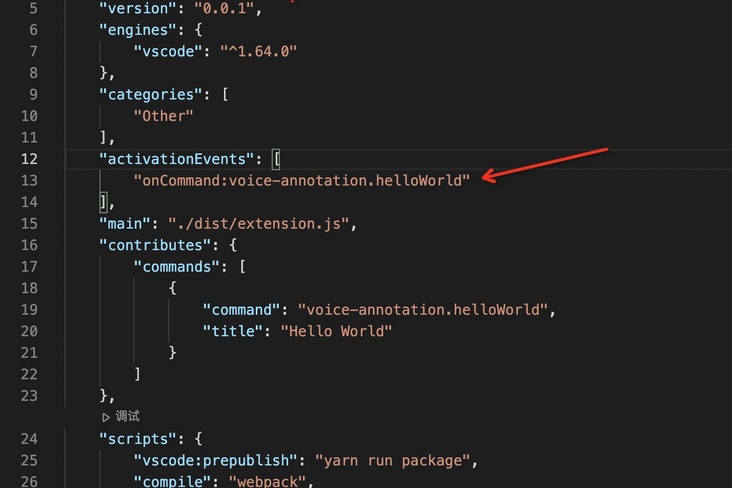 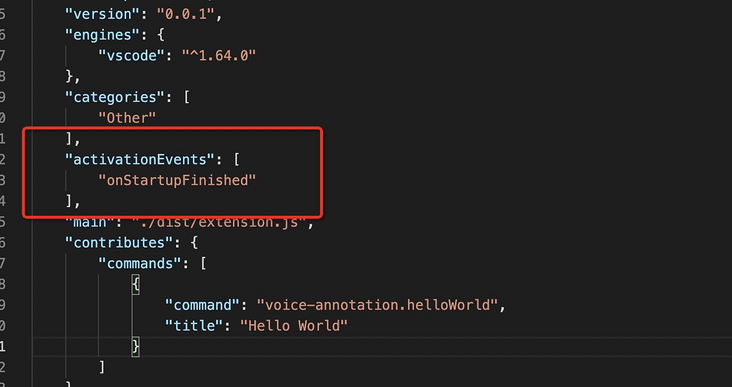 onStartupFinished specifies that the plug-in starts after the vscode initialization is completed. It will not occupy the performance of the user when initializing vscode, and our voice annotation is not a very urgent program. 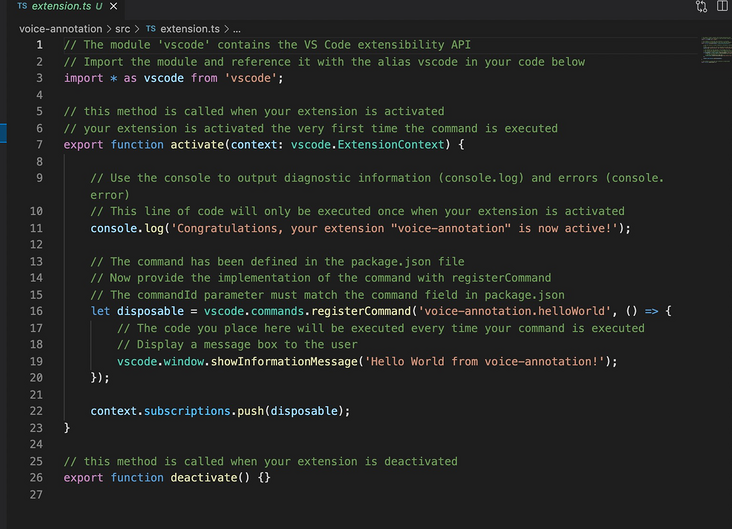 Start compiling the code after executing yarn watch, and the fn + F5 debugging code will report an error:

I was also confused when I saw the error report above. I didn't seem to have encountered it before. I upgraded the vscode editor or reported an error, and then went to the code to check:

This is very clear. We just circled a compatibility range. We checked the official website log and finally selected the version with a minimum of around October 2020.

Sure enough, a prompt box will appear after debugging again:

Note:
The @ types/vscode below should also be changed to the same version number as above, otherwise there will be no error at this stage, and an error will be reported when packaging and publishing.

This function is to identify and highlight the "voice annotation" on the page. The reason for giving priority to the development of this function is that it is relatively independent in its own function and can see the effect intuitively. When browsing the official website of vscode, I found two ways to achieve the effect of "highlighting" of specific sentences.

For example, function () {} in js is the syntax of the function. In belongs to the keyword. These meaningful expressions will be given various' highlights'. Then we can use / / voice_annotation is set as keyword,

Step 1: in package The JSON file is added to the scope of jojo

It works on js, ts and tsx files. 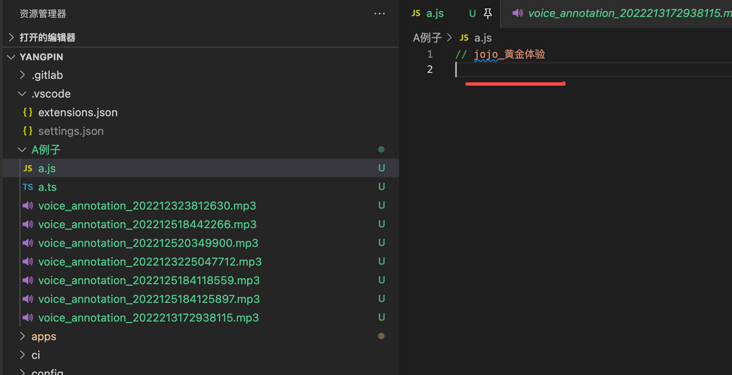 This scheme has many disadvantages, such as bad 'custom style', bad dynamic change settings and so on. Finally, I didn't choose this implementation method.

That is to get all the text content of the current 'document' and give it the ability of css style. This method is more flexible and can achieve some interesting effects through pseudo elements.

First, we need to abstract an initVoiceAnnotationStyle method separately, which is specially used to set the style of voice annotation to facilitate the recognition of "voice annotation" anytime and anywhere:

The knowledge here is very interesting. Let's talk about it with the screenshot

We can adjust the style through the vscode developer tool 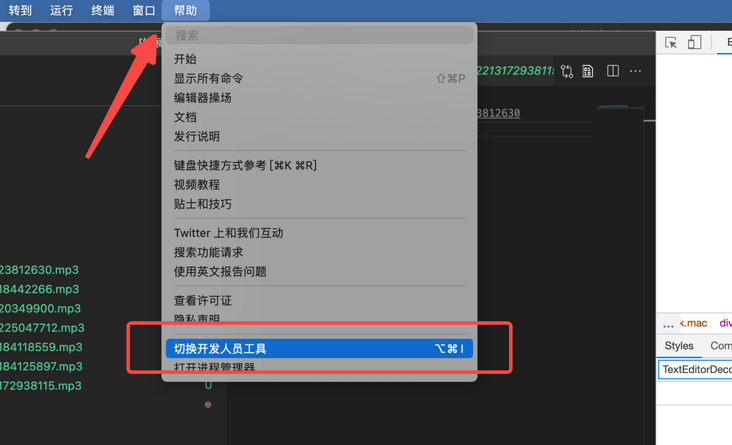 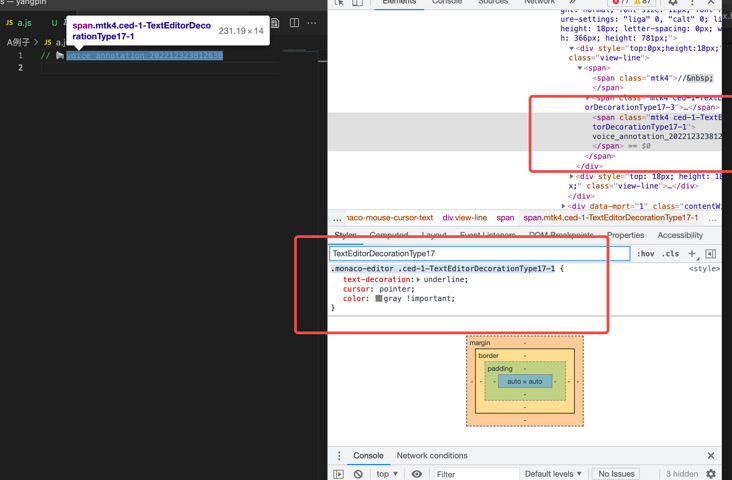 First of all, we need to define a hover module, which is responsible for the style after hover + playing audio.

The next article should talk about how vscode plays sound, how audio files are transmitted and stored, and so on. Wait for me to jump. This is it this time. I hope to make progress with you.