What exactly is the ScodendaryNameNode for HDFS

What does HDFS Secondary NameNode do?

Obviously, it is unreliable to keep metadata in memory only, so it needs to be persisted to disk as well. There are two types of files inside the NN that are used to persist metadata:

Both types of files are stored under the ${dfs.namenode.name.dir}/current/path to view their contents:

To avoid large edit log files and shorten the time it takes to recover metadata at NN startup, we need to periodically merge edit log files into fsimage files, which are called checkpoint s (the word is really rotten).

Hadoop has introduced SNN s to take care of this since the burden of NNs is so heavy that it is not scientific to allow it to perform I/O-intensive file merge operations.
That is, the SNN is the role that assists the NN in checkpoint operations.

The trigger of checkpoint is controlled by two parameters in hdfs-site.xml.

Whenever one of these two parameters is satisfied, the checkpoint process is triggered, as described below:

The official Hadoop diagram is shown below. Although the file names are different, the ideas are the same. 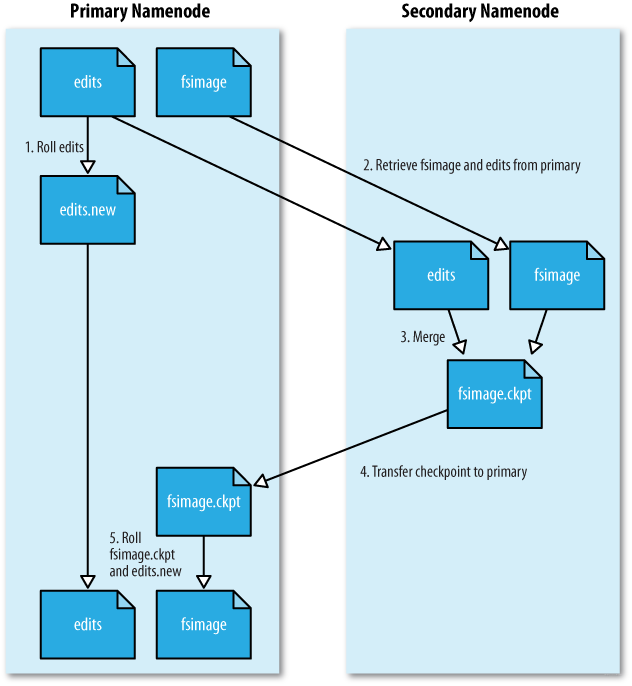 In addition, to avoid taking up too much disk space for fsimage files, the dfs.namenode.num.checkpoints.retained parameter allows you to specify how many fsimage files to keep, with a default value of 2.