Which of the seven distributed global ID generation strategies do you prefer?


After microservices, many originally simple problems have become complex, such as global ID!

Brother song just used this content in his recent work, so he investigated several common global ID generation strategies on the market and made a comparison for his partners' reference.

After the database is divided into databases and tables, the original primary key self increment is inconvenient to continue to use. It is necessary to find a new and appropriate scheme. SongGe's demand is put forward under such circumstances.

Next, let's touch it together.

On the whole, there are two different ideas on this issue:

These two ideas correspond to different schemes. Let's look at them one by one.

The structure after the database is divided into databases and tables is shown in the following figure (assuming that MyCat is used for Database Middleware): 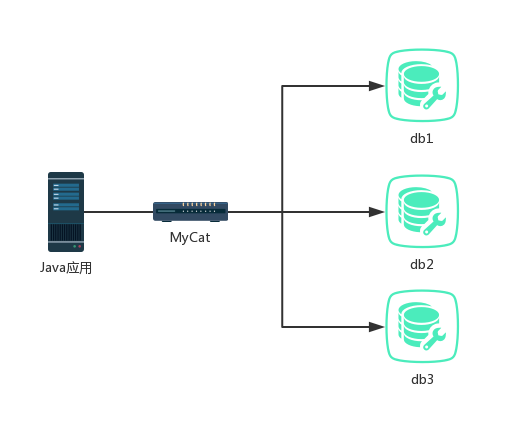 Find the cause of the problem, and the rest will be solved.

We can directly modify the starting value and step size of self increment of MySQL database primary key.

First, we can view the values of the two related variables through the following SQL:

You can see that the starting value and step size of the self increment of the primary key are 1.

The starting value is easy to change. It can be set when defining the table. The step size can be achieved by modifying this configuration:

After modification, check the corresponding variable value and find that it has changed:

At this time, we insert data again. The primary key auto increment is not 1 each time, but 9 each time.

As for the self increment starting value, it is actually very easy to set. It can be set when creating a table.

But obviously, this method is not elegant enough, and it is troublesome to handle, and it is inconvenient to expand in the future, so it is not recommended.

If you happen to use MyCat in the database and table splitting tool, you can also well realize the global self increment of the primary key in combination with Zookeeper.

Here we mainly look at scheme 4.

The configuration steps are as follows:

Note that the name of the table here should be capitalized.

Finally, restart MyCat, delete the previously created table, and then create a new table for testing.

This method is easier and more scalable. If you choose MyCat as the database and table tool, this is the best scheme.

The two methods mentioned above deal with the self increment of primary key at the database or database middleware level. Our Java code does not need additional work.

Next, let's look at several schemes that need to be processed in Java code.

The easiest thing to think of is UUID (universal unique identifier),
The standard type of UUID contains 32 hexadecimal digits, which are divided into five segments by hyphen and 36 characters in the form of 8-4-4-4-12. This comes with Java and is easy to use. The biggest advantage is that it is generated locally and has no network consumption. However, all partners who develop in the company know that this thing is not used much in the company's projects. The reasons are as follows:

Therefore, UUID is not the best solution.

At the same time, because the time bits are monotonically increasing, and if each server roughly synchronizes the time, the generated primary keys can be considered to be generally orderly in the distributed environment, which ensures the efficiency of inserting index fields.

For example, the primary key of MySQL's Innodb storage engine. The binary representation of the primary key generated by the snowflake algorithm consists of four parts. From high to low, it is divided into 1 bit symbol bit, 41 bit timestamp bit, 10 bit work process bit and 12 bit serial number bit.

The era of ShardingSphere's snowflake algorithm starts from 0:00 on November 1, 2016 and can be used until 2086. I believe it can meet the requirements of most systems.

This flag is unique within the Java process. In case of distributed application deployment, ensure that the id of each working process is different. The default value is 0, which can be set through the property.

This sequence is used to generate different ID S in the same millisecond. If the number generated in this millisecond exceeds 4096 (the 12th power of 2), the generator will wait until the next millisecond to continue the generation.

Below, SongGe gives a tool class of snowflake algorithm, which you can refer to:

The usage is as follows:

Leaf is an open source distributed ID generation system of meituan. The earliest requirement is the order ID generation requirement of each business line. In the early days of meituan, some businesses directly generated IDS through DB self increment, some businesses generated IDS through Redis cache, and some businesses directly generated IDS through UUID. The above methods have their own problems. Therefore, meituan has decided to implement a set of distributed ID generation services to meet the needs. At present, leaf covers many business lines of meituan review company, such as internal finance, catering, takeout, hotel tourism, cat's eye film and so on. On the basis of 4C8G VM, the QPS pressure measurement result is nearly 5w/s and TP999 1ms (TP=Top Percentile, Top percentage, is a statistical term, which is similar to the average and median. TP50, TP90, TP99 and other indicators are commonly used in the system performance monitoring field, which refers to the situation higher than the percentile of 50%, 90%, 99%).

At present, there are two different ideas for the use of LEAF, segment mode and SNOWFLAKE mode. You can enable both modes at the same time or specify a certain mode (the two modes are closed by default).

After we Clone LEAF from GitHub, its configuration file is leaf server / SRC / main / resources / leaf In properties, the meaning of each configuration is as follows: 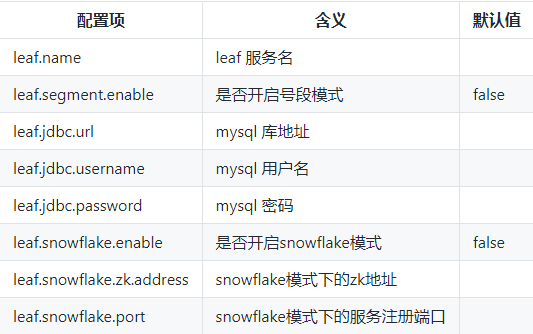 The segment mode is still based on the database, but there are some changes in the idea, as follows:

If the segment mode is used, we first need to create a data table. The script is as follows:

The meanings of the fields in this table are as follows:

After configuration, start the project and access http://localhost:8080/api/segment/get/leaf -Segment test path (leaf segment test at the end of the path is the business tag), you can get the ID.

The monitoring page of segment mode can be accessed through the following address http://localhost:8080/cache .

Advantages and disadvantages of section mode:

The SNOWFLAKE mode needs to work with Zookeeper, but the dependency of SNOWFLAKE on Zookeeper is weak. After starting Zookeeper, we can configure Zookeeper information in SNOWFLAKE, as follows:

Then restart the project. After successful startup, you can access the ID through the following address:

This is mainly implemented by using the incrby of Redis. I don't think there's anything to say about this.

zookeeper can also do it, but it's troublesome. It's not recommended.

To sum up, if MyCat happens to be used in the project, MyCat+Zookeeper can be used. Otherwise, LEAF is recommended. Both modes can be used.