1, Miscellaneous words
As a programming enthusiast, you may not be too optimistic about the standard static desktop. You may be amazed at the effect of WallpaperEngine. You may also want to make a personalized desktop beautification program. First, you should start with dynamic wallpaper. It was originally studied from the existing program, but the effect was not ideal, because I still didn't understand how to set the dynamic wallpaper through the code (as you can see, I grabbed the dynamic wallpaper program of KuGou cool dog music. I felt that this was the standard template, but it had a flaw: there was no sound. The program can be in Here (extraction code: 6cth) So I saw the articles of several bloggers Principles of Windows dynamic desktop,<Write Windows dynamic wallpaper (about Windows 10 desktop) (I) >, benefit a lot. 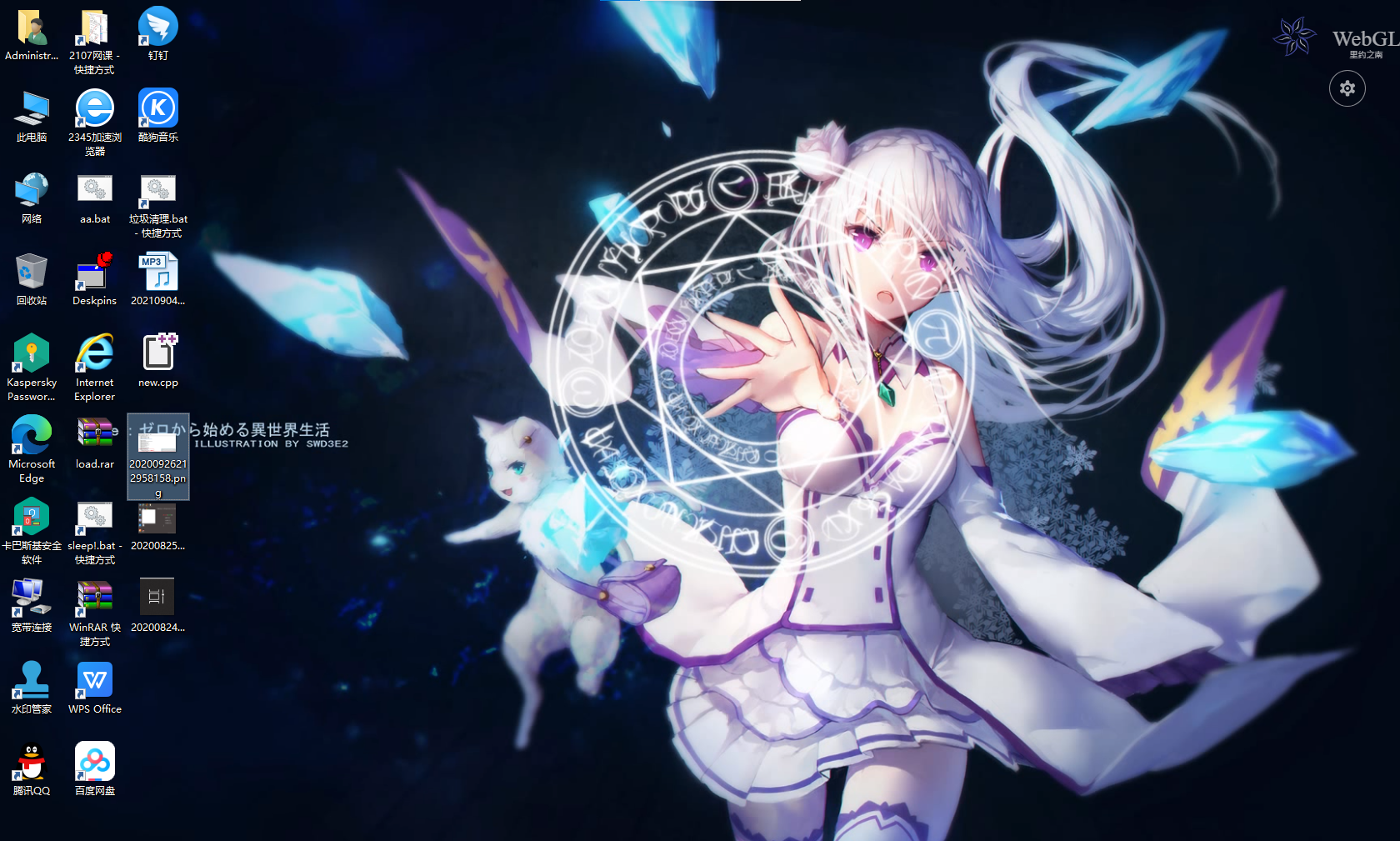 As for why I want to write this article, this is because the author mentioned the problem of code in both articles: after the task window pops up, the wallpaper program window highlights (forced rendering after the parent window relationship changes), and I network information (qq_40036189) has replied to a solution. Although this solution is not perfect, I hope more scholars can see it and make some suggestions.

As for SysListView32, this window controls the list of desktop icons. If you want to add the desktop sorting function, you may need to use it.

As mentioned at the beginning, as long as you open the task window, SysListView32 and shelldll will appear_ The defview window is separated from the Progman window and produces an independent WorkerW space. The reason is that the system sends a group of messages to Progman, which causes it to abandon the original relationship state. This is the additional Buff effect of WorkerW smooth transition processing.

In fact, this way, we can still use the features of win10 desktop to achieve our goal. But it will have an impact (if you don't do anything in the original way).

About WorkerW, I also observed it in the Explorer window (file explorer), so there are usually multiple, depending on how many folders you open. We should pay attention to the total WorkerW of the desktop (let's call it so).

3, Write code
Progman displays wallpaper. We just need to put our own window in front of it, that is, set our own window as a child window of progman. Note that the WorkerW window without child window is hidden. It is responsible for smooth transition, that is, it is drawn in front of progman. We must hide it in order to display our window normally.
So an early generation of code appeared:

It seems that we have successfully inserted our sub window: 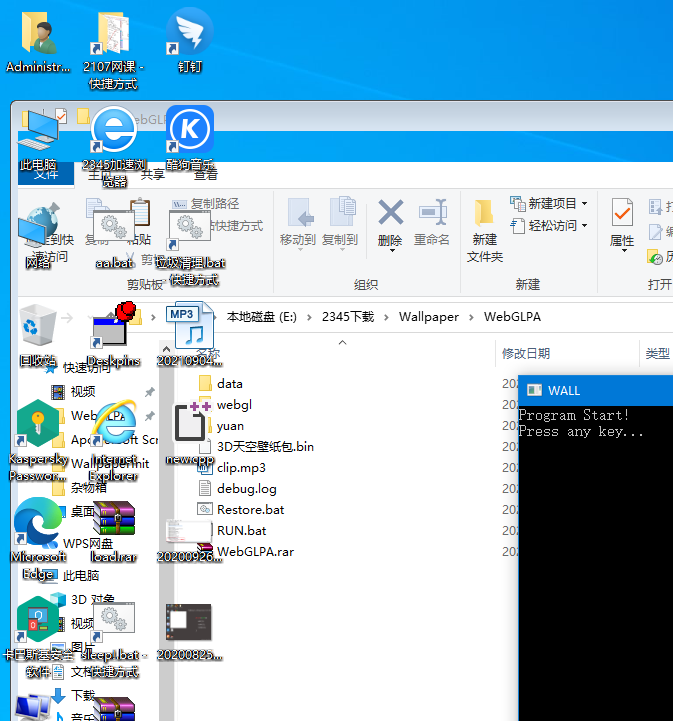 However, as soon as you open the task window: press the key combination "Win logo"+   Tab ", or press this button on the taskbar 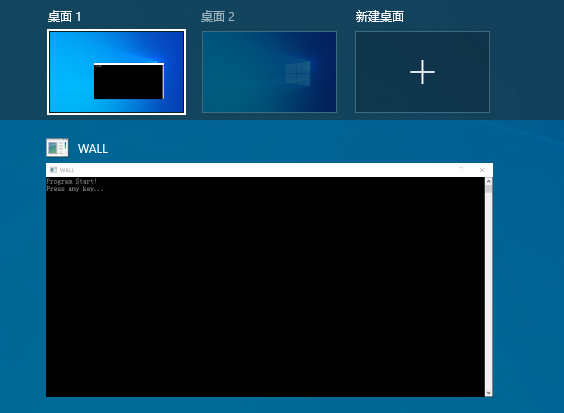 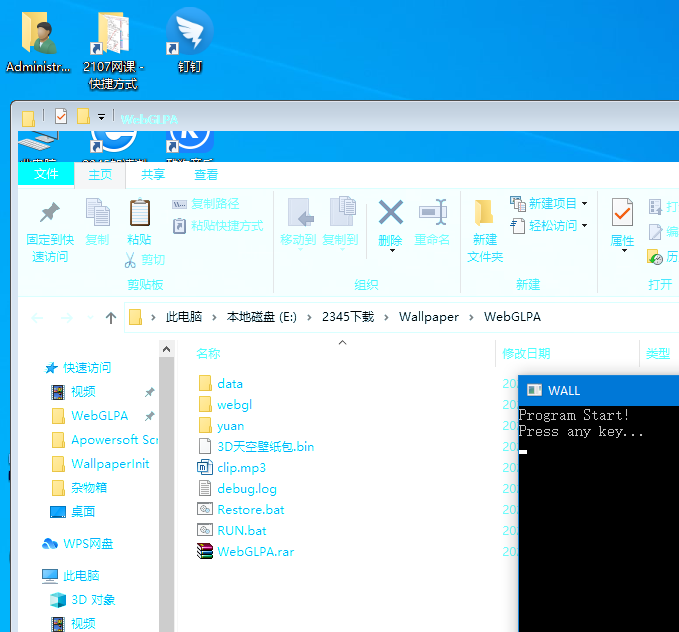 Once we close the window and return to the desktop again, we will find that the wallpaper window (I use a folder instead) is highlighted, and there will be problems with the rendering of the form: the form control will display the desktop background or something. This shows that our window is no longer a child window of Progman, but should now be shelldll_ The sub window of defview and above SysListView32, we were forced to get the special effect of desktop background preview (why do I want this). 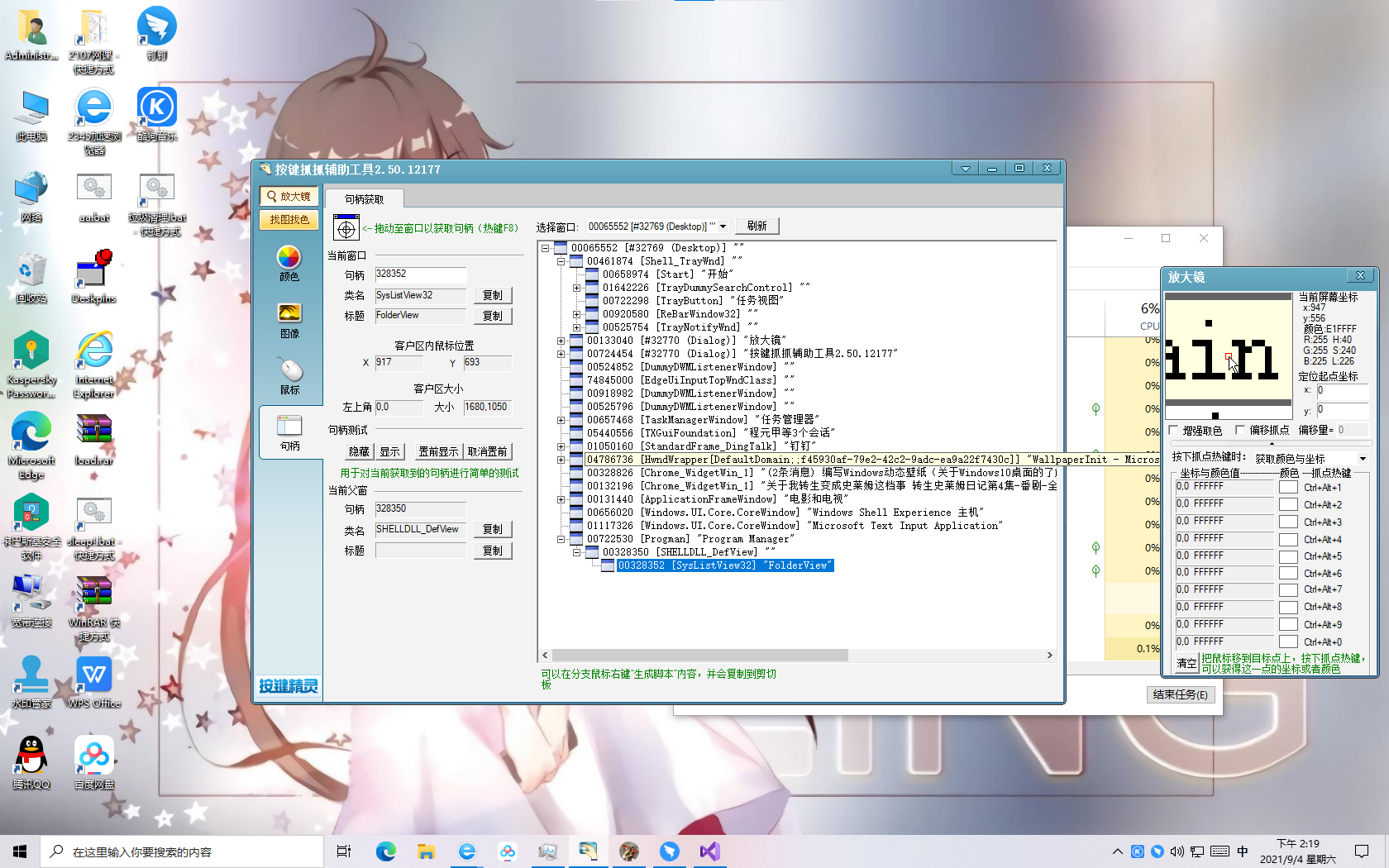 Figure 1. Before opening the task window 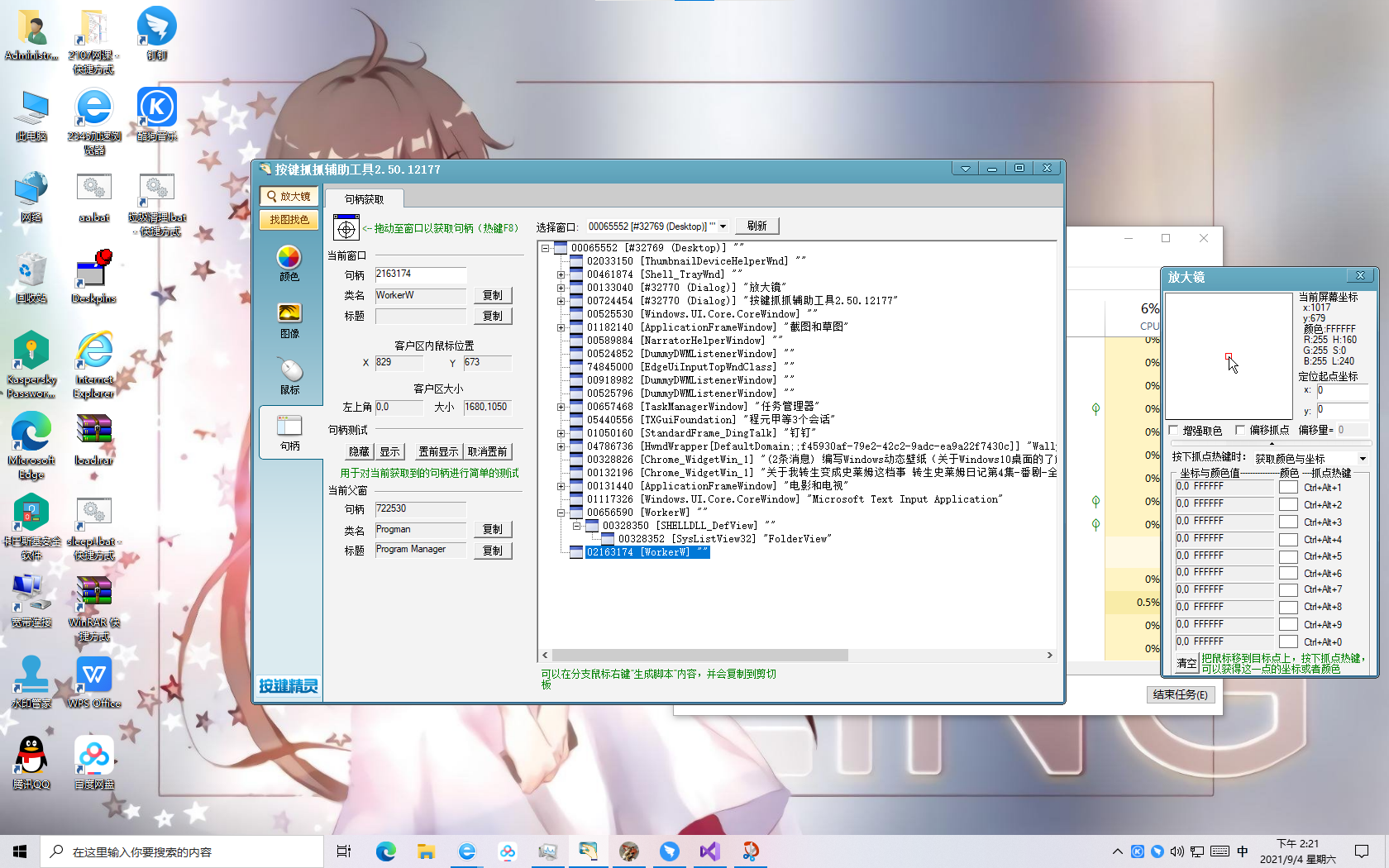 Figure 2. After the task window is opened

We observed that a series of wonderful changes will occur when activating the task window. For example, all sub windows under Progman follow SHELLDLL_DefView as the new parent window (I tried it manually with SetParent. As long as the parent window is set to it, the rendering of the child window will be wrong, and the preview of the original static wallpaper window will be displayed locally, which has the same effect as the magic event); The Progman window is separated separately, and this adjustment is not restored after closing the task window.

It turned out that our originator was in the father son relationship with Progman. So I thought of setting the wallpaper program window as Progman's parent window (this is generally not recommended, because as long as the wallpaper program terminates unexpectedly or the wallpaper window is destroyed, the icon on the desktop will disappear unless the shell Explorer is restarted or the icon window is reset), because the system will not quarrel with Progman's parent window (this is the case), I call this operation Progman reverse parenting. 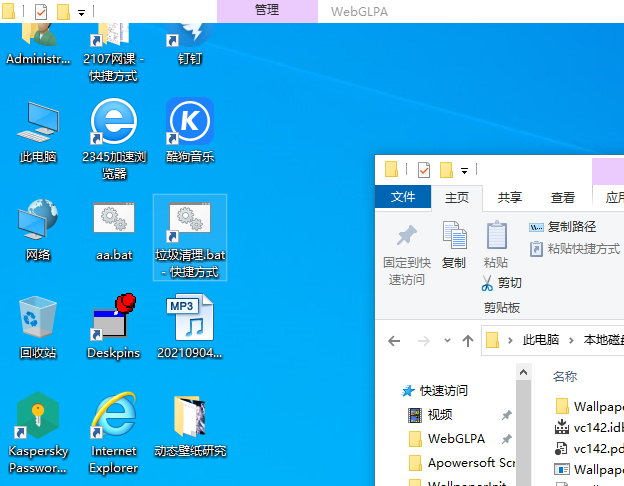 And this method can ensure that our wallpaper window will not lose focus, so after adjustment, both windows can receive mouse and keyboard messages without tedious processing of Hook global messages. 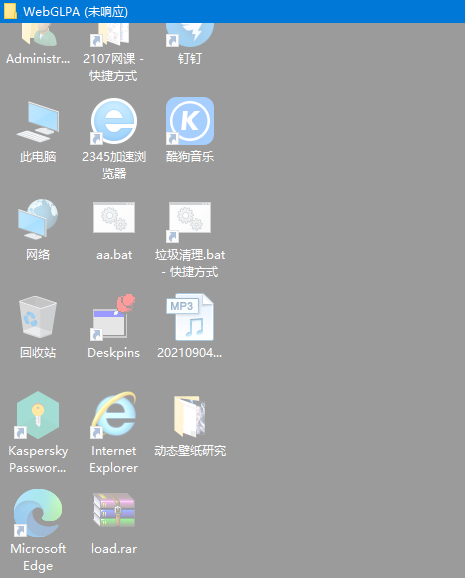 Although reverse parent partially solves the problem of independent windows, the icon window will be blocked, and there are problems in message processing. Therefore, there will be no response.

However, this operation will not solve the visualization problem of wallpaper. The original blogger has mentioned that SysListView32 will cover our window, because the default icon list is full screen on the desktop, and its window background will reflect the original static wallpaper window.

So, how should we solve it? Very simple, just use the algorithm to calculate the number of icons and the size of a single icon, and then calculate its actual area. Finally, we use   GetWindowRect and MoveWindow can reset the size of the list window.

The effect is shown in the figure: 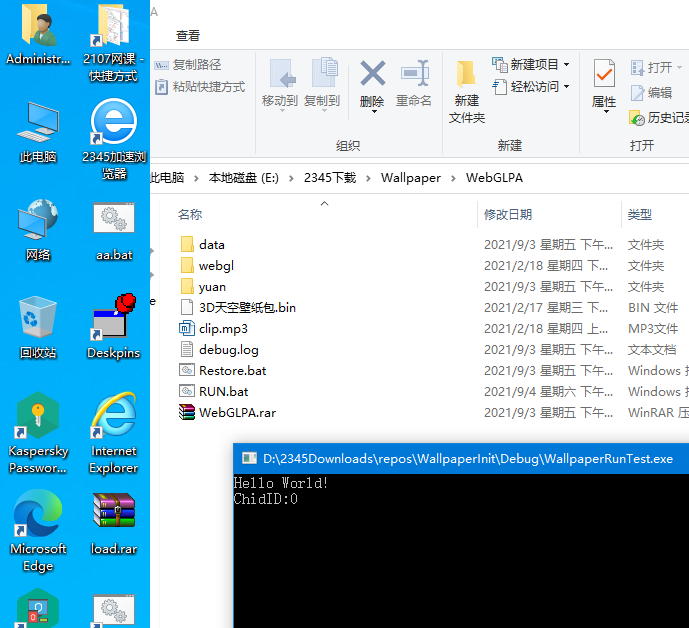 Please look at the picture carefully.

The fact is not so simple * (we can see that the form of the icon list still displays the desktop shading image, and we can't see the later part). During the test, we found that the SysListView32 window has a black background. Under normal circumstances, the desktop image will also be displayed. As long as we minimize the [neither minimize nor hide, as will be mentioned later] Progman window, It will become a box with white words and black background. So a function SetLayeredWindowAttributes without complete documentation comes in handy.

I checked the prototype and usage of this function as follows:

Note: to make the form transparent, you must first have WS_EX_LAYERED extension attribute (this attribute was not defined in the old SDK, so it can be directly specified as 0x80000).

Debug again, and the effect is outstanding (the translucent color depends on the desktop background): 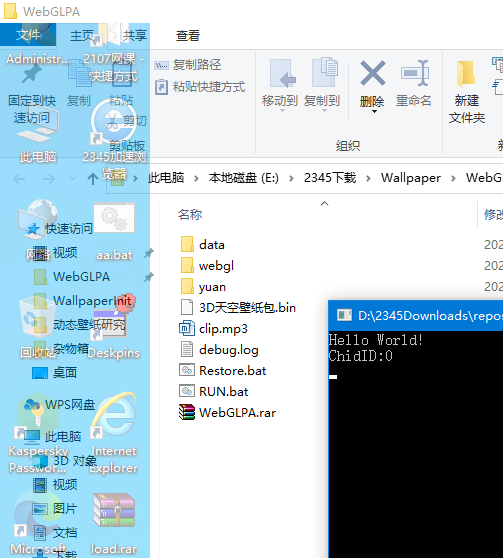 When the article is written here, you may already think it is safe. However, things are by no means so simple.

Similarly, I found that once the task window is opened, the Explorer will not respond. Why is it so similar?

Our readers should still remember that I set Progman as the reverse parent before, that is, now the Progman window has become a child window. Our system will not find this window. This window disappears from the window list because it is directly SetParent as a child window (in fact, it is still there), so the system cannot find it, so the message sent cannot be processed, resulting in no response from the resource manager.

I saw a prompt about SetParent on MSDocs, which may be related to the error of form relationship setting:

For compatibility reasons, SetParent does not modify the WS of a window whose parent is being changed_ Child or WS_ Pop window style. Therefore, if hWndNewParent is NULL, you should also clear WS after calling SetParent_ Child bit and set WS_ Pop style. Conversely, if hWndNewParent is not NULL and the window was previously a child window of the desktop, WS should be cleared before calling SetParent_ Pop style and set WS_CHILD style.

When you change the parent of a window, you should synchronize the UISTATE of the two windows. For more information, see WM_CHANGEUISTATE and WM_UPDATEUISTATE.

If hWndNewParent and hWndChild are running in different DPI aware modes, unexpected behavior or errors may occur. The following table summarizes this behavior:

Moreover, Microsoft does not recommend setting the parent-child relationship between the windows of two different programs. Of course, I haven't experimented with this method yet. I adopted another method:

That is to forge a normal looking Progman window to process these messages. Since the incidental effect of the smooth transition of the previous task window is not very useful, at least the processing for Progman is invalid (it can not be processed), it is simple to directly receive the message and end it without doing anything? At first, I tried with the mentality of trying, but I didn't expect to succeed.

I create an independent Windows window in the console. Of course, the length and width of this window is not a big problem at all. You can set it to 0. However, the class name and title are very important and must be equal to the original Progman. You can know it through Spy + + and other tools. Class name: Progman; Title: Program Manager.

The method of making the initial Progman invisible mentioned earlier is similar to this. I set it as a window with length and width of 1 (minimization). Why not use ShowWindow (hWnd, SW)_ Hide) because you have to set its parent-child relationship later. After SW, it will be invalid.

At present, the complete code is as follows (in a hurry, relatively rough, don't read):

The running wallpaper startup program retrieves the player handle through the window title. The name used in the test is WebGLPA. The player needs to be full screen and borderless. After startup, manually open the task window once (trigger that event because I don't know what message he sent), and then the display and most operations will return to normal.

This is just a simple modification, and there are many things to deal with later:

1. The player cannot have an icon on the taskbar. For their own programs, this is easy to modify directly in the window;

2. In the example, the modification of icon bar width is static, which can be dynamically modified by calculating the number and size of icons;

3. The correct sub window list is not listed in the example, which can be improved by itself;

5. This; The dynamic wallpaper shown in the example is only displayed in the current desktop view, and other views using Win10's multi desktop mode (virtual desktop) cannot be synchronized.

Let's write so much. If I have time, I may come to further modify it. Then the rest of the work will be handed over to all immortals!