Epoch: The voting cycle is used to distinguish each round, and each time a new leader-follower relationship is established, there will be a unique epoch value to identify. It is as if the emperor had to have a year number to distinguish him from the emperors before or after him. Start just by reading saved currentEpoch and acceptedEpoch values from the file. The default is - 1.

Zxid: Transaction ID, which represents the serial number of Zookeeper's current write operation, ensures that the write operation is executed sequentially. One scenario is that when Follower's maximum zxid is greater than Leader's zxid, Leader sends TRUNC packages to Follower to truncate redundant transactions to ensure consistency with Leader data. Zxid is initialized in the loadDataBase method of ZxDataBase. Each time a write transaction zxid is executed, it adds 1, defaulting to 0.

Messenger is used to exchange election information between clusters. Quorum Cnx Manager is used at the bottom of Messenger to manage the Socket data transfer between the local machine and other machines in the cluster. The communication flow chart is shown below. 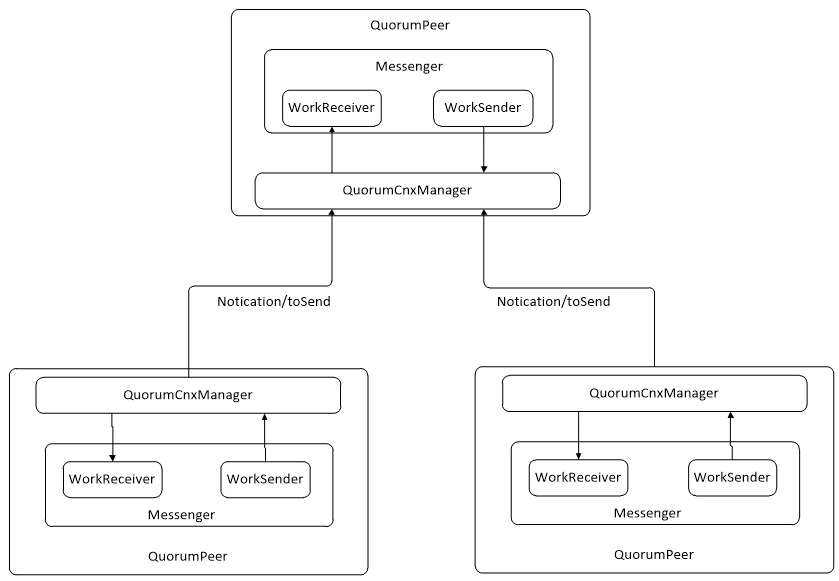 All LOOKING machines in the cluster start the election process at the same time. At the end of the election, a Leader and multiple Follower are generated. Then each Follower connects to Leader for transaction initialization and data synchronization.

Observer does not participate in the election, but receives Leader's information synchronization requirements.

QuorumPeer will set the initial state to LOOKING when it starts, then start the FastLeader Election election process, first send itself as a Vote group to other QuorumPeer, and the data structure of the group is Notification. At the same time, start the sending and receiving thread of Messenage and call the lookForLeader method to initiate a round of electing the Leader.

The default election rules stipulate that when more than half of QuorumPeers agree with the same Leader, the election process ends and each QuorumPeer sets itself as Leader, Follower or Observer. Of course, interested readers can also try to create their own election rules class, as long as the implementation of Quorum Verifier.

1. Each QuorumPeer knows the ip addresses of other QuorumPeers and the total number of QuorumPeers.

2. Each QuorumPeer initially initiates a vote and chooses itself as leader. Send vote notification s to all other QuorumPeers and wait for a reply.

The provisional Leader generated during the election process becomes Vote, and the Vote generated in the last round after the election is the new Leader.

QuorumPeer calls the lookForLeader method for each election initiation. First, it sets itself to LOOKING state. This method is the main method of FastLeaderElection class. The specific flow is as follows:

The lookForLeader code is long, so let's first look at its body structure.

Specific analysis is as follows:

First, through the sendNotification method, I tell the cluster that I am looking for a Leader. Other machines in the cluster will receive Notification in the Messenger process, and then they will reply who should be the current Leader.

A. The sender replying to Notification is also in LOOKING status

If the sender responding to Notification is also in LOOKING status, it does not know who the final leader is. At this time, FastLeader Election is compared with the sender to see whose potential leader has the largest Epoch and zxid, and whose largest is the current candidate leader. Then broadcast the candidate leader to the sender. Can change their follow-up Leader. At the same time, we can judge whether our collection of Nootifications can reach more than half of the conditions to determine the final Leader. If we can decide, we can set the final Leader and withdraw from the election process.

The total OrderPredicate method is used to determine whether the Vote sent by the other party is an updated Reader candidate, and if so, to update the local proposed Leader. The main code is as follows:

termPredicate is used to determine whether the selected Leader condition is satisfied. The implementation of Quorum Verifier interface sets up the Leader and exits the FastLeader Election process if it is satisfied. The main code is as follows:

B. The sender replying to Notification is also Leader or Follower

If the sender replying to Notification is Leader or Follower, the process is relatively simple. The Notification message is saved in recvset and the termPredicate method is called to determine whether the Leader can be determined and the election process can be terminated.