Since its debut in 2015, after years of development, fluent has become quite mature and has been widely used in Internet companies such as Alibaba, meituan and pinduoduo. In the ICBU Ali seller, 90 +% of the new businesses are developed with Flutter, and the ICBU client development group has a large number of Flutter developers.

The early trial version of fluent for web (FFW) was released in 2019. At that time, many interested students had conducted research on it. At that time, due to many problems just released, it was not suitable for use in the production environment. In March this year (2021), Flutter 2.0 was released and FFW officially entered the stable branch.

Due to the lack of front-end students' support, the students on the App side can only invest in completing this page. After some consideration, we chose FFW for the following reasons:

After the above thinking, the FFW pit filling trip was officially started.

At present, the relevant pages of Alibaba seller FFW have been online. Since the release of FFW, the problem of large product js files has always existed, which will affect the page loading experience in theory. In the actual test, it is observed that the loading experience on PC and mobile devices is fair and runs smoothly. The relevant demos are as follows:

Creating an FFW project is relatively simple. Switch to the stable version of fluent, and then run the command fluent create xxxproject. After entering the project, click Run a Demo project to run it. To apply FFW to practical projects, we need to consider the problems of the project and how to integrate into Alibaba's system, such as how to publish, how to control the development process, how to request interfaces, etc. it is summarized as follows: 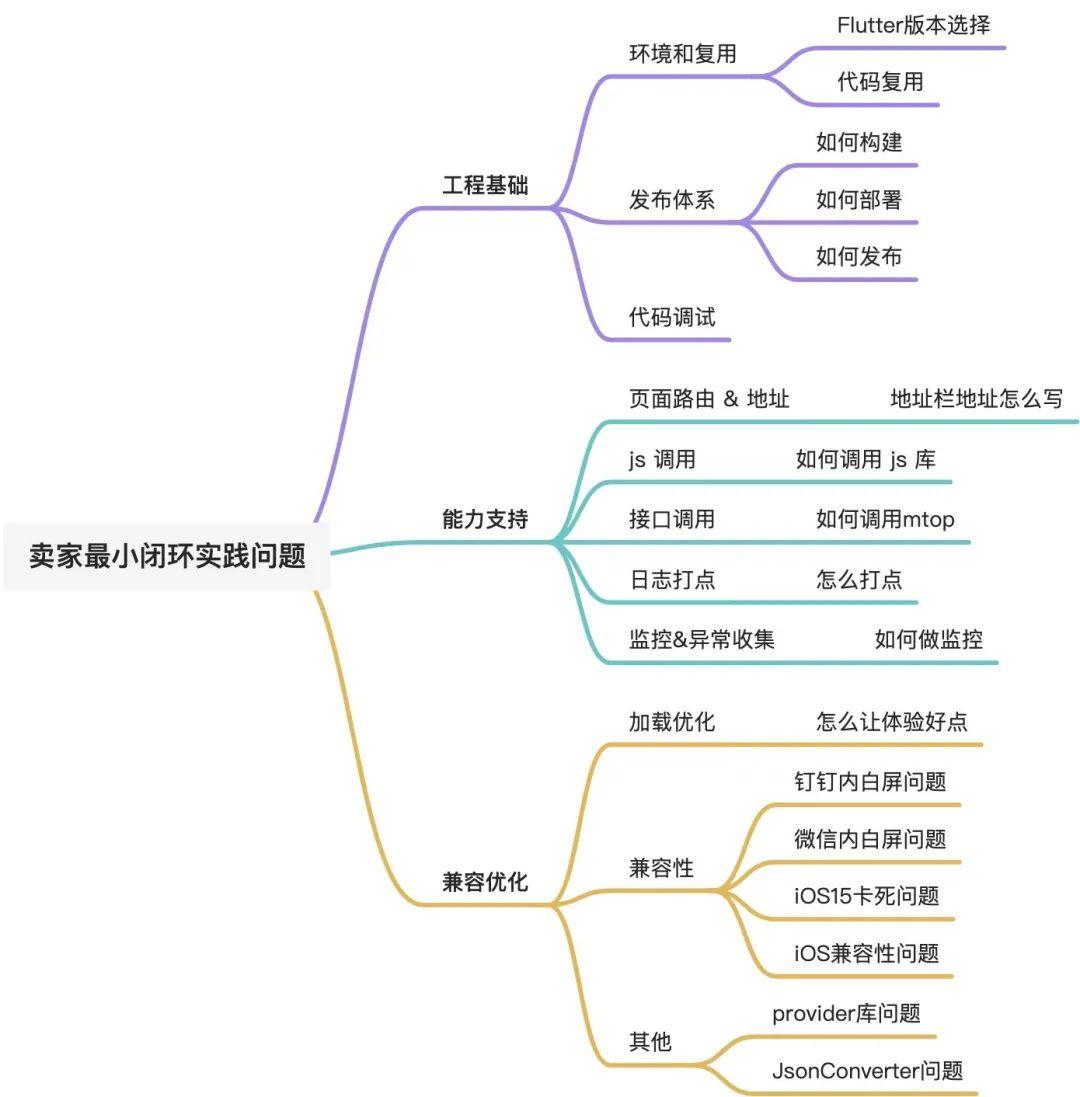 The above are the problems encountered in the practice of open source drainage and minimum closed loop of FFW by Alibaba sellers. In addition, the problems to be built by FFW include: 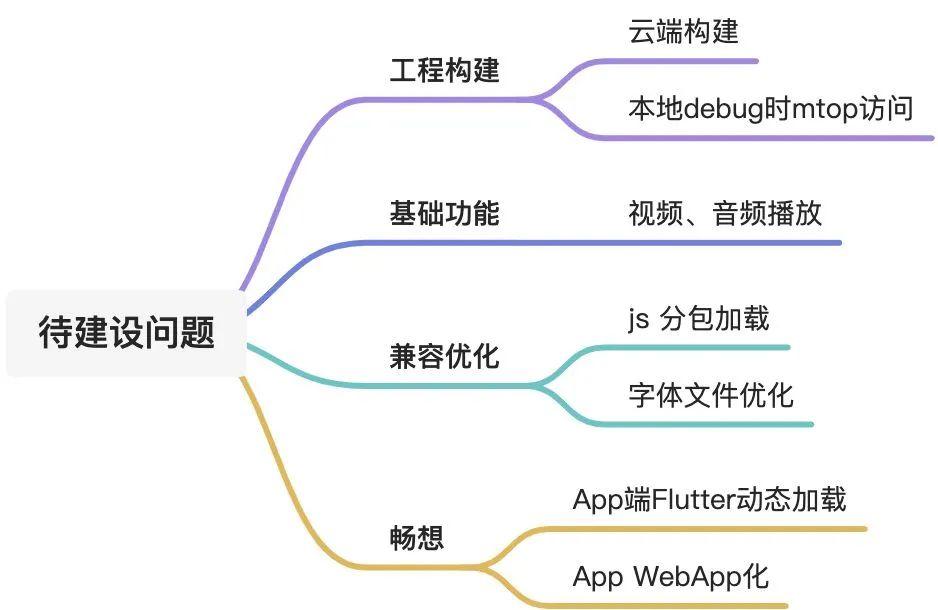 Next is the explanation of the causes and solutions of engineering basic problems in the minimum closed-loop practice.

Referring to the development of Flutter on the App side, FFW should first consider what version of Flutter to choose, and then consider how to reuse the existing Flutter code.

The reason why FFW does not choose the stable version is that the FFW page will get stuck due to webGL problems on the recently released iOS 15. The problem repair scheme has been integrated into the candidate version. (the latest stable version is 2.10.0, and the problem has been solved)

The problems to be considered in reusing FFA code into FFW are divided into two parts:

FFW requires dart version 2.0 + corresponding to dart version 2.12. This version of dart introduces the feature of sound null safety. The version of Flutter used on FFA is 1+ The dart corresponding to the version has not introduced empty security. At the same time, dart library codes of new and old versions in fluent cannot be mixed compiled, so the existing App side code library cannot be reused seamlessly at present. It can only be reused by modifying the existing code. The main points of code modification are as follows:

After these three steps of modification, the low version code can basically be compiled in the new version. In addition, some API s will be changed due to version upgrade and need to be modified accordingly, such as:

In API changes, such problems account for the majority, and it is easy to modify. In addition, there is another kind of change. For example, in the abstract class TextSelectionControls, the number of method parameters such as handleCut has changed:

Such changes need to be modified according to the actual situation, and the difficulty is medium. The probability of newly added parameters can not be used.

After the local Demo project is created and run successfully, the following issues should be considered:

For the management and control of the development to release process, refer to the DEF platform (Alibaba's internal front-end development and release platform) selected by the front-end and managed by creating WebApp, which will not be described in detail here. The contents involved in page publishing are as follows:

There are two ways to build FFW. Not all products need to be simplified in application; In addition, to release products on the DEF platform, some additional processing needs to be carried out on the products. How to build is mainly considered in the construction. The optional commands for FFW compilation and construction are as follows:

The summary is as follows:

We choose the following two ways to load resources based on the performance of the html page and the empty page.

For the newly created project, the compiled product is located in/ Under the build/web directory, the structure is:

The functions and descriptions of each directory and file are as follows:

In the actual release, the only required build product is index HTML and main dart. JS, for each iteration, only main is needed when the "shell Engineering" change is not involved dart. JS.

After the required products are selected, the two files need to be processed before the DEF platform is released:

On the DEF platform, js and html files will be published to the corresponding cdn after the product files are processed, and html will be deployed to a specific address:

For online environment, index The HTML content is as follows:

At this point, we can access our target page by using the page deployment address. If the page is opened at one time and there is no need to jump multiple pages internally, the publishing work is completed at this step. If multi page Jump is involved, you also need to publish relevant contents to your own domain name. A simpler way is to configure redirection. In addition, you can also directly reference products: 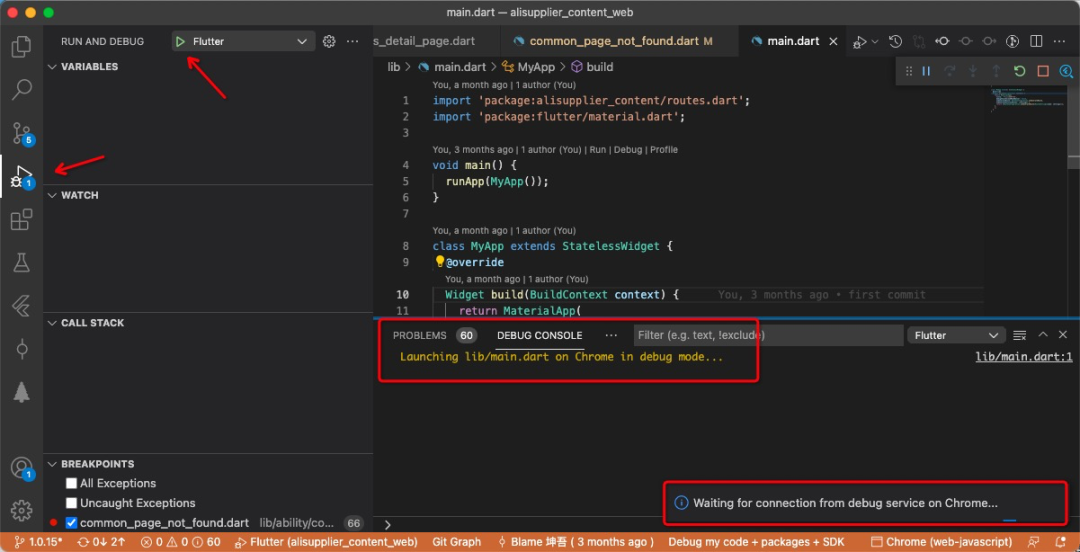 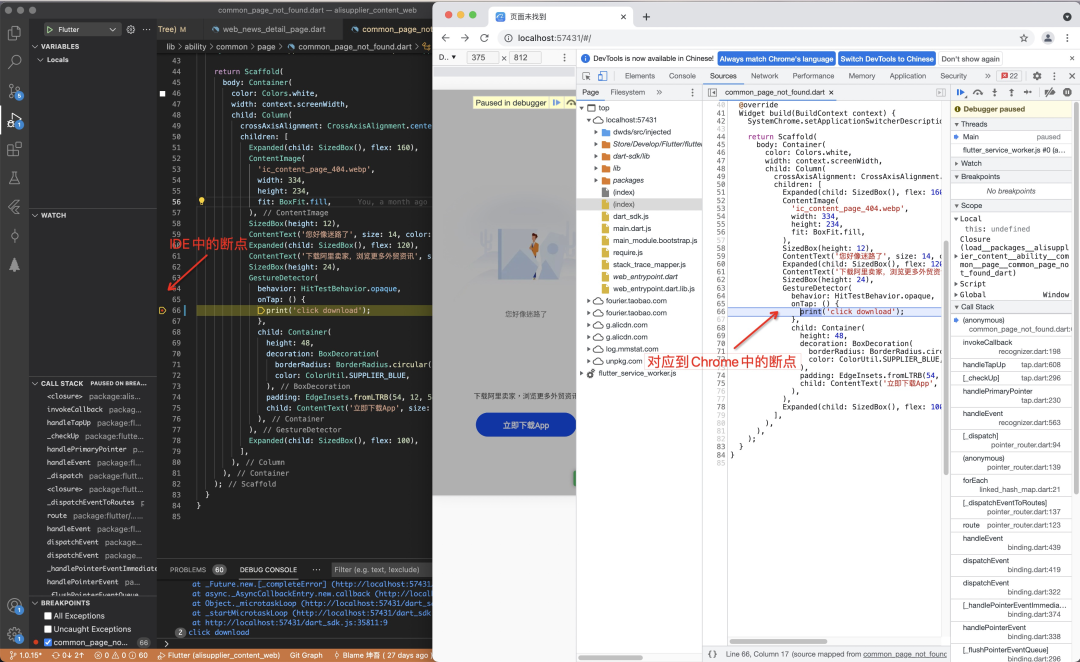 Breakpoints visible in VSCode and Chrome

After entering the actual development, we need the support of capabilities such as routing and interface request. The first is page routing and address.

When multiple pages appear in FFW applications or parameters need to be transmitted through Http links, corresponding routing configuration is required. Similar to FFA, you can configure the corresponding Route in the root MaterialApp and then use navigator Push jump or directly open the page through the page address. The following code can realize name jump and page address jump:

After the configuration is completed, you can jump on the page, or directly jump through the Champions League browser address:

Note: the above address jump mode requires that the UrlStrategy of FFW is hash tag mode (the default UrlStrategy).

By using pub Dev and other warehouses can easily use various capabilities in FFW. For the capabilities that are not available in the warehouse, it is necessary to consider extending them. The ability of native can be used through plug-ins on FFA, and the ability of js can be extended on FFW. Through the ability of calling js, a large amount of technology accumulation at the front end can be applied to FFW.

Dart in FFW will eventually be compiled into js, which should be used naturally in FFW. In order to support js's call in dart, dart official released the js library. By using annotations in the library, it is convenient to call js in dart.

For example, when the alert method needs to be called, the following definitions are made:

Then introduce JS where alert is needed_ interface. Dart and call jsAlert method:

For more usage, see pub Description of js Library in dev: https://pub.dev/packages/js . Got through After the ability of js, many problems will be solved.

In view of the construction of the existing App Mtop (a gateway used by Ali App), it can reduce a lot of work if the existing Mtop can be invoked in FFW. To do this, you need to add the ability of MTop call to FFW. To complete this work, you need two parts:

By calling mtop JS can introduce the ability of mtop into FFW. The overall process is as follows:

4. Parsing result: the result returned by the interface request is a jsObject, which can be json through the js method After stringify is converted to json, it is used at the dart level

Access mtop.com in FFW JS, the target MTop interface needs to be processed accordingly before calling:

As requested by mtop, the js Library of golden arrow can be introduced into FFW for management. The process is as follows:

Then, configure the corresponding points on the log platform.

The access of monitoring capability is relatively simple. Here, select arms (application real-time monitoring service) and directly in index Just introduce arms into HTML. The process is as follows:

2. Configure on the arms platform

After completing the above basic capacity-building, FFW can basically meet the development of simple needs. Besides requirements development, experience, compatibility and other issues need to be considered.

One problem with FFW since its release is the package size. For an empty helloworld project, the size of a single js package is 1.2 MB (before uncompressed). It may take several seconds to load when the network on the mobile device is bad. In order to improve the experience of page loading, consider the following things:

The optimization of waiting process can improve the waiting experience to a certain extent. If you want to load fast, you have to make the loaded resources small. For multi page applications, you can use the whole main dart. JS is divided into several small packages and loaded gradually in the process of use. At present, it is understood that meituan has corresponding technology, but the implementation details are unknown and need to be studied. Can refer to https://github.com/flutter/flutter/issues/46589

In addition to the compatibility problem of H5 container, some problems of FFW itself are encountered in practice. The records are as follows:

At present, only a small closed-loop construction available for business has been completed in practice, and there are still many contents of TODO in FFW, as follows: