How to ensure that a class has only one instance and that the instance is easy to access? Defining a global variable ensures that objects can be accessed at any time, but it does not prevent us from instantiating multiple objects. A better solution is to have the class itself responsible for keeping its only instance. This class can ensure that no other instance is created, and it can provide a method to access the instance. This is the motivation of the singleton model.

? let's take a look at its implementation, because the singleton mode is the most important design mode. Let's talk about it carefully here:

The key is to make the constructor private, and restrict the access to an instance only through internal static methods.

But this way of writing is obviously not thread safe. If more than one thread calls the getinstance method before the class is initialized, and the lazySingleton == null condition is correct, multiple LazySingleton instances will be generated in new. It can be changed as follows:

This is called DoubleCheck. When multiple threads enter the if(lazySingleton == null) code block before class initialization

At this time, add lock control and judge if(lazySingleton == null) again. If the condition is true, an instance will come out from new. When it's the turn of other threads to judge, it will naturally be false. The problem is roughly solved.

But even so, some problems of the above code improvement cannot be solved.

Because there will be reordering problems. Reordering is a compilation optimization technology, which belongs to the content of compilation principles. We will not discuss it in detail here, but we will tell you what's going on.

The execution is as follows:
1. Allocate memory to this object
2. Initialization object
3. Set LazyDoubleCheckSingleton to point to the newly allocated memory address.

But after compiling and optimizing, it may be like this
1. Allocate memory to this object
3. Set LazyDoubleCheckSingleton to point to the newly allocated memory address.
2. Initialization object

Once step 2 and step 3 are reversed, something goes wrong. (precondition: compiler optimizes)
For example, there are two threads named thread 1 and thread 2. Thread 1 enters the if(lazySingleton == null) code block, obtains the lock, and executes new LazyDoubleCheckSingleton(). When loading the instance of the construction class, set LazyDoubleCheckSingleton to point to the newly allocated memory address, but the object has not been initialized. Thread 2 determines that if(lazySingleton == null) is false, and returns lazySingleton directly, and uses it again. When using it, there will be a problem.

The reordering is as follows: 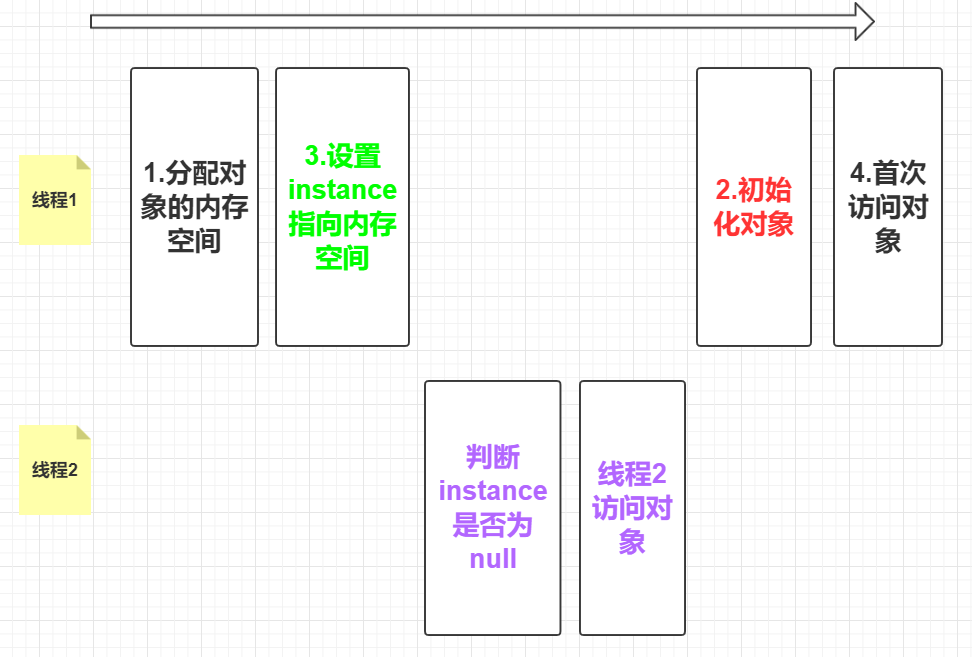 Of course, this is a good improvement. To disable reordering, add a volatile. If you are not familiar with thread safety, please refer to this article Detailed explanation of thread safety in Java Concurrent Programming

There are more than one method. You can also use the visibility of object initialization to solve this problem. Specifically, you can use the static internal class to delay loading based on class initialization. The name is very long, but it is not difficult to understand. (with this method, you don't need to worry about the problems caused by the above compilation and optimization.)

The delayed loading of class initialization is closely related to the JVM. In our example, the class is only loaded, but not linked or initialized.

Let's take a look at the implementation plan:
Define a static inner class whose static fields instantiate a singleton. To get a single instance, you need to call the getInstance method to get it indirectly.

If you are not familiar with inner classes, you can refer to this article [Java core technology volume] in depth understanding of Java internal classes

Here's the lazy introduction. Let's take a look at the implementation of another singleton mode

Show me the basic way

In the same way, there are problems in the above starved Han style writing

Let's take a look at one by one:

To ensure that the starved Chinese can be serialized, you need to inherit the Serializable interface.

The results show that the objects are different, and the underlying cause of serialization is involved. Let's look at the solution first:

Add the following code to the starved Chinese code

Re run, the result at this time:

The reason lies in the readResolve method. Next, go to the ObjectInputStream source code section to find the reason. (it's all about bottom level implementation, don't expect to understand)

There is a description on a method of reading the underlying data
It is possible that there is a readResolve method defined in the serialized Object class. We see the judgment in the binary data reading method

This code is in the private Object readOrdinaryObject() method. If there is a ReadResolve method, call it. Does not exist, does not call. If you think of the code we added in starving Chinese style, you can roughly guess what happened. 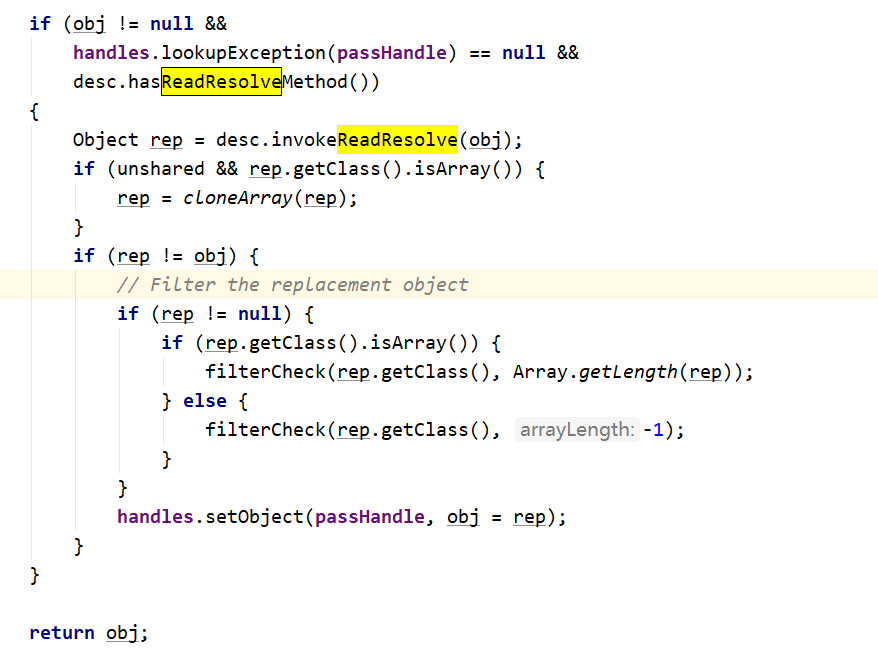 Another case is the single case of reflection attack damage

Here, we break the permission of private construction method so that a single instance can be generated by new. This is not what we want to see.

The solution is to throw an exception in the constructor

Run it again at this time

In fact, for lazy type, there is also a single case of reflection violation, which can be solved by similar methods of throwing exceptions.

? the singleton mode can be used in the following cases: