After several years of development, the concept of cache should be familiar. Common cache components include redis, mongodb and memcached. This article briefly introduces the common usage scenarios of redis and the use of basic APIs.
redis is a database based on key value pairs. Value can be String, hash, list, set, zset and other data structures. It can meet many application scenarios. It also provides additional functions such as key expiration, publish and subscribe, transaction, pipeline and so on.
characteristic:
1) the speed is fast, the data is stored in the memory, and the official reading and writing performance is 100000 / S, which is also related to the machine performance
a. Putting data in memory is the main reason for fast speed
b. C language implementation, close to the operating system
c. Single thread architecture is used to prevent possible competition problems caused by multithreading
2) data structure server of key value pair
3) rich functions: see the above functions
4) simple and stable: single thread
5) persistence: in case of power failure or machine failure, data may be lost and persisted to the hard disk
6) master slave replication: realize multiple redis copies of the same data
8) high availability and distributed: sentinel mechanism realizes high availability to ensure redis node fault discovery and automatic transfer
9) many client languages: Java PHP Python C + + nodejs

2. Installation and use of api

1.Redisdownload , I use redis-6.2 5 for this version, linux is recommended. After all, most of the time, our servers also use linux. 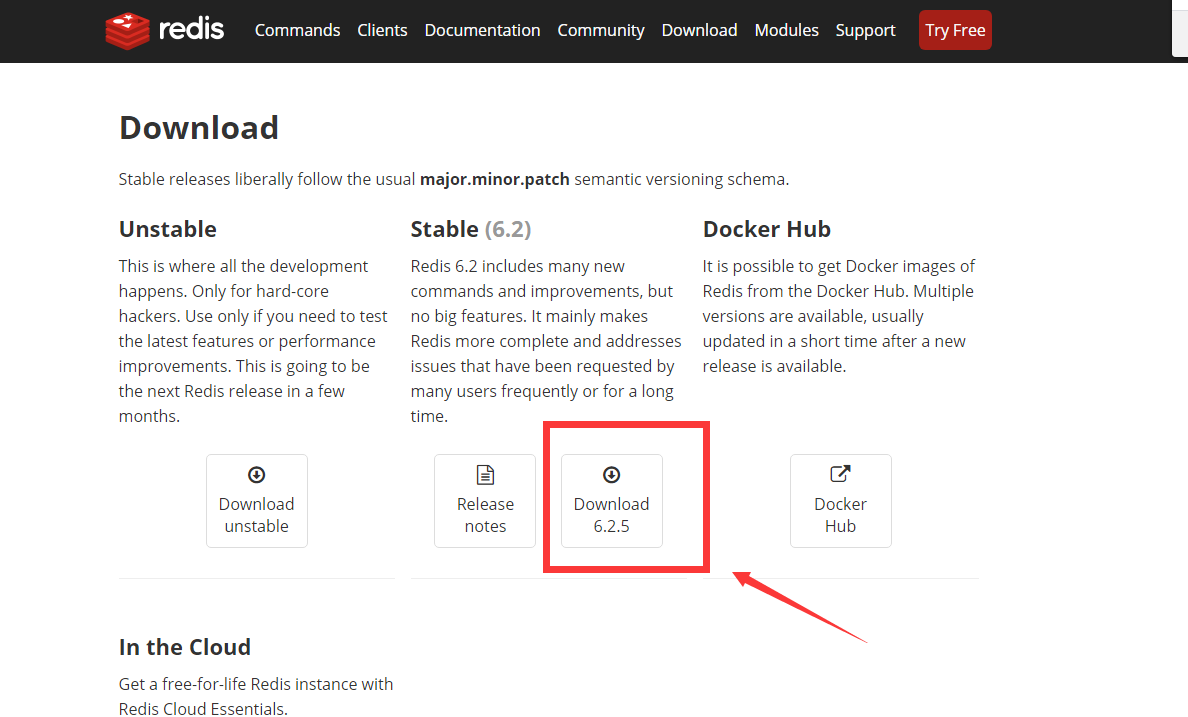 To forcibly compile redis using libc malloc, use the: make MALLOC=libc instruction
Then execute make prefix = / opt / redis-6.2 5 install
4. At this time, you can see an additional bin directory in the redis directory

Here, the installation of redis is basically completed.

After compilation, an additional redis.exe will appear in the redis directory The conf file is the configuration file. Here are some general configuration items

There are other configuration items, which will not be listed here. For detailed configuration, please refer to the official documents.

2.3 connect to redis using the client

//get gets the value of a key

//setnx when the key exists, insertion is not allowed; For some business data, use this command to prevent data from being overwritten; This function is similar to the temporary node of zookeeper and can be used to implement distributed locks. (Redisson is a complete distributed lock implementation scheme officially recommended by redis. Interested friends can take a look and study it by themselves.)

//mset inserts multiple strings at one time; When multiple inserts are involved, try to use this method to reduce the network overhead between the client and the server.

//Append string append, similar to the append() operation of StringBuffer

hash is actually a mapping table of string keys and values To put it bluntly, one key corresponds to multiple key values, which is particularly suitable for storing objects. Of course, we can also format objects into json strings and store strings directly.
hset stores a hash type of data

hget gets a property corresponding to a key value

hmget gets multiple properties of a key value in batch

You can see that I specifically used user: 1 as the key and set the name and age attributes. If we use mysql, it is similar to select name,age from user where id = 1. User represents the user table, and 1 represents the primary key. We use this mapping. Store MySQL data perfectly in redis. This storage method is simple and intuitive. Rational use can reduce memory consumption, The disadvantage is the need to control the encoding conversion (redis will convert all stored data into redisObejct objects, and there are 10 corresponding encoding methods according to the data type and size. The actual purpose is to improve memory utilization; anyway, the key value and value should not be too long. If they are too long, it is recommended to split them). If it is not controlled, hashtable will consume more memory; in addition to hash, there is another way to store directly Serialization is used to store objects. This method has high memory utilization. The disadvantage is that I only change a certain value of the object, and I also need to deserialize the whole object, and then serialize it to redis after the operation. Serialization and deserialization have some overhead. How to choose depends on the actual situation. If your resources need to be modified frequently, hash is recommended.

hdel Deletes one or more fields corresponding to a key value

There is a big difference between hash operation and string operation, but the attribute must be specified after the specified key, and the command must be preceded by an h. I won't introduce them one by one here.

It is used to store multiple ordered strings. A list can store up to the 32nd power of 2 - 1 elements. Because it is ordered, you can obtain elements or a list of elements in a range through the index subscript
rpush and lrange

From the above, we can see that the insertion order is Id1, Id2 and ID3, but the order of lrange is different. This is because this is actually a two-way linked list, one is inserted from left to right (lpush) and the other is inserted from right to left (rpush). Therefore, the order of results from lrange is reversed, because we read (lgange) from left to right
If you don't understand, let's look at the following example. Just now we rpush and lpush an order list element, both of which are Id1, Id2 and ID3. Now I insert an element into it

Because the order of lpush and rpush is reverse, we add a new element before the same element, and the order is still reverse;
lpop pops an element from the left

rpop pops an element from the right

A message queue can be implemented using rpush and lpop. (however, redis is not recommended as a message queue. After all, we only use it as a cache, and the message should be handed over to mq). There are other commands for list type data operations, such as lidnex to view the elements of the specified subscript, len to view the length of the list or the length of an element in the list, lset to modify the elements in the list, and lrem to delete the specified number of elements of the specified content in the list And so on.

Cannot duplicate the set set in java. redis is the same, and the set is unordered. In addition to supporting addition, deletion, modification and query, it also supports intersection, union and difference sets of sets. In social networking, recommendation and common hobbies, you can use the set set.
sadd new element

smember queries the elements in the set set. It can also be seen from the following query results that the set set is unordered

sismember determines whether an element exists in the collection

spop randomly pops up a specified number of elements. This thing can be used as a lottery function

sunion finds the union of two sets, or the user1 and user elements of the above two sets remain unchanged. There are only two elements in both sets. zhangsan has both sets. The union set is three elements.

sdiff finds the difference set of two sets; Or the above two sets, user and user1. Their difference sets are zhaoliu and wangwu respectively

Store get set operation, whether it is to get intersection, union or difference set. The store operation is to regenerate the extracted collection into another collection. The corresponding commands are sinterstore, sunionstore and sdiffstore

zset is an ordered set, which is actually sorted by a score. Using zset, you can realize a function of like ranking. The following simulates the implementation of a like counting operation.
zadd adds a zset set. The following operations can be understood as recording the likes of 20180808 users.

Zincrby adds a specified score to an element; To put it bluntly, every praise is zincrby

zscore obtains the score of an element in the collection, that is, the number of likes of a user.

The above describes the different data types and related api operations of redis. The following describes our common redis functions.

Expierat sets the fixed expiration time of a key. The parameter is time stamp. Through this, the function of collecting vouchers within a limited time can be realized

This article mainly introduces the installation and startup of redis, some configuration items and the use of main APIs. There are many functions of redis, such as persistence, master-slave replication, sentinel mechanism to achieve high availability, and ensure the failure and automatic transfer of redis nodes. The Java api of redis is not introduced here. In fact, it is no different from using redis cli. To put it bluntly, it just encapsulates the above commands into methods. That's all for the introduction of this article. Later, we will introduce some other redis functions and specific application scenarios in detail.