1 Retinex
1.1 theory
Retinex theory began with a series of contributions made by land and McCann in the 1960s. Its basic idea is that the color and brightness of a point perceived by human beings are not only determined by the absolute light entering the human eye, but also related to the color and brightness around it. Retinex is a combination of retina and cortex Land designed the word to show that he did not know whether the characteristics of the visual system depended on either of these two physiological structures or were related to both.
Land's Retinex model is based on the following:

(1) The real world is colorless. The color we perceive is the result of the interaction between light and matter. The water we see is colorless, but the water film soap film is colorful, which is the result of light interference on the surface of the film;
(2) Each color region is composed of red, green and blue primary colors of a given wavelength;
(3) The three primary colors determine the color of each unit area. The ability of the object to reflect X-rays is determined by the absolute intensity of the medium wavelength (red) and the short wavelength (green) rather than the basic intensity of the light; The color of the object is not affected by the non-uniformity of illumination and has consistency, that is, the Retinex theory is based on the consistency of color perception (color constancy). As shown in the figure below, the image S of the object seen by the observer is obtained by the reflection of the object surface on the incident light L, and the reflectivity R is determined by the object itself and is not changed by the incident light L.

The basic assumption of Retinex theory is that the original image S is the product of illumination image L and reflectivity image R, which can be expressed in the form of the following formula:

The purpose of Retinex based image enhancement is to estimate the illumination L from the original image S, so as to decompose R and eliminate the influence of uneven illumination, so as to improve the visual effect of the image, just like the human visual system. In processing, the image is usually transferred to the logarithmic domain, i.e

The function f(x) realizes the estimation of the contrast degree L (it can be understood that many actually estimate the r component directly).

2. Understanding of Retinex theory
If you look at the paper, then in the following pages, you will certainly introduce two classic Retinex algorithms: path based Retinex and center / surround based Retinex. Before introducing the two classical Retinex algorithms, I will first talk about my personal understanding, so that friends who come into contact with the theory for the first time can understand it more quickly. Of course, if there is any problem with my understanding, please help me point it out.
As far as I understand, Retinex theory is similar to noise reduction. The key of this theory is to reasonably assume the composition of the image. If the image seen by the observer is regarded as an image with multiplicative noise, the component of incident light is a multiplicative, relatively uniform and slow transformation noise. What Retinex algorithm does is to reasonably estimate the noise at each position in the image and remove it.
In extreme cases, we can think that the components in the whole image are uniform, so the simplest way to estimate the illuminance L is to calculate the mean value of the whole image after transforming the image to the logarithmic domain. Therefore, I designed the following algorithm to verify my conjecture. The process is as follows:
(1) Transform image to log domain

2 dark channel
2.1 he Kaiming's dark channel prior defogging algorithm is a well-known algorithm in the field of CV defogging. The paper on this algorithm "Single Image Haze Removal Using Dark Channel Prior" won the best paper of CVPR in 2009. The author counted a large number of fog free images and found a rule: among the three RGB color channels of each image, the gray value of one channel is very low and almost tends to 0. Based on the prior knowledge that can almost be regarded as a theorem, the author proposes a dark channel a priori defogging algorithm.
The mathematical expression of the dark channel is: 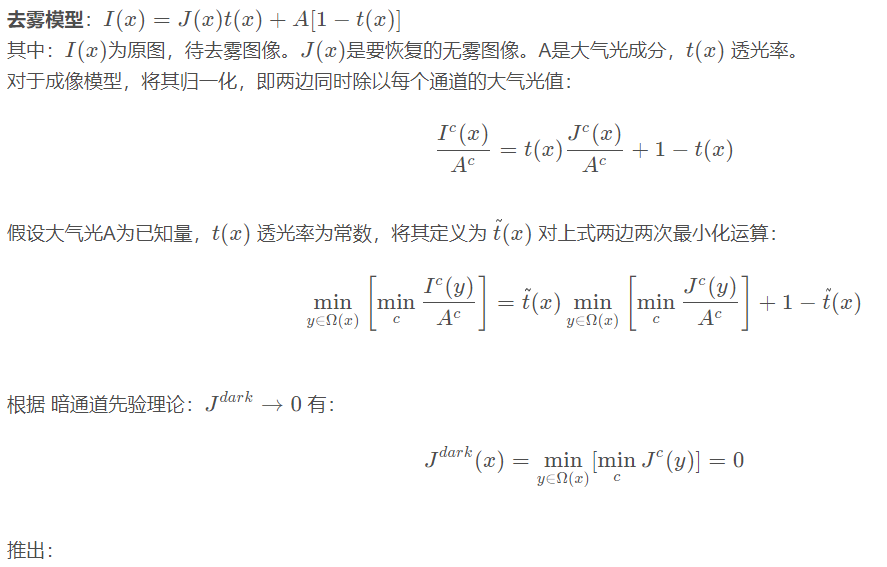 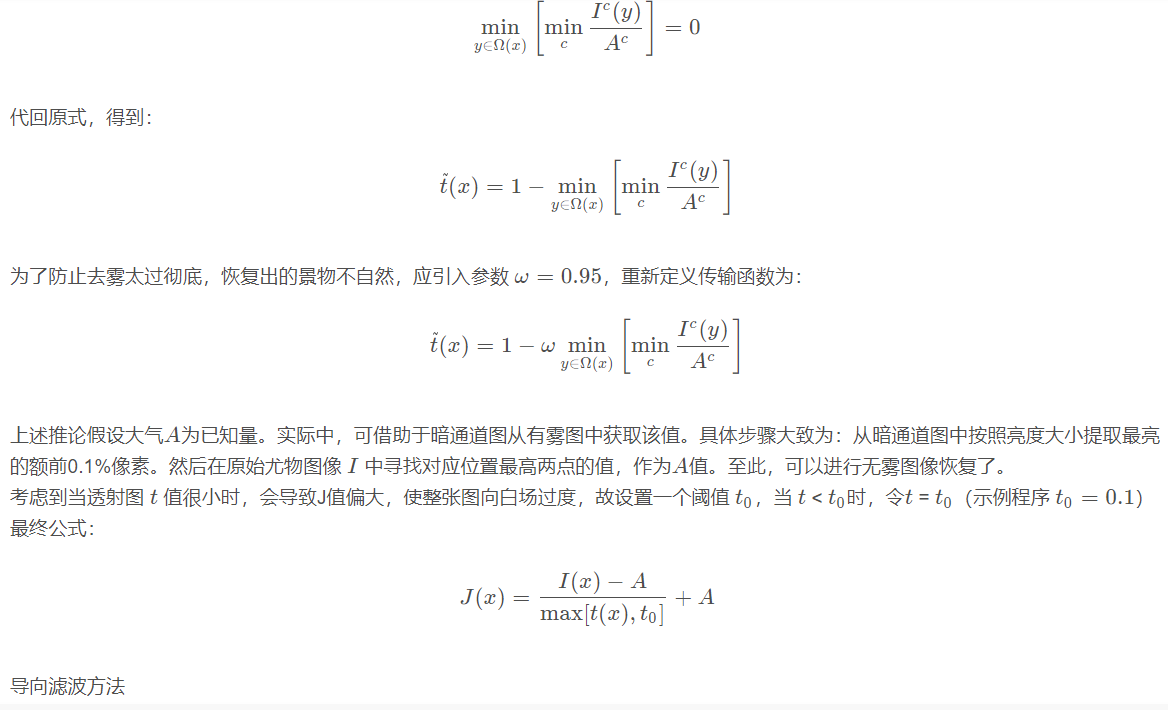 Due to the large number of running results of various algorithms, summary and comparison are provided here: