[see for the above video notes http://www.autolabor.com.cn/book/ROSTutorials/]

The function package for saving maps in ROS is map_server

The navigation feature pack set assumes that it can publish geometry through the topic "cmd_vel"_ Msgs / twist type message. This message is based on the base coordinate system of the robot, which transmits motion commands. This means that a node must subscribe to the "cmd_vel" topic, convert the speed command on the topic into motor command and send it.

In the navigation function pack, environment awareness is also an important module implementation, which provides support for other modules. Other modules such as SLAM, amcl, move_ All databases need to rely on environmental awareness.

[judge the location according to your surroundings]

When positioning the sensor, the parent reference system is generally called map.

When the two are used together, map and odom are the parent of the root coordinate system of the robot model, which does not comply with the principle of "single inheritance" in coordinate transformation. Therefore, the transformation relationship is generally set to: Map - > Doom - > base_ Link or base_footprint.

Although the navigation function package is designed to be as general as possible, there are still three main hardware limitations when using it:

There are many SLAM algorithms. At present, we choose gmapping.

gmapping is one of the more common and mature SLAM algorithms in the ROS open source community. gmapping can draw a two-dimensional grid map according to mobile robot odometer data and lidar data.

The core node in the gmapping function package is slam_gmapping. In order to facilitate calling, you need to know the topics subscribed, published, services and related parameters of the node.

map_metadata(nav_msgs/MapMetaData): Map metadata, including the width, height and resolution of the map. The message will be updated regularly.

~map_update_interval(float, default: 5.0): map update frequency. The update interval is designed according to the specified value.

~Maxrange (float, default: 80.0): the maximum available range of laser detection (beyond this threshold, it is truncated).

You can see a map in rviz. Control the trolley movement to further draw the map

When checked, the map and odm coordinates of the starting point, base, will be displayed_ Footprint can display the distance relationship between the current position and the origin. Other options can be adjusted as needed 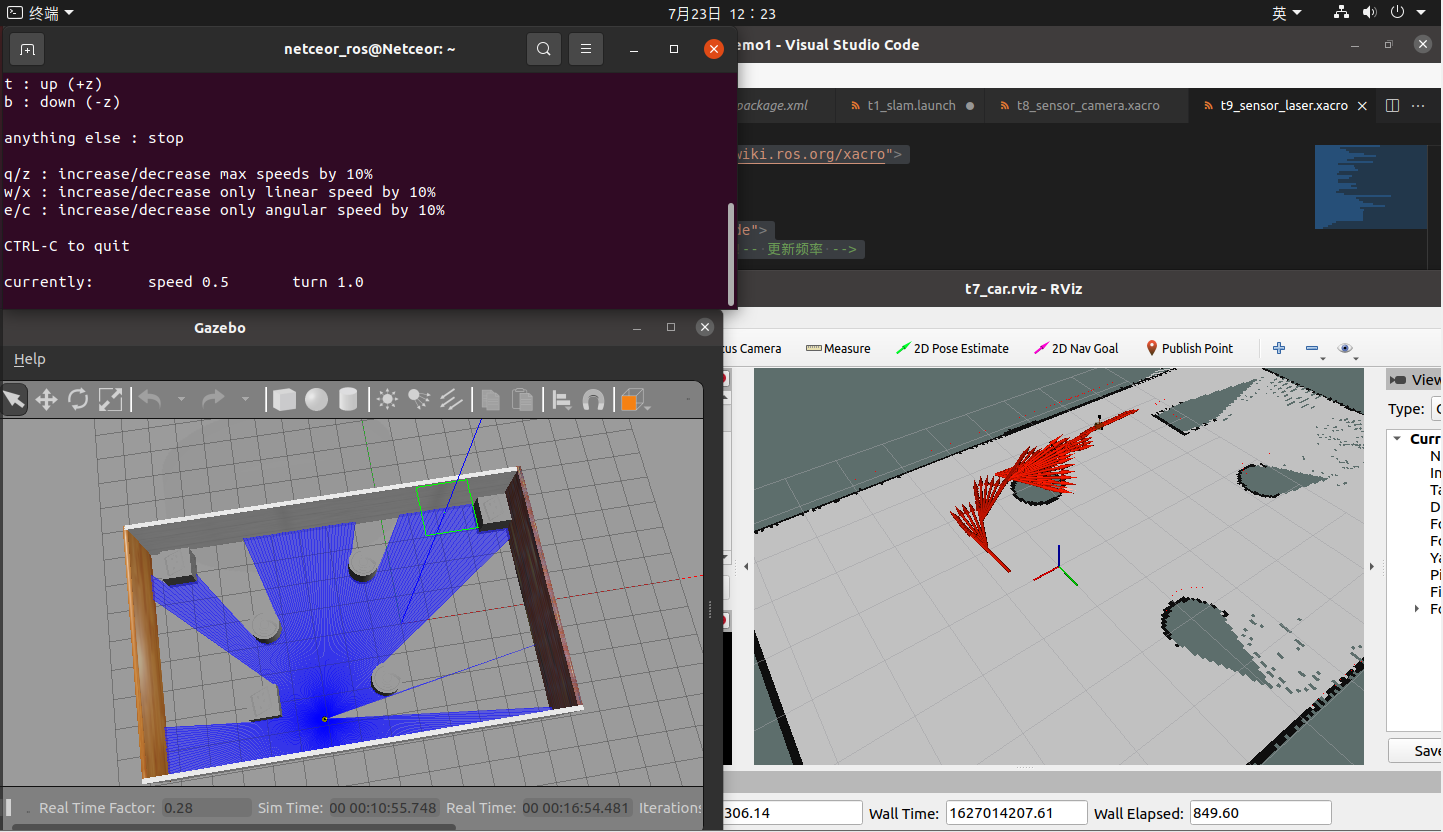 map_ The server function pack provides two nodes: map_ Savers and maps_ Server, the former is used to save the grid map to the disk, and the latter reads the grid map on the disk and provides it as a service.

map(nav_msgs/OccupancyGrid): subscribe to this topic to generate map files.

In nav_ In the demo / map directory, you will see that two map files have been generated

Directly use the picture viewer to open it. 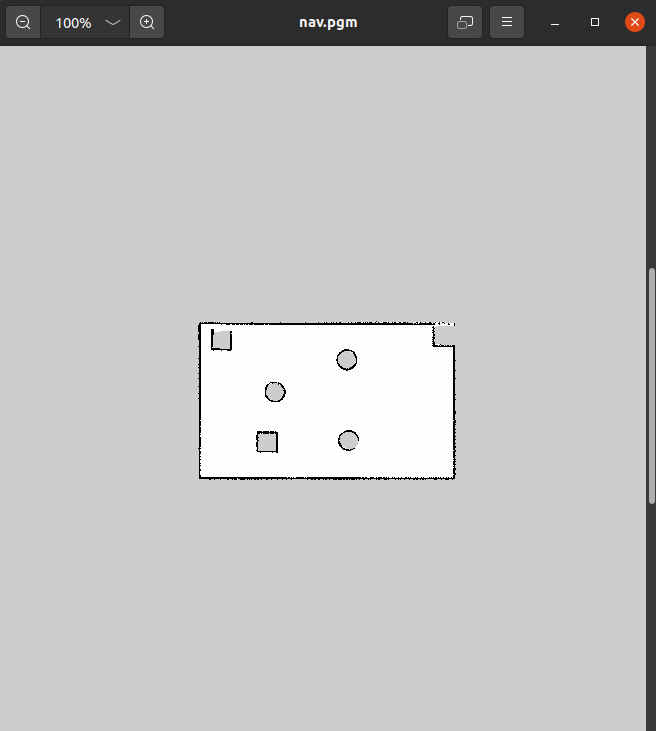 It is used to describe pictures. The content format is as follows:

c. Judge whether it is an obstacle according to the proportion calculated in step 2, if P > occupied_ Thresh, then it is regarded as an obstacle if P < free_ Thresh is then regarded as nothing.

[there was no map topic when I started it for the first time. It will be useful after restarting vscode] 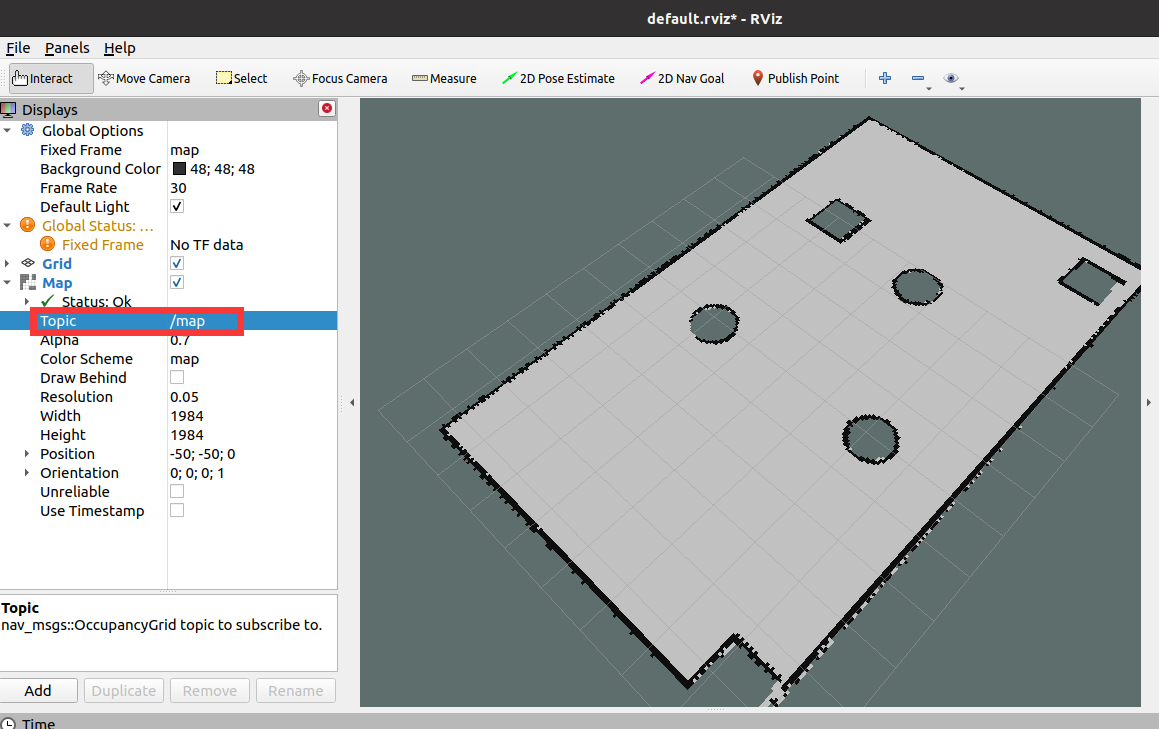