If we decompile the above suspended function into Java, the result will be as follows:

From the result of decompilation, the suspended function has indeed become a function with CallBack, but the real name of the CallBack is Continuation. After all, it's too low to call CallBack directly, isn't it?

Let's look at the definition of Continuation in Kotlin:

Compare the definition of CallBack:

From the above definition, we can see that Continuation is actually a CallBack with generic parameters. In addition, there is a CoroutineContext, which is the context of the collaboration. For small partners familiar with Android development, it's just context! There's nothing hard to understand, right?

The above process of converting a pending function into a CallBack function is called CPS transformation.

The following animation shows the change of function signature during CPS conversion of suspended function:

This transformation looks simple, and there are some details hidden in it.

During the CPS conversion above, the type of the function changes: suspend () - > string becomes (Continuation) - > any?.

In this CPS conversion, suspend () becomes continuation, which we have explained earlier. It's not difficult. So why does the return value of the function change from: String to Any?

As long as there is a function decorated with suspend, it is a suspended function. For example, our previous example:

When getUserInfo() executes to withContext, it will return coroutinesimpletons.coroutine_ Suspended indicates that the function is suspended.

Now the question arises. Is the following function a suspended function

Answer: it is a pending function. But it is different from the general suspended function: when it is executed, it will not be suspended because it is an ordinary function. When you write such code, the IDE will also prompt you that suspend is redundant:

The return type is Any? Reasons for

Because of the suspend modified function, it is possible to return coroutinesimpletons.coroutine_ Suspended may also return the actual result "no suspend", or even null. In order to adapt to all possibilities, the return value type of the function after CPS conversion can only be Any? Yes.

The above is the details of function signature during CPS conversion.

However, this is not all about CPS conversion, because we don't know what Continuation is.

The word Continuation, if you look it up in the dictionary(

), it may be confused. It's too abstract.

It will be easier to understand Continuation through the examples in our article.

Take the above code as an example. When the program runs getUserInfo(), its Continuation is the code in the red box below: 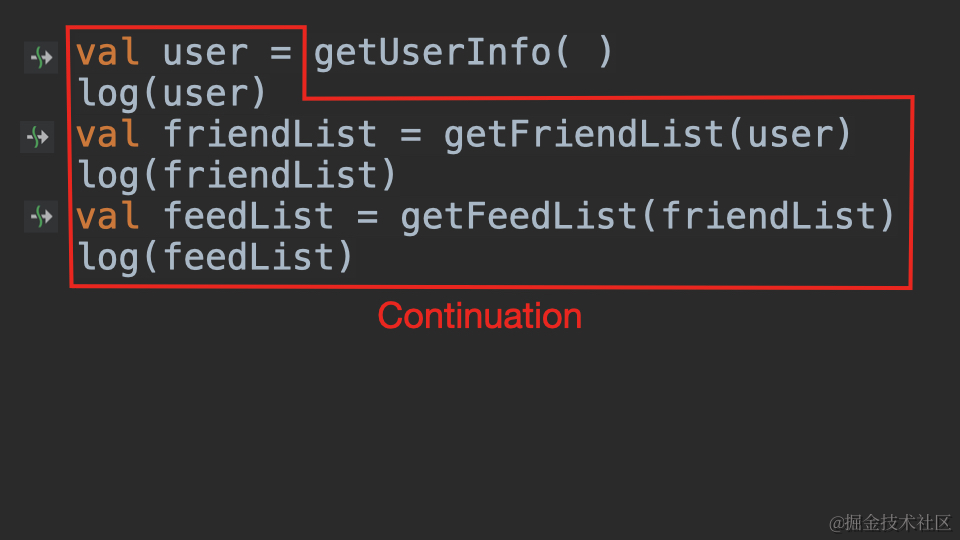 Continuation is the code to be run next, and the remaining unexecuted code.

After understanding Continuation, CPS is easy to understand. In fact, it is a mode of passing the code to be executed next.

CPS conversion is the process of converting the original synchronous pending function into CallBack asynchronous code. This conversion is done behind the scenes by the compiler, which is not perceived by our programmers.

There may be a little partner sniffing: so simple and rough? Do the three pending functions eventually become three callbacks?

Of course not. Thought is still the thought of CPS, but it is much better than Callback.

Next, let's take a look at the decompiled code of the pending function. There are so many mattings in front, all for the next part.

Therefore, in order to facilitate your understanding, the next code I post is roughly equivalent code after I translated it with Kotlin, which improves readability and erases unnecessary details. If you can understand everything in this article, you have more understanding of collaborative process than most people.

To get to the point, this is the object we will study, the code before decompilation of testCoroutine:

After decompilation, the signature of testCoroutine function becomes as follows:

Since several other functions are also suspended functions, their function signatures will also change:

Next, we analyze the function body of testCoroutine() because it is quite complex and involves calls to three suspended functions.

First, in the testCoroutine function, there will be a subclass of ContinuationImpl, which is the core of the whole coroutine suspension function. The comments in the code are very detailed. Please look carefully.

Next are the definitions of several variables. Detailed comments will be provided in the code:

Then we come to the core logic of our state machine. See the notes for details:

Warning: the above code is an improved version of decompiled code written by Kotlin. I will also release the real code after decompilation. Please continue to read.

Is it over? No, because the above animation only shows the normal suspension of each collaboration. What if the process doesn't really hang up? How does the process status opportunity work?

The collaboration process is not suspended

What about the decompiled code logic of a function body like testNoSuspend()?

The answer is actually very simple. Its structure is the same as the previous testCoroutine(), but the function name has changed. The logic of CPS conversion in Kotlin compiler only recognizes the suspend keyword. Even if it is a "pseudo" suspended function, the Kotlin compiler will still perform CPS conversion.