An open source framework based on workflow engine, contributed by Cloudera to Apache, provides task scheduling and coordination for Hadoop Mapreduce and Pig Jobs. Oozie needs to be deployed to the Java Servlet container to run.

Write the scheduling process in the form of xml, which can schedule mr, pig, hive, shell, jar, etc. 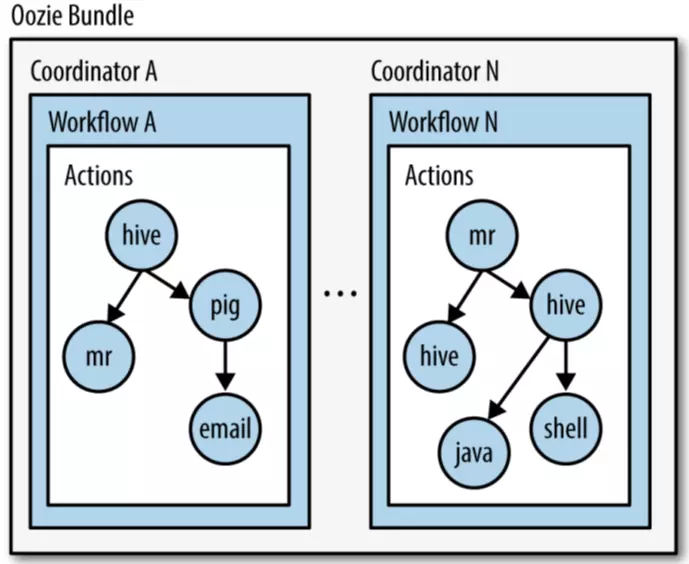 In short, we can't simply say that it is mainly to perform some actions, such as FS ACTION, which can delete files on HDFS, create folders, etc.

If you don't understand the concept of oozie scheduling framework, you can first learn the examples in the state of incomprehension, and then review the knowledge points, then you will naturally understand.

The architecture of Oozie is as follows: 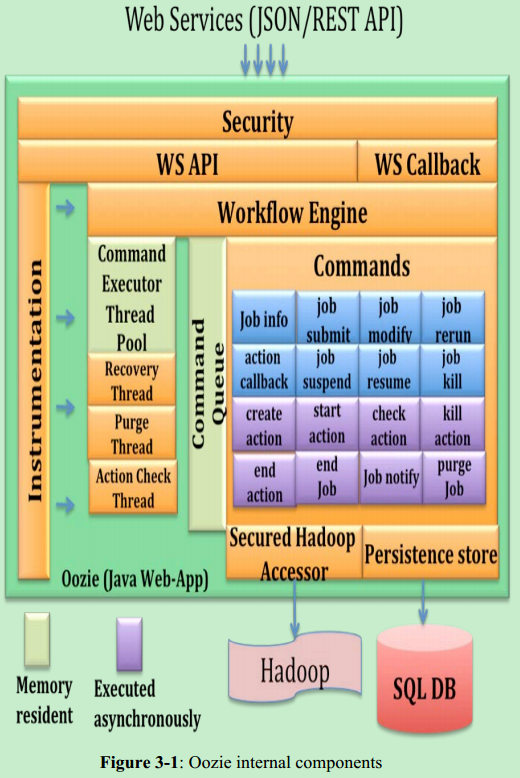 There are two types of Commands, one is synchronous, the other is asynchronous.

Users deploy jobs (MR Jobs) on HDFS, and then submit workflow to oozie, who submits jobs (MR Jobs) to Hadoop asynchronously. This is also the reason why a jobId can be returned immediately after the job is submitted by calling the RESTful interface of oozie, and the user program does not have to wait for the job to be executed (because some large jobs may be executed for a long time (several hours or even days)). Oozie asynchronously submits the Action corresponding to workflow to Hadoop for execution in the background.

In addition, Oozie provides an access layer to access the underlying cluster resources. This is one aspect of Hadoop Security.

4, Horizontal and vertical scalability of Oozie

Horizontal scalability is reflected in the following aspects:

The operation of the actual job (MR Action or JAVA Action) is managed and executed by handing it to Hadoop. Oozie Server is only responsible for querying the status of the job If the number of workflow submitted by users increases, simply add Oozie Server.

② The status of the job is persisted in the relational database (zookeeper will be considered in the future). Because the status of the job (such as MR Action status) is stored in the database, rather than in the memory of a single machine, it is very scalable. In addition, as mentioned above, the actual job execution is performed by Hadoop.

Vertical scalability is reflected in:

① Proper configuration and use of Commands in thread pool and queue.

③ Using the transaction model of the memory lock instead of the persistent model? – a bit confusing

Finally, how does Oozie get the execution results of jobs from Hadoop cluster? - callback and polling combined

Callback is to reduce the cost, polling is to ensure reliability.

5, The Action execution model of Oozie

① Oozie never run user code other than the execution of the workflow itself.

② The Oozie server is also stateless and the launcher job...

The statelessness of oozie server is actually that it persists the execution information of jobs to the database.

The execution model of Action is as follows: 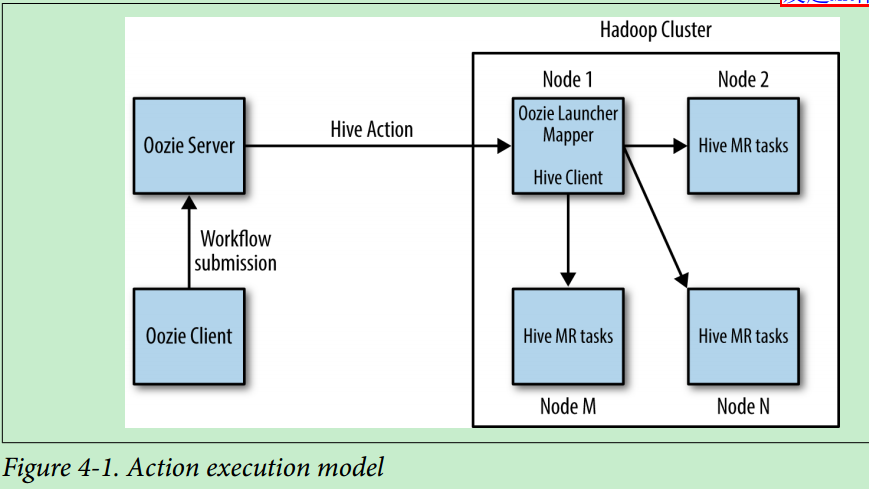 Oozie runs a specific Action through the launcher job. The launcher job is a map only Mr job, and it is unknown which machine it will execute the MR job on in the cluster.

In the figure above, Oozie Client submits a workflow to Oozie Server. Specific Hive Action should be executed in this workflow

We know that the launcher job is an MR job, which needs to occupy slots. That is to say, every time a workflow job is submitted, a launcher job will be created and occupy a slot. If the number of slots in the underlying Hadoop cluster is small, and there are many jobs submitted by Oozie, the launcher job will When the slot is used up, there is no slot available for the actual Action, which will lead to deadlock. Of course, you can prevent Oozie from initiating too many launcher jobs by configuring the relevant parameters of Oozie

In addition, because of this "launcher job mechanism", when the job needs to be handed over to Oozie to manage and run, it is necessary to deploy the job related configuration files on HDFS, and then send a RESTful request to Oozie Server to submit the job.