Overview: from state reuse to Hooks

Why can't Hooks be used in for loops and if statements

React.memo,React.useCallback,React. The role and comparison of usememo

The value in useState is an object. If you change the value in the object, will the component render? If you use react It's wrapped in memo()

What is the (Implementation) principle of Hooks?

What is the essence of Hooks? Why?

React Hooks, what convenience does it bring?

What is the difference between useEffect(fn, []) and componentDidMount

React Hooks is a new feature of React 16.8. It allows you to use state and other react features without writing a class

Why are there Hooks

We must have a concept, that is, what is the essence of react? It is characterized by UI=f(data), everything is a component, and declarative programming. Then, since UI=f(data), data drives UI view changes through function. In business, you can't simply show, but also interact. The interaction will update the state. React changes the state through setState. But this is limited to class components, so before Hooks, functional components were used to render components (also known as puppet components), and class components were used to control state

Then, in order to make the state reuse better, a Mixins ,render props and High order component . Admittedly, although render props and high-level components can be solved, they will bring side effects - components will form a "nested hell"

And the life cycle of class components will make complex components difficult to understand, the learning cost of class syntax and so on, which constitute hooks proposed by React team - let functional components have state management

It existed before the author used React and has been eliminated

Mixins is a way to extend the collection function. In essence, it copies the properties of one object to another object. However, you can copy any method of any number of objects to a new object, which cannot be realized by inheritance. Its appearance is mainly to solve the problem of code reuse

It is not analyzed here. The official document of React is in Mixins Considered Harmful The article mentioned the harm brought by Mixins:

The component with render prop accepts a function that returns the React element, and calls this function inside the component to implement its own rendering logic

The principle of HOC is actually very simple. It is a function, and it accepts a component as a parameter and returns a new component. Put the reused place in the high-level component. When you use it, you only need to do different uses

For example: just like giving you a bottle of water, you will drink it when you are thirsty; When you're handsome, you POSE with it; You give someone a drink when they need it, help them

Writing is cheap. Show me code

In this way, we can clearly see the benefits of HOC. "A bottle of water" is a common code. A, B and C process business codes, and then transfer a, B and C into HOC (a bottle of water), returning a new component AA, BB and CC. The same code is shared 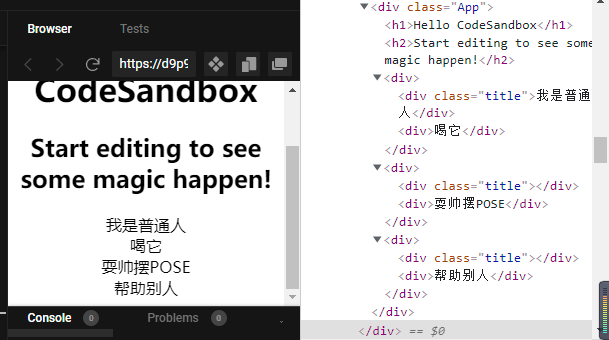 You can check it here demo

The use of HOC is not only code reuse, but also permission control, log printing, etc. However, its defects are not obvious. When HOC is widely used, it will produce a large number of nesting, which makes nesting difficult; Moreover, HOC will hijack props, which may cause conflict in case of non-compliance with the agreement

To summarize the HOC:

The birth of Hooks

The former has the power of state reuse (Mixins is suck out, render props and HOC have side effects). After that, complex components of class components are difficult to understand and maintain (excessive life cycle). this attribute caused by class attribute is also troublesome. So Hooks shouted: I'll come too

It has at least three benefits

Function: make function components have the ability to maintain state, and replace the constructor initialization state of class components

When using useState, there are two derivative problems:

Because functional components have the feature of Capture Value. From the perspective of source code, each call to setXX will cause re render to re render the component

If you want to get the latest value, you can save the value in memory through useRef

2: The value in useState is an object. If you change the value in the object, will the component render? How to optimize?

Generally, we use useState to follow a single value as much as possible, but it is inevitable to encounter some special cases. If the value is an object, change one of the attributes in the object and the other attributes remain unchanged, will the components that reference other attributes render?

Click div and modify the value of baz. Will DemoSon render? The answer is yes, why render? Because your reference value changes, a new virtual DOM is generated. When it is rendered to the view, the sub components will render. How to optimize so that components with unchanged data do not render repeatedly? I think there are two ways: one is to split data into foo object and name. Because setData does not change the name, DemoSon will not render. The other is to wrap DemoSon through memo, because memo can avoid re rendering

Function: handle side effects and replace componentDidMount, componentDidUpdate and componentWillUnmount of class components

PS: mount stage in the above notes, that is, when the component is loaded; update refers to the change of data (including props)

When using useEffect, you will face several problems:

1. What is the difference between useeffect (FN, []) and componentDidMount?

Although both useEffect(fn, []) and componentDidMount can represent the execution when the component is loaded, they are different in detail. If you want to talk about the details, you need to start from the source code. For details, see this article by the magician Kasong of the source code of React - [what is the difference between use effect (FN, []) and cDM?] ( https://mp.weixin.qq.com/s?__... )Yes, let me talk about my understanding here

In the render phase

The commit phase is divided into three sub phases

If it is labeled with Placement, the corresponding appendChild operation will be executed in the mutation stage, which means that the DOM node is inserted into the view, and then the componentDidMount is called in the layout stage

If it is labeled Passive, it will asynchronously call the callback function of useEffect after the execution of the three sub phases of the commit phase

Conclusion: there are two differences: first, the implementation time is different; 2, useEffect(fn, []) will capture props and state

The capture value feature will be described below with a demo

2. Each rendering has its own props and state

When rendering for the first time, the initial value of count is obtained from useState(0). When setCount(count + 1) is called, React re renders the component, and the value of count becomes 1. As follows:

Whenever we update the status, React re renders the component. Get the count state at the moment (snapshot) every rendering

Values are not captured in class components

This is the capture value of hooks. Similar examples are in How are functional components different from class components Introduced

Effects: side effects of synchronous execution

Consistent with the componentDidMount effect in class components, they are synchronously called in the layout phase after the view update (mutation phase) is completed in the commit phase

Function: memorize functions and avoid function regeneration. When a function is passed to a subcomponent, you can avoid repeated rendering of the subcomponent

In class components, the binding problem of this often puzzles people

4. Use arrow function binding in the definition phase

The first three will trigger rendering again due to changes in props or state of App components to render new handleclicks. The fourth method takes handleClick out and assigns it as a variable, and points to the storage function through this, which plays the role of cache

But useCallback can cache the function and make it "remember"“

Therefore, useCallback cannot be used alone. It needs to be connected with react Memo fit

However, useCallback will make the code less readable, so try not to use it

How to improve performance without useCallback?

The function of useCallback can be replaced by useMemo. If you want to return a memory function through useMemo, it is also possible

The parameters accepted by useMemo and useCallback are the same. They are executed after their dependencies change and return cached values. The difference is that useMemo returns the result of function operation and useCallback returns the function

useMemo returns a value to avoid expensive calculations at each render

Sub components are re rendered only when props changes

After being wrapped by memo, when props remains unchanged, the sub components will not render

About performance optimization, Dan once wrote an article: Before you write memo() In fact, before we use useCallback, useMemo and memo, we might as well try moving down the state and improving the content. The purpose is to make components that do not need to be rendered do not render repeatedly

Save reference values, similar to createRef. We are used to saving DOM with ref

Using useRef to save and update some data has certain advantages. It can save data without memory, so that these data will not be cleared when re rendering

It is not only used to manage DOM ref, but also equivalent to this. It can store any variable and solve the inconvenience caused by closures

useReducer: a method similar to redux. useState is based on its expansion

useImperativeHandle: transparently pass Ref, and the parent component gets the methods in the child component

Because useState and useEffect are function calls, we can combine them into our own Hooks

Custom Hooks allow different components to share reusable state logic. Note that the state itself is not shared. Each call to Hook only declares its own independent state

Although the functions of most class components are implemented, the two API s getSnapshotBeforeUpdate and componentDidCatch cannot be implemented

Appendix: rules of use

Hooks is essentially a JavaScript function, which should be followed when using it Two rules

Use Hook only at the top

Do not call Hook in loops, conditions or nested functions, make sure that they are always invoked before the top level of your React function and any return. By following this rule, you can ensure that hooks are called in the same order in each rendering. This allows react to maintain the correct hook state between multiple useState and useEffect calls

Call Hook only in React function

Instead of calling Hook in the ordinary JavaScript function, you can: