Principal component analysis and its application in face recognition

Recently, I was studying Turing textbook by myself< Python Basic course of machine learning ", take some notes in the form of blog on csdn.

We may have many purposes in using unsupervised learning for data transformation. The most common purpose is to visualize, compress data, and find a more informative data representation for further processing. Principal component analysis is the simplest and most commonly used method.

principal component analysis (PCA) is a method of rotating data sets, and the rotated features are not statistically related. After this rotation, a subset of the new feature is usually selected according to its importance to interpreting the data.

The following will illustrate the application of principal component analysis in two-dimensional data sets. 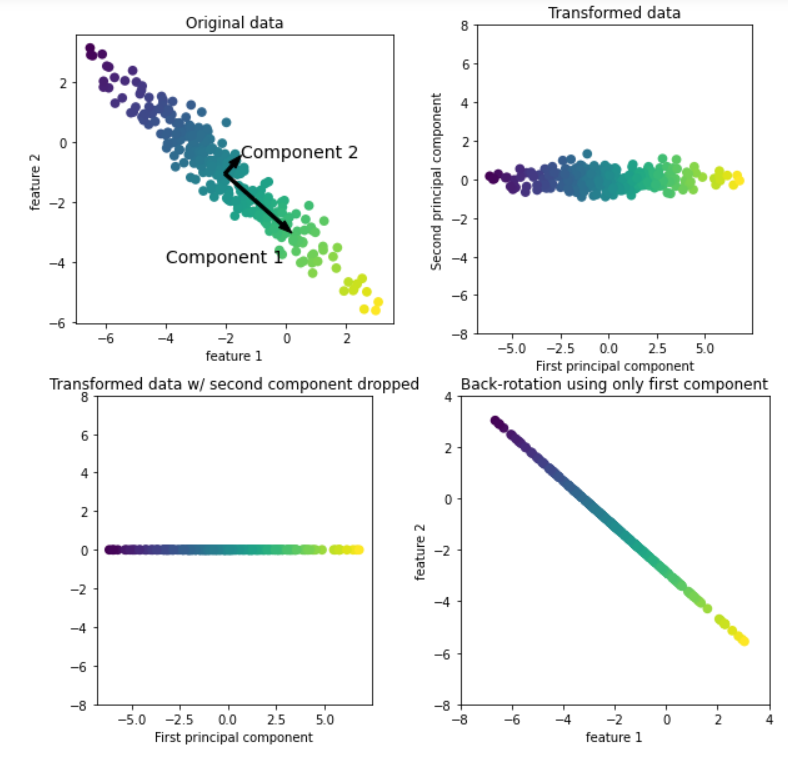 For the second image (upper right corner), we rotate the original data so that the first principal component is parallel to the x-axis and the second principal component is parallel to the y-axis. Of course, before rotation, we subtract the average value from the original data to make the transformed data centered on 0. In the rotation representation found by PCA, the two coordinate axes are uncorrelated, that is, for this data representation, the correlation matrix is all zero except diagonal.

For the third picture (lower left corner), we use PCA to reduce the dimension of the data by retaining the first principal component. This reduces the data from a two-dimensional data set to a one-dimensional data set. However, it should be noted that instead of retaining one of the original features, we found the direction containing the most information (from top left to bottom right in the first picture) and retained this direction, that is, the first principal component.

Finally, we can reverse the rotation and add the average value back to the data. This will get the data in the last picture in the lower right corner. These data points are located in the original feature space, but we only retain the information contained in the first principal component. This transformation is sometimes used to remove the influence of noise in the data, or visualize the part of information retained in the principal component.

One of the most common applications of PCA is to visualize high-dimensional data. For Iris (Iris) data set we are familiar with (less features), we can create a scatter matrix to show the local image of the data by showing all possible pairwise combinations of features. But if we want to look at the breast cancer dataset (the number of features), even if we use scatter plot matrix, it is also very difficult. This data set contains 30 features, which leads to the need to draw 30 * 14 = 420 scatter maps. We can never carefully observe all these images, let alone try to understand them. However, we can also use another visualization method: calculate the histograms of two categories (benign tumor and malignant tumor) for each feature.

We create a histogram for each feature to calculate the frequency of data points with a certain feature in a specific range. Each graph contains two histograms, one is all points of benign category (blue), and the other is all points of malignant category (green). In this way, we can understand the distribution of each feature in the two categories, and guess which features can better distinguish benign samples from malignant samples. For example, the "smoothness error" feature seems to have little information, because most of the two histograms overlap together, while the "worst concove points" feature seems to have a large amount of information, because the intersection of the two histograms is very small.

But this kind of graph cannot show the interaction between variables. Using PCA, we can obtain the main interactions. The first two principal components will be used to visualize the data in this new two-dimensional space. 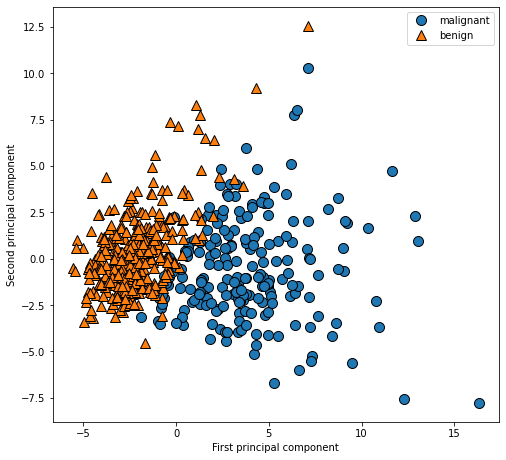 PCA is an unsupervised method, which does not use any category information when looking for the direction of rotation. It just observes the correlation in the data. For the scatter diagram shown here, we draw the relationship between the first principal component and the second principal component, and then use the category information to color the data points. It can be seen that the two categories are well separated in this two-dimensional space. Therefore, even a linear classifier (learning a straight line in this space) can perform quite well in distinguishing the two categories. We can also see that malignant points are more scattered than benign points, which can also be seen in the histogram above. 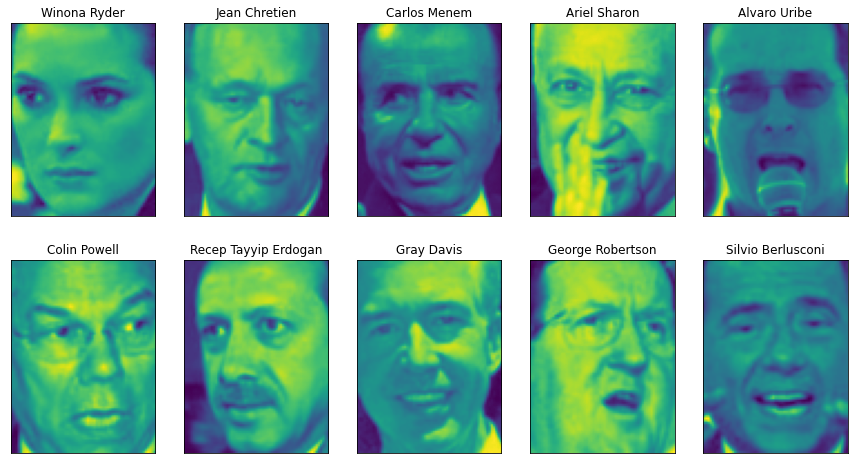 The above figure shows some images of Labeled Faces in Wild dataset; The data set contains 3023 images, each 87 pixels in size × 65 pixels, belonging to 62 different people. Let's take a look at the number of times each target appears in this data set. 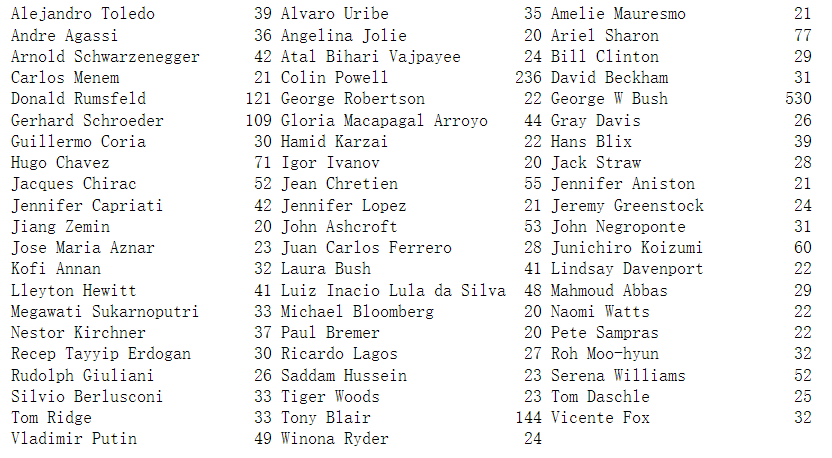 We can find that {it contains a large number of images of George W. Bush and Colin Powell, so the data set has a certain skew. In order to reduce data skew, we only take 50 images for each person at most (otherwise, feature extraction will be greatly affected by the possibility of George W. Bush)

Next, we build a simple KNN classifier (K=1) to find the face most similar to the face you want to classify.

We get an accuracy of 0.23. In other words, it will succeed every four times. This is not bad for the classification problem with 62 categories (the accuracy of random guess is 1 / 62), but it is not very good. So we can use PCA to measure the similarity of human faces. It is a bad method to calculate the distance in the original pixel space. When comparing two images with pixel representation, we compare the gray value of each pixel with that of the corresponding position of the other image. This representation is very different from the way people interpret face images. It is difficult to obtain facial features using this original representation. For example, if the pixel distance is used, moving the face one pixel to the right will greatly change and get a completely different representation. We want to use along the main line

Our accuracy has improved significantly, from 23% to 31%, which confirms our intuition that principal components may provide a better data representation.

Next, we will look at the first few principal components 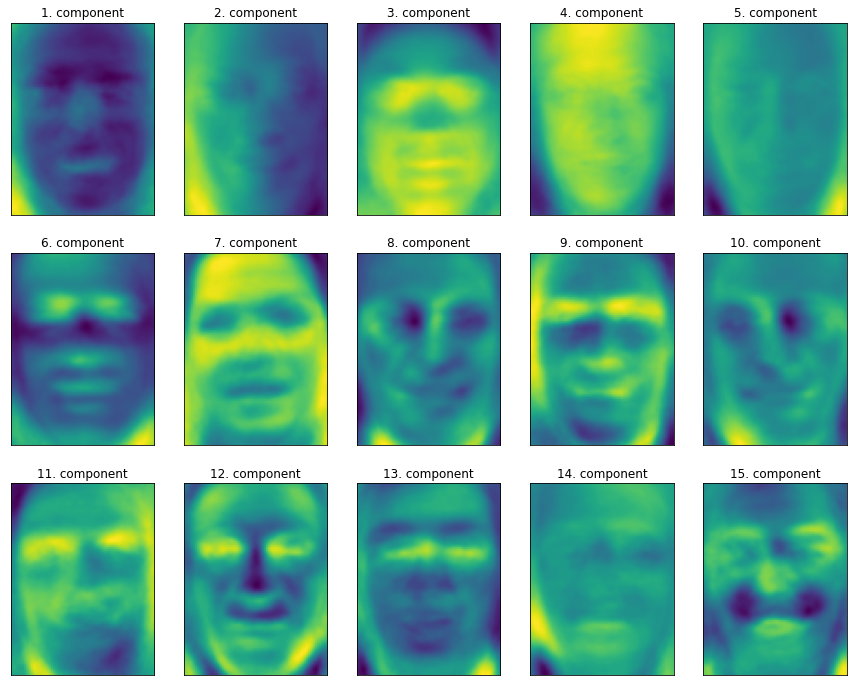 Although we certainly cannot understand all the contents of these components, we can guess what aspects of the face image are captured by some principal components. The first principal component seems to mainly encode the comparison between the face and the background, and the second principal component encodes the difference in the brightness of the left and right parts of the face, and so on. Although this representation is slightly more semantic than the original pixel value, it is still far from the way people perceive human faces. Because PCA model is based on pixels, the relative position of human face (the position of eyes, chin and nose) and the degree of light and shade have a great impact on the similarity of the two images in pixel representation. However, the relative position and brightness of the face may not be the first thing people perceive. When people are asked to evaluate the similarity of faces, they are more likely to use attributes such as age, gender, facial expression and hairstyle, which are difficult to infer from pixel intensity. Importantly, algorithms often interpret data (especially visual data, such as images that people are very familiar with) in a very different way from human interpretation.

Our introduction to PCA transformation is to rotate the data first, and then delete the components with small variance. Another useful explanation is to try to find some numbers (New eigenvalues after PCA rotation), so that we can represent the test points as the weighted sum of the main components.

Here, x0, x1, etc. are the coefficients of the principal components of the data point, in other words, they are the representation of the image in the rotated space.

We can also use another way to understand PCA model, that is, only use some components to reconstruct the original data. In Figure 3-3, after removing the second component and coming to the third figure, we rotate reversely and add the average value again, so as to obtain new data points with the second component removed in the original space, as shown in the last figure. We can do a similar transformation on the face, reduce the dimension of the data to only contain some principal components, and then rotate it back to the original space. Back to the original feature space, you can use inverse_transform method. Here, we use 10, 50, 100 and 500 components to reconstruct and visualize some faces. 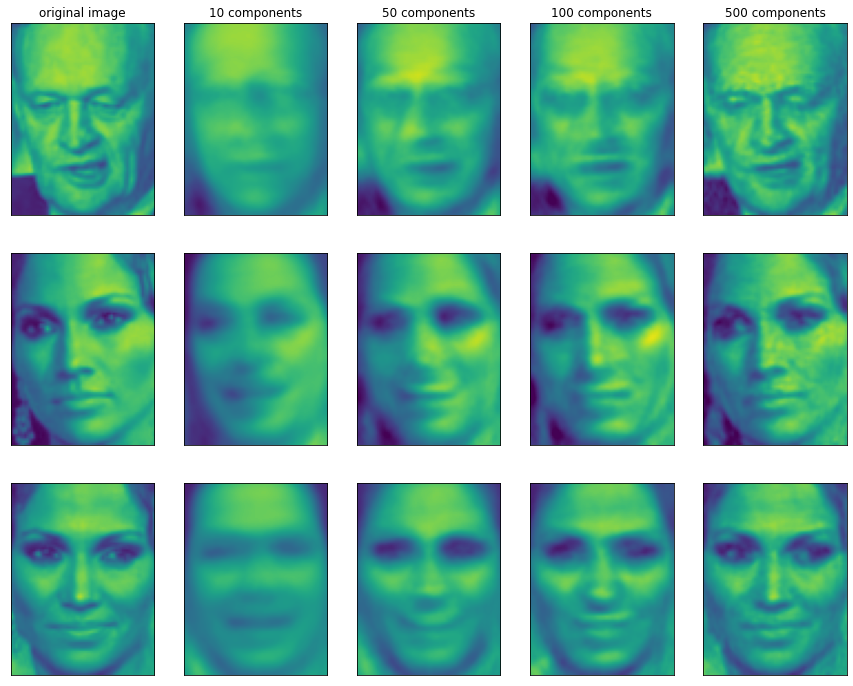