The term coroutines was put forward in 1958. Coprocessing was invented and used to build assemblers, which shows that coprocessing is a programming idea and is not limited to a specific language. The author simply passed through the document and recorded some things. There are some things that are not commonly used that have not been studied. I will add later. The article is a little long and may be a little dry. First, I put on my favorite panda picture. 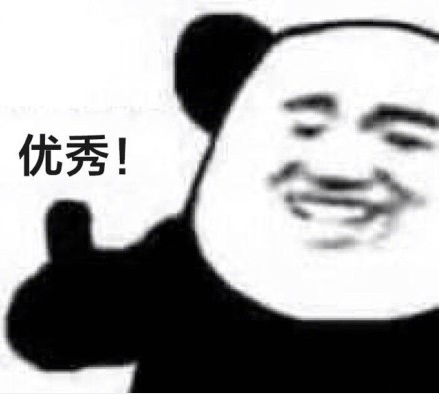 Supplement 1: Why are there so many processes in the task manager of my 8-core 16 thread processor?

Take AMD3700x 8-core 16 thread processor as an example. Strictly speaking, it has only 8 cores. At the same time, there should be only 8 processes and 16 threads running. But in fact, whether it's a process or a thread, it's far more than that. Why? Because now the hardware performance is very good, the process switching is very fast, and it gives people a macro feeling that multiple programs are running at the same time, so there are so many processes and process trees in the task manager.

Concurrency: in the operating system, several programs run on the same CPU at a certain time, but only one program runs on the CPU at any point in time.
Parallel: when the operating system has multiple CPUs, the operation of threads may be non concurrent. When one CPU executes one thread, the other CPU can execute another thread. The two threads do not preempt CPU resources and can be carried out at the same time. This method becomes parallel.

Process is the smallest unit of resource allocation. Thread is the smallest unit in the process of program execution.
In fact, the operating system has its own set of process management methods, because it needs to be used by people. All of them have a kernel state and user state. Have you found one thing? Some processes in the task manager can't be turned off or the direct black screen can't be turned off. Yes, users should pay close attention to your user threads and don't move the system if there's nothing else.

Supplement 4: the efficiency of threads is so high. Why do you need to cooperate

Coprocess is a lightweight thread in user mode. Compared with processes, threads occupy less memory and consume less resources during switching. The essence of collaborative process is a single thread, which performs generally in CPU intensive applications, but now the hardware performance is getting better and better, and the collaborative process performs well in most applications.

The CoroutineContext with scope inside is the scope of the collaboration. The use of a collaboration cannot be separated from its scope. All collaboration builders are declared as extensions on it.

CoroutineContext is used as the coroutine context. A collaboration context is a collection of various elements, and its main element is a Job in the collaboration. Sometimes we need to define multiple elements in the context of a collaboration. We can use the + operator to implement it (it's an operator on the surface, but it's actually an operator function 😏).

Collaborative scheduler. All collaboration builders such as launch and async receive an optional CoroutineContext parameter, which can be used to explicitly specify a scheduler for a new collaboration or other context elements. If not specified, the context (and scheduler) is inherited from the CoroutineScope that started it.

Closures have been supported since Java 8. There is a syntax sugar in kotlin: when the last parameter of a function is a lambda expression, you can write lambda outside parentheses.
Examples

For more information about threads and locks in Java, see Basic knowledge of Java Thread and lock section in.

What is a collaborative process?

What is a hang?

When the code block closed in a launch, async or withContext function is executed to a suspend function, the coroutine will be "suspended", that is, suspended. In other words, it is detached from the thread executing him. It will not block the current thread.

What is hanging: a thread scheduling operation that will be automatically cut back later.

"Non blocking hang" is a very powerful part of the collaboration process. Blocking is for a single thread, because hanging involves multiple threads. Once the thread is cut, it must be non blocking. After the thread is cut, the original thread is free and there are no obstacles. You can continue to do other things.

Code is essentially blocking, and only time-consuming code will lead to human perceptible waiting. For example, a network request is more reflected in "waiting". How many threads you cut can't reduce the time it takes. This has nothing to do with half a dime of the collaborative process. The collaborative process just helps us cut threads, so it looks like writing asynchronous code in a synchronous way.

To use a coroutine, there must be a scope, and the scope must have a context.

Top level functions in any class use

The top-level function is similar to the global static function in java.

The print result of this example is: Hello,World!My Name is Tom!

Some official architectures encapsulate the support for collaborative processes

Here is a brief mention, such as lifecycle. In ViewModel Coroutinescope also has lifecycle in the active and fragmented pages coroutineScope.

In the scope, the common methods are async, launch, withcontext and actor.

An interface is the focus of the collaborative process.

Many usages can refer to async

Supplement 1: CoroutineStart is the startup option of collaborative process

The print result is

launch starts a coroutine s, which runs in the main thread mian, and the result is the same whether you call the function directly or wrap it with withcontext. It looks like writing asynchronous code in a synchronous way.

Change it a little

The print result is

The results show that doSomeThing and doOtherThing are executed asynchronously. It is completely different from the synchronization in example analysis 1.

Android provides first-class support for collaboration scope in all entities with life cycle, such as ViewModel, lifecycle, livedata, room, etc.

We know that the scope is related to the life cycle. Here are some examples to illustrate the use of coprocedures in different scenarios

A labeled scope is used. The context uses:

With a scope, you can use a coroutine.

Analysis: the implementation of viewModelScope is very simple, with dispatchers Main's SupervisorJob, when ViewModel When clear(), call job Cancel(), because of structural concurrency, all collaborations started within the scope of viewModelScope will be cascaded and cancelled

In Activity or Fragment, we sometimes need to wait until a certain life cycle method, or at least after a certain life cycle method, to execute a task. For example, the page state must be at least STARTED before FragmentTransaction can be executed. For this demand, the Lifecycle library provides support for the process: launchWhenCreated, launchWhenResumed, launchWhenStarted. When the page status is not satisfied, the collaboration will hang.

Another point is that we mentioned above that some resources can be released inside the onCleared method of ViewModel. In the active page and fragment, although it can be in onDestroy, after knowing that the page will be destroyed and the collaboration will be automatically cancelled, we can write part of it in the collaboration. The example is as follows

Here, liveData is a builder function. In the builder code block, it calls the suspend function loadUser() and then emits the loaded data through emit
It should be noted that when the status of LiveData becomes active (i.e. someone subscribes to observe it), the loading action will be actually executed. When it becomes inactive and idle for timeout INMS milliseconds, it will be automatically cancelled If you cancel it before you finish, LiveData will restart if it becomes active again. If it completes successfully in a previous run, it will not restart. Please note that it will not restart until it is automatically cancelled. If the block is canceled for any other reason (for example, a CancelationException is thrown), it will not restart.

At any time, if you want to emit new values, you can also use emitSource(source: LiveData) to emit multiple values. Here, the source of its values has changed Calling emit() or emitSource() removes the previously added source

Use record of Flow

Recall that a collaboration scope has both launch and async methods. The former returns a Job object and the latter returns a Deferred object. Then lauch does not propagate exceptions, that is, exceptions will not affect the code operation, while async propagates exceptions. If an exception is thrown by a process in the scope and not handled, the whole process in the scope will be cancelled. Therefore, it is often handled by runCatching function or try catch.

Asynchronous data flow, which issues values sequentially and completes normally or with exceptions.
Intermediate operators in streams (such as map, filter, take, zip, etc.) are functions that apply to one or more upstream streams and return downstream streams. Other operators can be applied to them.
The intermediate operation does not execute any code in the stream and does not suspend the function itself. They only set up a series of operation chains for future execution and quick return. This is called the cold flow characteristic.
The terminal operator on the stream is either a pause function, such as collect, single, reduce, toList, etc., or a launchIn operator, which starts to collect the stream within a given range. They will be applied to upstream processes and trigger the execution of all operations. The execution of a stream is also called a collection stream and is always suspended without actual blocking. The terminal operator performs normal or exceptional operations based on the success or failure of all flow operations in the upstream.
The most basic terminal operator is collect, for example:

By default, the flow is sequential, and all flow operations are executed sequentially in the same process, except for some operations specifically used to introduce concurrency into the flow execution (such as buffer and flatMapMerge).

Seeing the operator, I thought of rxjava for the first time. What about the usage scenario of flow? It feels the same.

Mutex is required for synchronization of processes

Tip: don't take it for granted to add the @ Synchronized keyword to the suspended function. Do you think it's useful? I can't sync at all. If you don't believe it, practice it.