The three neural networks described above are "series", just the continuous stacking of convolution layers, and the structure is relatively simple. The next two blogs will introduce the "parallel" structure in GoogLeNet and ResNet, which are also the last two neural networks to be introduced before officially entering the target detection algorithm! 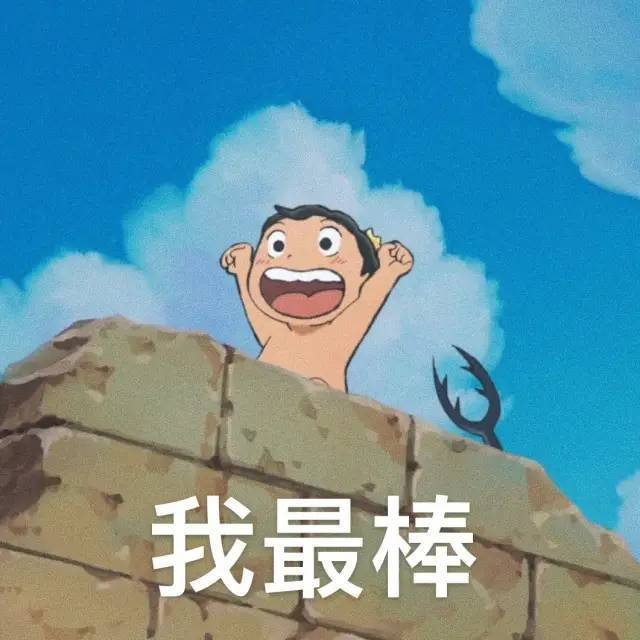 The overall framework of target detection is composed of backbone, neck and head. Therefore, before learning the specific target detection algorithm, it is necessary to understand the common convolutional neural network structure, which is conducive to learning the backbone part of the target detection algorithm later. AlexNet and VGGNet mentioned earlier obtain better training results by increasing the number of network layers, but blindly increasing the number of network layers will cause a waste of computing resources. To increase network complexity, we should consider not only "depth" but also "width". GoogLeNet's practice has inspired a series of network structures behind, so it is necessary to understand.

VGGNet mentioned in the last blog won the runner up in the ImageNet image classification competition in 2014, and the champion is GoogLeNet introduced in this article. GoogLeNet focuses on deepening the network structure, with a total of 22 layers without a full connection layer. At the same time, it introduces a new basic structure - Inception module to increase the width of the network, which is also the core improvement. The original idea of GoogLeNet is very simple. To better predict the effect, we should increase the complexity of the network from the perspectives of network depth and network width. But there are two obvious problems in this idea: first, more complex networks mean more parameters. Even ILSVRC, a data set with 1000 labels, is easy to over fit; Secondly, more complex networks will consume more computing resources, and the unreasonable design of the number of convolution cores will lead to the incomplete utilization of the parameters in the convolution core (multiple weights approach 0), resulting in a waste of computing resources. GoogLeNet solves the above problems by introducing the concept module.

concatenation, also referred to as concat or cat, is actually a feature fusion method, that is, integrating the information of the feature graph. Concat can be regarded as a separate layer to realize the splicing of input data. How to splice it? Here is an example:

It can be seen that the splicing between matrices is actually completed, and the dimension is increased. PyTorch also has a corresponding cat() method, which can specify splicing according to a certain dimension. For example, for a matrix, spelling by row is "vertical spelling" and spelling by column is "horizontal spelling". The parameter dim is 0 by default, and the second dimension of the feature graph in PyTorch is channels (batch_size) × channels × height × Width), the so-called feature fusion concat is to superimpose and splice feature maps of the same height and width together according to channels, so when writing code, you should specify dim=1. If you want to concatenate two feature maps, you generally need to adjust their height and width to the same size through up sampling or down sampling. The following is an example of using the cat() method in PyTorch, which is actually easy to understand:

There are many versions of GoogLeNet. The difference is mainly reflected in the improvement of concept. Each version of concept is improved on the basis of the previous version. Let's take a look at the original concept V1, which is also the core module of GoogLeNet.

Thus, the structure shown in the figure below is generated. In this structure, 256 are evenly distributed in 3 × 3-scale features are transformed into multiple clusters with different scales, which can make the calculation more effective and converge faster. The following is the most original structure. Using the concatenation method mentioned in the previous section, different sizes of convolution kernels are used to obtain different sizes of features and fuse them. The sizes of convolution kernels 1, 3 and 5 are used to facilitate alignment: set the step size to 1, fill 0, 1 and 2 for the convolution kernels of three sizes respectively, and fill 1 for the pooling operation. The stacking of characteristic graphs of the same size can be realized through the concatenation method (the same size, channel addition). 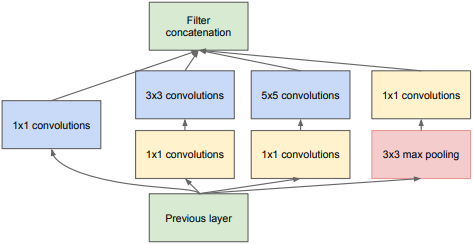 1 is used in the concept module × 1. Maybe many people have the same doubts as me when they first see this thing. 3 × 3,5 × What the hell is this? Actually, 1 × The emergence of convolution solves many problems and plays a great role, so we analyze a wave separately here.

one × 1 convolution first appears in Network in Network(NIN) Generally speaking, the main functions of this paper are as follows:

1. Reduce and upgrade the number of channels
2. Increase the nonlinearity of the network
3. Realize cross channel interaction and information integration
4. Achieve the effect equivalent to the full connection layer

For action 1, dimensionality reduction is mainly to reduce parameters. The discussion in the previous section is the best example. GoogLeNet is using 1 × After the convolution dimensionality reduction of 1, a more compact network structure is obtained. Although there are 22 layers in total, the number of parameters is only one twelfth of that of 8-layer AlexNet (of course, a large part of the reason is that the full connection layer is removed). The dimensionality increase is mainly to expand the number of channels of the network with the least parameters, such as 256 3 × The convolution kernel parameters of 3 are obviously larger than 256 1 × The convolution kernel of 1 is much larger.

For action 2, it is also easy to understand, because there is usually a nonlinear activation function behind the convolution layer, so use 1 × 1 convolution can increase the nonlinear characteristics on the premise of keeping the scale of the feature map unchanged (i.e. without losing resolution and changing height and width).

For function 4, the example of replacing the full connection layer with the volume layer in the VGGNet test phase in the previous blog should be understandable.

The structure of GoogLeNet is very complete. The original paper uses a whole side to show the network structure. The following is a screenshot of my pdf. 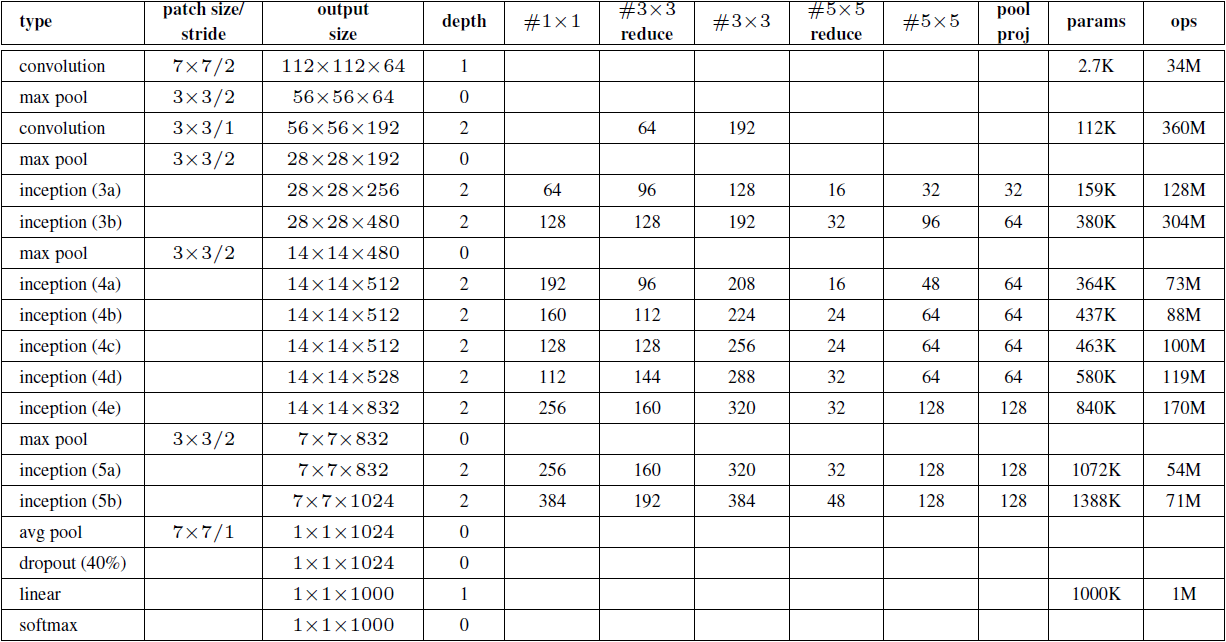 In addition to the previous discussion, the network has the following features:

First, implement the concept module. As can be seen from the previous figure, the Inception module has four parallel lines, and the first three lines use 1 respectively × 1,3 × 3 and 5 × The convolution kernel of 5 extracts the information under different spatial sizes, and the middle two lines will do 1 to the input × 1 convolution operation to reduce the number of input channels and reduce the complexity of the model. Line 4 will use 3 × 3. Maximize the pool layer, and then connect 1 × 1 convolution kernel changes the number of channels. Appropriate padding is used for all 4 lines, so that the height and width of the input and output characteristic diagrams are consistent. Finally, the output of each line is merged on the channel and input into the next layer. The implementation code of Inception v1 module is as follows:

Assume that the original input image size is 224 × two hundred and twenty-four × 3. The first module of GoogLeNet uses a 64 channel convolution kernel with a size of 7 × The convolution layer of 7, stripe = 2, padding=3, and the output size is 112 × one hundred and twelve × 64. Perform ReLU operation after convolution. After 3 × After the maximum pool operation of 3 (stripe = 2), the output size is 56 × fifty-six × 64.

The second module uses two convolution layers, first through 64 channel 1 × 1 roll up and then pass through 192 channels 3 × 3 convolution layer, corresponding to the second line from left to right in the Inception module.

The fourth module is a little more complicated, but it is very simple to understand, that is, five Inception modules are connected in series.

The fifth module is similar to the above module, but followed by the output layer. The module needs to use the average pooling layer to change the height and width of each channel to 1.

Finally, after the output is turned into a two-dimensional array, a full connection layer with the number of output as the number of label categories is followed.

The complete code is as follows:

You can add the following FlattenLayer to the front of the full connection layer container to replace the x.view in forward, and use the following code to view the output size of each layer:

The following is a brief introduction to the improvement of Inception v1: Inception v2. More variants such as Xception will not be discussed first. Later, there will be time to organize an inception series family. The reason why V2 is not introduced to the follow-up v3 is that many things in v3 have not been covered in the previous blog. The core idea of V2 is mentioned in VGGNet. Inception v2 and Inception v3 are in the same paper Rethinking the Inception Architecture for Computer Vision A paper on Batch Normalization is proposed Batch Normalization: Accelerating Deep Network Training by Reducing Internal Covariate Shift Not Inception v2. The difference between the two is that a variety of design and improvement technologies are mentioned in the paper. Some of the structures and improvement technologies are concept V2, and all of them are concept v3. 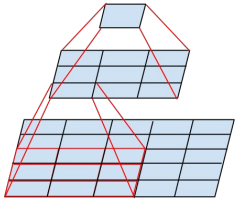 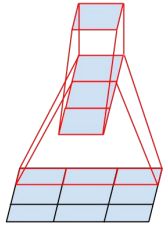 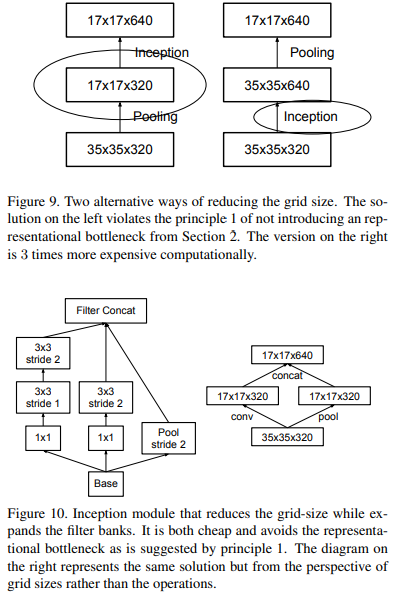 Unknowingly 1w many words orz, Batch Normalization can be recorded separately when there is time~