Analyzing the Routing module of Baidu Apollo -- by Paul's Bar

This article is one of the Apollo project series articles. It will analyze the Routing module in combination with the source code.

The source code of Apollo project can be obtained from github: ApolloAuto/apollo.

The source code posted in this article is from the version at the end of 2018 (December 27).

As its name indicates, the Routing module is mainly used to generate Routing information according to requests.

The implementation file structure of Routing module is shown in the following figure: 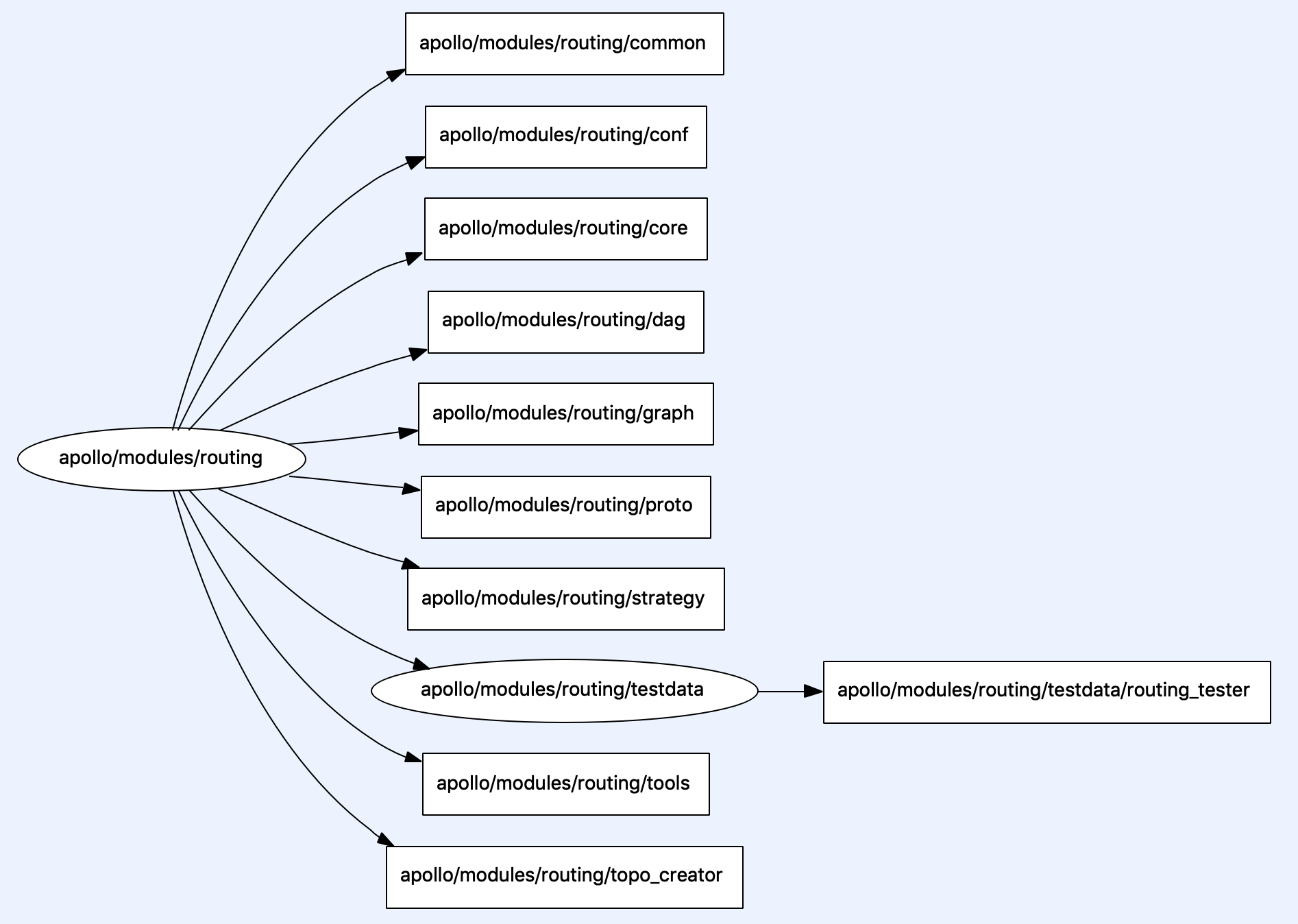 The Apollo project uses Google's gflags project to define constants. About gflags, you can visit the following two links:

The relevant codes in Routing are as follows. They are located in the header file and the implementation file, respectively.

Even if you haven't touched gflags, this code should be easy to understand. Here, you define five constants and specify their values, as well as the description of each constant. The five constants are:

Defining several constants commonly used in the module together can facilitate modification and use in the module.

For example, in the code of the Routing module, flags is used_ Routing_ conf_ File can read the value "/ apollo/modules/routing/conf/routing_config.pb.txt".

This is the configuration file path of the Routing module. The contents of the document are as follows:

The role of this configuration file will be mentioned later.

Many data structures in the Apollo project are through Protocol Buffers Defined. So you can't see the C + + files of these classes, because the relevant files required by C + + are automatically generated through the proto file at compile time.

A very important role of Apollo in using Protocol Buffers is to export structured data to physical files, and it can also easily read information from physical files. For example, the Topo map required by the Routing module is derived from the proto structure. In addition, if Exported as text The file can also be easily modified artificially. For example, the routing mentioned above_ config. pb. txt.

The proto files are located in the folder named proto. You can usually find all the proto folders in the root directory of the apollo source code with the following command:

This naturally contains the proto folder of the Routing module: modules/routing/proto .

This directory contains four proto files, and each file contains several structures. These structures are described as follows:

Proto files do not exist in isolation. Each proto file can use the structure defined in other files through import syntax.

For example, the data structures required by the Routing module and other modules are defined in modules/common/proto/ Directory. This includes the following proto files:

Due to space constraints, we will not continue here. Interested readers can browse these documents by themselves.

In order to calculate the Routing path, a series of classes are included in the Routing module to describe the detailed structure of the Topo map.

The definitions of these classes are located in modules/routing/graph/ Directory. Their descriptions are as follows: 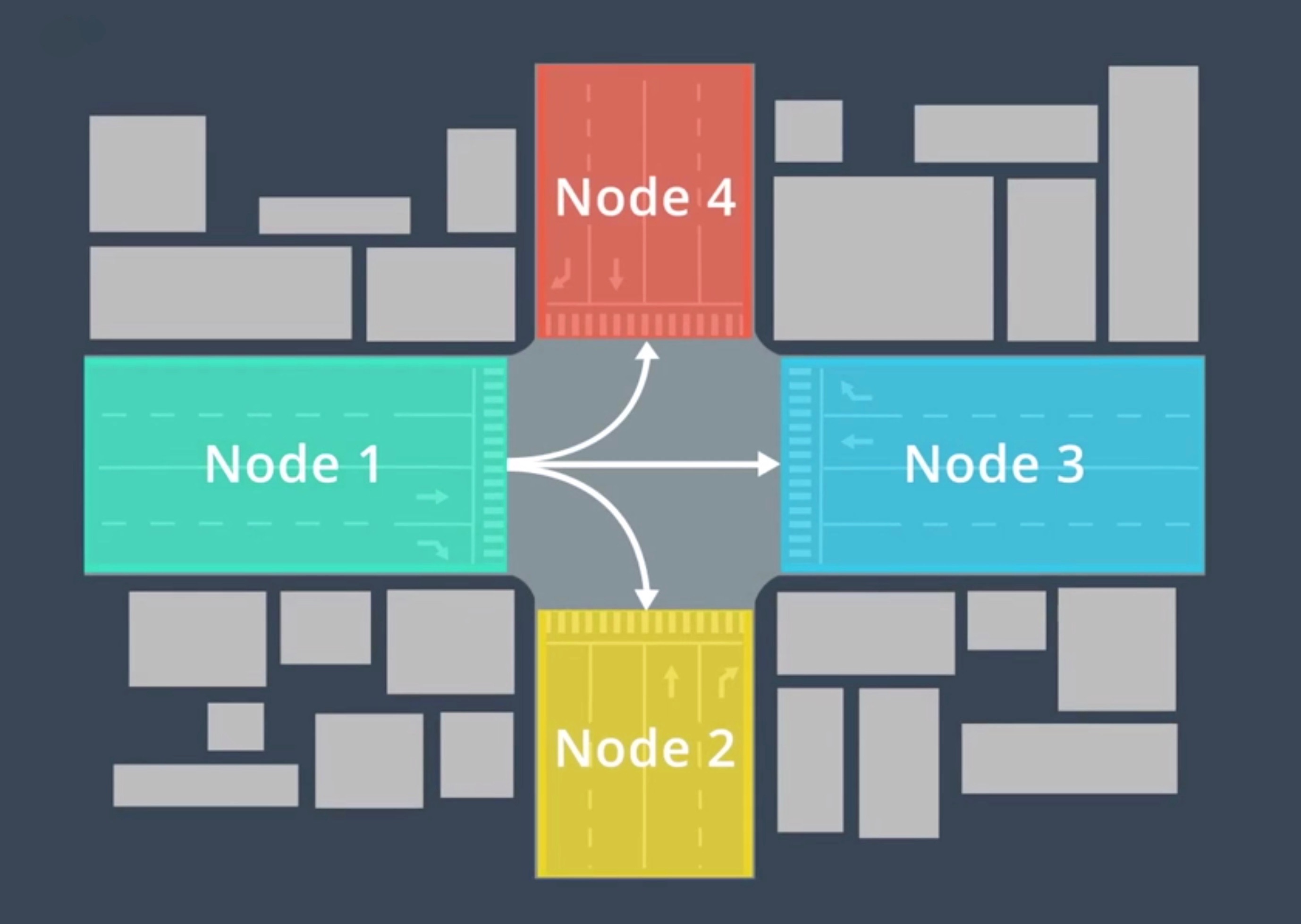 From the source code, we can see that the map structure required by the Routing module is described by TopoGraph, and the initialization of TopoGraph requires a map file. However, the map file is different from the map file required by other modules. The map file here is the data exported from the Proto structure. This is because the Routing module not only needs the Topo structure of the map, but also needs to know the driving cost of each route. This information is included in the Proto structure. In the following content, we will see where the driving cost comes from.

Obviously, there are usually multiple navigation path results for two locations. When calculating the navigation path, you need to have a certain tendency, which is that the smaller the cost of driving, the better. We naturally think that the biggest factor affecting the driving cost is the driving distance.

From another point of view, (when the route has been determined) the driving distance is an objective result of the physical world, which we can't change. However, for how much we care about turning, turning and lane changing during driving, everyone's preferences or each scene are different. This is the configuration file mentioned above "/ apollo/modules/routing/conf/routing_config.pb.txt" is meaningful. The penalty cardinality of these actions mentioned above is configured, and these cardinalities will affect the calculation cost of the route.

By storing this preference outside the code in the form of a configuration file, you can directly adjust the navigation search results without recompiling the code. And it is convenient to configure strategies for different scenarios (for example, the values of these parameters are likely to be different in high-speed environment and urban roads).

A TOPO map is essentially a series of Topo nodes and their connections. Therefore, TopoNode should be able to describe this information. This class contains many properties to store these connection relationships, as shown below:

With this information, you can easily find the line when searching the path.

Then the map files required by the Routing module also need to change together, which naturally requires a module to complete the conversion of Proto format map of the Routing module from the original high-precision map. The TopoCreator module completes this work.

The source code of TopoCreator is located in modules / routing / TOPO_ Under the creator / directory, this is an executable program. The main function code is as follows:

The logic here is very simple, that is, first read the information in the configuration file into RoutingConfig, and then generate the Topo map required by the Routing module according to the HD map file through GraphCreator.

The adjustment of the value in the configuration file (routing_config.pb.txt) will affect the calculation cost of the Topo map generated here, and these costs will be considered when the Routing module actually performs route search, which will affect the final navigation calculation result. The whole process is shown in the following figure: 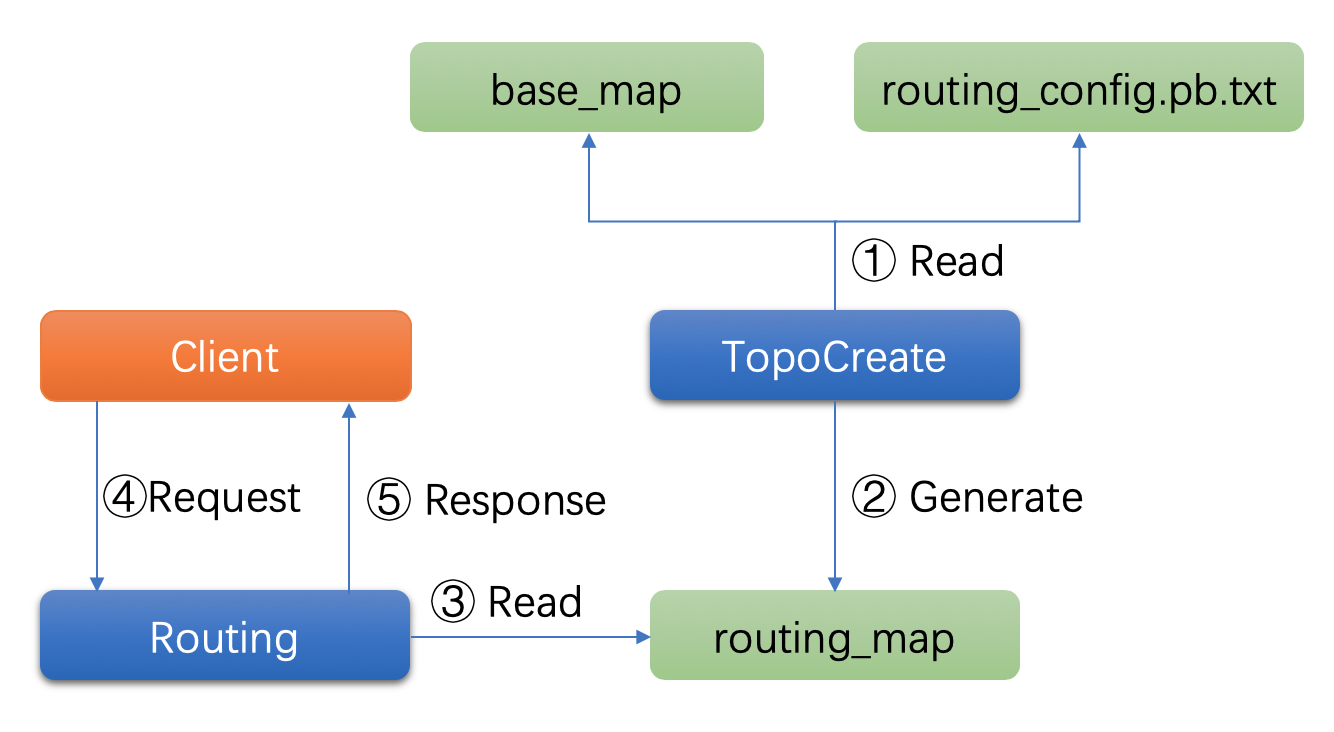 The Routing module is initialized by the Init method. During initialization, the Navigator object will be created and the map will be loaded. The relevant codes are as follows:

The internal of Routing will search the path through the Navigator. Because you need to search the path, Navigator needs a complete Topo map. In its constructor, the loading of the Topo map is completed.

Relevant codes are as follows:

In addition to loading the map, the following two classes of objects are initialized:

The interface for processing routing requests is as follows:

RoutingRequest is defined as follows (we will see the structure of RoutingResponse later):

The key message here is the following:

It describes the path point of a Routing request. repeated indicates that this data can appear multiple times. Therefore, the Routing module supports searching multiple path points at a time.

In some cases, the map may have missing information. In this case, the Routing module supports dynamic addition of some information. This logic is mainly completed through BlackListRangeGenerator and TopoRangeManager. Among them, the former provides an interface to add data, while the latter is responsible for storing these data.

The BlackListRangeGenerator class is defined as follows:

As can be seen from this definition, it provides two interfaces to add data:

Both interfaces will finally add data through the TopoRangeManager::Add interface. The method code is as follows:

The data in the TopOrange manager will eventually be used by the ResultGenerator when assembling search results.

We mentioned navigator earlier. If you browse the code of this class, you will find. Navigator itself does not implement the path search algorithm. It only completes the search process of routing path with the help of other classes.

The related logic is in the Navigator::SearchRoute method. The method code is as follows:

Although this code is long, the main logic is clear, mainly including the following steps:

As mentioned earlier, the RoutingResponse type of search results is also defined in the proto file, and its contents are as follows:

The fourth step of the Navigator::SearchRoute method calls the SearchRouteByStrategy method of the class itself. In this method, the path search will be completed with the help of AStarStrategy.

AStarStrategy class is a subclass of abstract class Strategy. The structure of these two classes is shown in the following figure:

Obviously, this is Strategy design pattern Application of. The purpose of defining the Strategy base class is to easily implement another algorithm to replace the original A * algorithm in the future.

From the name of the AStarStrategy class, we can see that the implementation of this class searches the path through the A * algorithm. We have explained the A * algorithm in detail in another article( A * algorithm for path planning )Therefore, it will not be repeated here.

For readers who do not understand the A * algorithm, you can read that article first. Here is just A description of the key concepts of A * implementation in Apollo.

The key to the implementation of a * algorithm is to calculate Cost, because Cost will affect the final search results. A key factor affecting Cost is the selection of heuristic function. Let's take a look at how it is implemented in Apollo.

The attributes in RoutingResponse are described as follows:

Obviously, the RoadSegment road here is the most important data. This data is actually a three-tier nested structure. Their descriptions are as follows:

Curious readers may find that at this point, we have not mentioned how the Routing module is started.

If you view the Routing module under the root directory BUILD File. You will find that the compiled product of the module is actually a dynamic library (so file), not an executable file.

So how does this module start? The answer is Cyber RT.

Apollo 3.5 completely abandoned ROS and used self-developed Cyber as the underlying communication and scheduling platform. Apollo Cyber RT system is a part of Apollo open source software platform layer. As a runtime computing framework, it is between real-time operating system (RTOS) and application modules. As a basic platform, Apollo Cyber RT supports smooth and efficient operation of all application modules.

The workflow of Cyber RT is shown in the following figure: 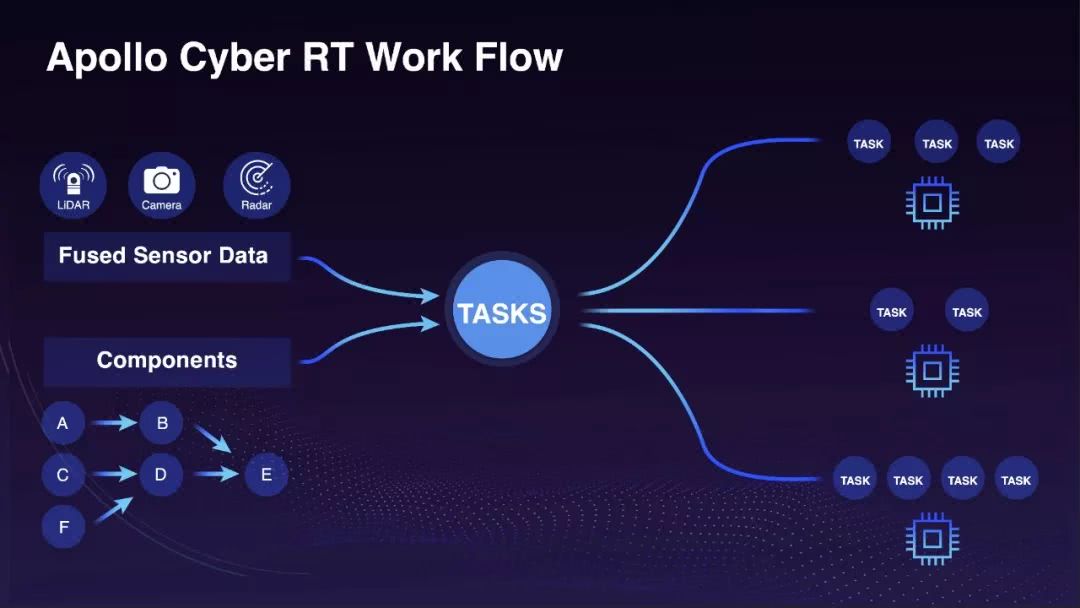 In short, in Apollo 3.5, the startup of each module (including Localization, Perception, Prediction, Planning and Control) is handled by the cyberrt runtime.

If you browse the source code of the Routing module, you will find a dag file with the following contents:

The core concept of Apollo Cyber RT framework is based on components, which have preset input and output. In fact, each component represents a dedicated algorithm module. The framework can generate a directed acyclic graph (DAG) based on all predefined components.

At runtime, the framework packages the fused sensor data and predefined components to form user level lightweight tasks. Then, the scheduler of the framework can dispatch these tasks according to resource availability and task priority.

We will not go further into this part. Interested readers can see the following two links:

At the end of the paper, we describe the main components in the Routing module and their interaction through a diagram. 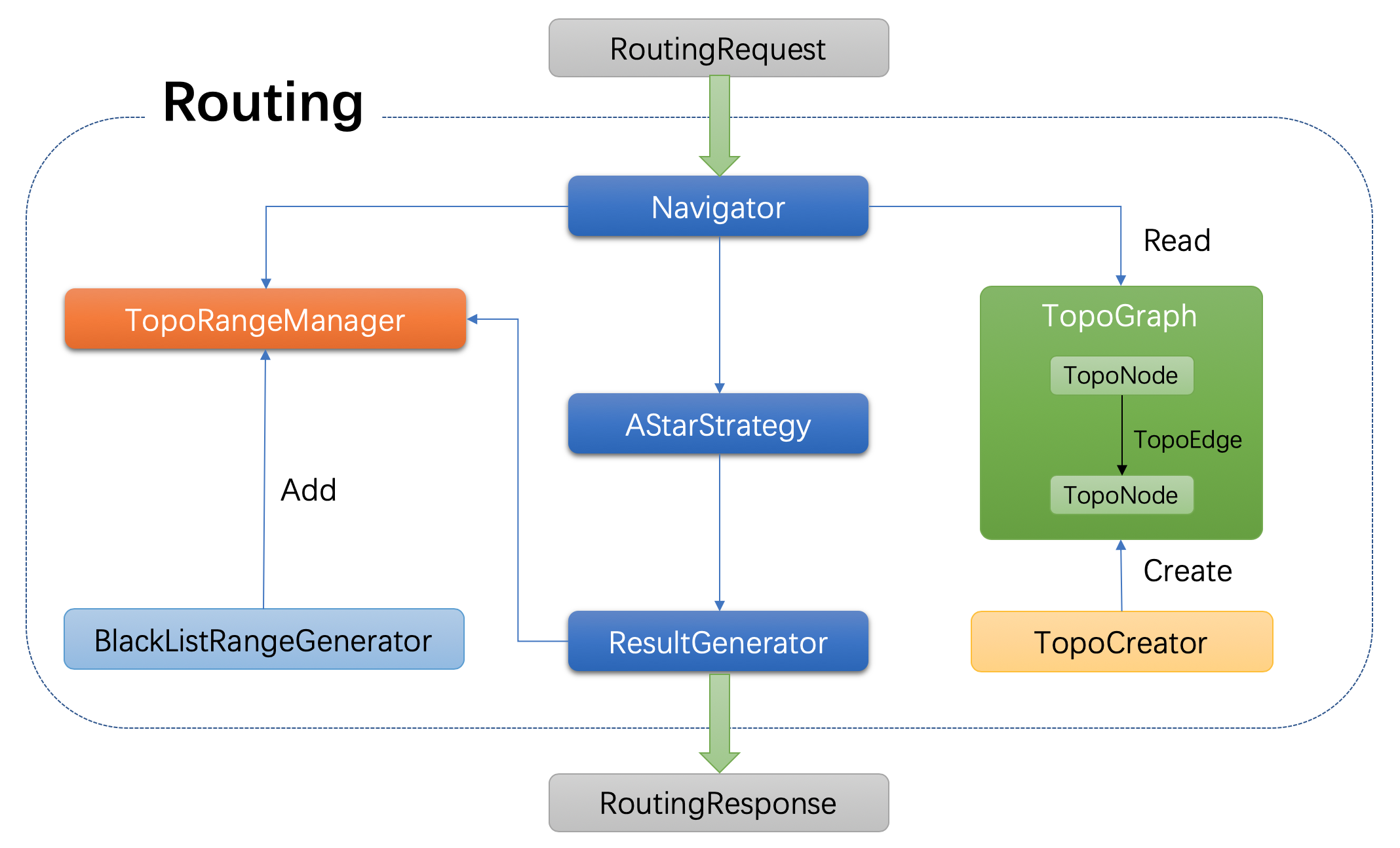